Rereading the Black Legend: The Discourses of Religious and Racial Difference in the Renaissance Empires

The phrase “The Black Legend” was coined in 1912 by a Spanish journalist in protest of the characterization of Spain by other Europeans as a backward country defined by ignorance, superstition, and religious fanaticism, whose history could never recover from the black mark of its violent conquest of the Americas. Challenging this stereotype, Rereading the Black Legend contextualizes Spain’s uniquely tarnished reputation by exposing the colonial efforts of other nations whose interests were served by propagating the “Black Legend.”

A distinguished group of contributors here examine early modern imperialisms including the Ottomans in Eastern Europe, the Portuguese in East India, and the cases of Mughal India and China, to historicize the charge of unique Spanish brutality in encounters with indigenous peoples during the Age of Exploration. The geographic reach and linguistic breadth of this ambitious collection will make it a valuable resource for any discussion of race, national identity, and religious belief in the European Renaissance.
Publisher: The University of Chicago Press, 2008
Website 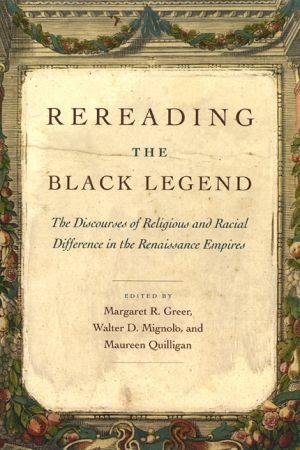