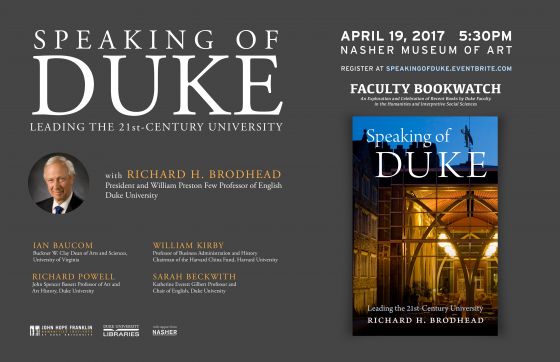 The Franklin Humanities Institute and Duke University Libraries celebrated a book by Richard H. Brodhead, William Preston Few Professor of English and then Duke University President, Speaking of Duke: Leading the 21st-Century University, on Wednesday April 19, 2017, at 5:30 p.m., at the Nasher Museum of Art.

Over the course of his thirteen years as president of Duke University, Richard H. Brodhead spoke at numerous university ceremonies, community forums, and faculty meetings, and even appeared on The Colbert Report. Speaking of Duke collects dozens of these speeches, in which Brodhead speaks both to the special character and history of Duke University and to the general state of higher education.

In these essays, Brodhead shows a university thinking its way forward through challenges all institutes of higher education have faced in the twenty-first century, including an expanding global horizon, an economic downturn that has left a diminished sense of opportunity and a shaken faith in the value of liberal arts education, and pressure to think more deeply about issues of equity and inclusion. His audiences range from newly arrived freshmen and new graduates—both facing uncertainty about how to build their future lives—to seasoned faculty members. On other occasions, he makes the case to the general public for the enduring importance of the humanities.

What results is a portrait of Duke University in its modern chapter and the social and political climate that it shapes and is shaped by. While these speeches were given on official occasions, they are not impersonal official pronouncements; they are often quite personal and written with grace, humor, and an unwavering belief in the power of education to shape a changing world for the better.

Brodhead notes that it is an underappreciated fact that a great deal of the exercise of power by a university leader is done through speaking: by articulating the aspirations of the school and the reasons for its choices, and by voicing the shared sense of mission that gives a learning community its reality. Speaking of Duke accomplishes each of those and demonstrates Brodhead's conviction that higher education is more valuable now than ever. 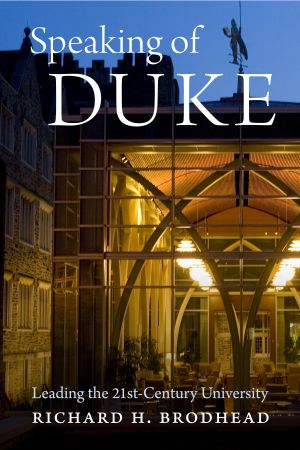