Jesús Ruiz, "'I Burn My Nation': Black Royalists and Monarchical Thought in the Haitian Revolution"

For more on Jesús Ruiz's work, read his interview in our "Meet Your Humanities Faculty" series. Dr. Ruiz describes his journey through the Spanish archives, why he takes a transimperial lens to research the history of Haiti, and why the Haitian Revolution is the most important revolution in the history of the Western Hemisphere.

"What might upholding the throne of the very king whose colony had enslaved them in the first place reveal about the ideological dispositions of former slaves who decided to fight not for a nascent French Republic, but for a dying monarchy? Seemingly old-fashioned appeals to and understandings of monarchical authority and ideas of kingship are at the very core of my current book project. In this talk, I propose to reorient Haitian revolutionary debates from French-, British-, and U.S.-centered interpretations to encompass a broader transnational framework that includes the Spanish Empire and West and Central Africa. It is through this comparative or wide-angle lens that I attempt to examine the complex and varied phenomenon of royalism within the Haitian Revolution. Throughout the documentary record, I find Haiti's famous black rebels looking backward in time and sideways across the Spanish border, even as they looked forward to an uncertain future."

Jesús G. Ruiz specializes in the history of the Haitian Revolution, the Caribbean, Black Atlantic, and Afro-Latin America. He is trained in methodologies from Atlantic, intellectual, and cultural history. His current book project brings these methods together in a trans-imperial perspective. Based on archival research and travel undertaken in Spain, France, the United States, and Haiti, his project traces the movements of multilingual border crossers of uncertain loyalty, and documents the history of royalism and monarchical thought in the Haitian Revolution. In Spain, he's been a visiting researcher and scholar at the Instituto de Historia del Centro de Ciencias Humanas y Sociales (IH-CCHS/CSIC) in Madrid and the Escuela de Estudios Hispano-Americanos (EEHA) in Seville and, in France, at the École des Hautes Études en Sciences Sociales (EHESS) in Paris. He has presented his work in the United States, Europe, and Haiti. His investigations have been supported by fellowships and grants from the Fulbright IIE Program, the Schomburg Center for Research in Black Culture, the John Carter Brown Library, Harvard University’s Mark Claster Mamolen Dissertation Workshop at the Hutchins Center for Afro-Latin American Studies, the Hagley Library & Museum, the School of Liberal Arts at Tulane University, the US Department of Education, and the Tinker Foundation. With a deeply trans-disciplinary formation, Ruiz holds a B.A. from St. Lawrence University and an M.A. from The State University of New York at Buffalo, where he was an Arthur A. Schomburg Fellow. He was recently a Visiting Scholar at New York University’s Center for Latin American and Caribbean Studies from 2018-2019. He is currently an ACLS Emerging Voices Fellow at the Franklin Humanities Institute, History, and Art, Art History & Visual Studies at Duke University. 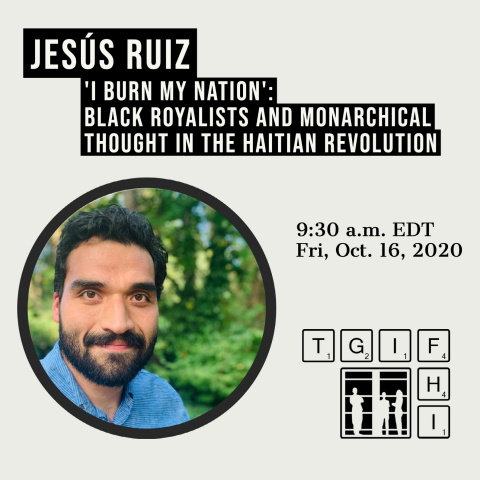