This presentation will relate Social Movements Lab co-directors Michael Hardt and Sandro Mezzadra's ongoing migrant rescue ship project in the Mediterranean (see mediterranearescue.org for details) to other migrant rescue projects (such as No More Deaths in Arizona along the US-Mexico Border) in order to think about migration and borders in a broader context. In particular, it will situate the context of migration in Europe in relation to growing racism and the development of right-wing movements and governments.

This discussion will consider water (or lack of water) as border; the tension between international law, state law, and the law of the sea; and how the state uses landscapes and/or bodies of water as weapons against migrants.

Michael Hardt teaches political theory in the Program in Literature at Duke University. His writings explore the new forms of domination in the contemporary world as well as the social movements and other forces of liberation that resist them.

Sandro Mezzadra teaches postcolonial studies and contemporary political theory at the University of Bologna. He has published widely on the areas of migration, postcolonial theory, contemporary capitalism, Italian operaismo and autonomist Marxism.

Hardt and Mezzadra co-direct the Social Movements Lab at the Franklin Humanities Institute. 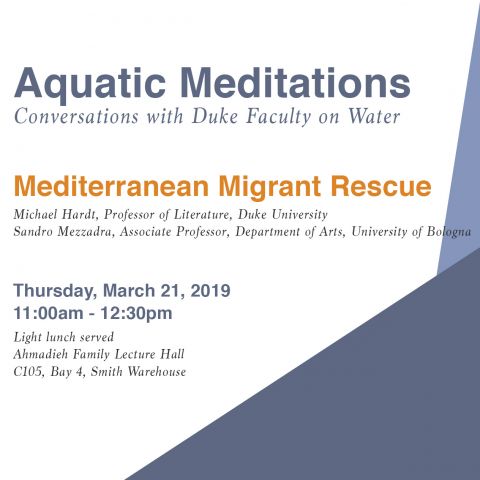