The Seine in the City

The first event in the series Aquatic Meditations: Conversations with Duke Faculty, in response to the question, “What does Water Mean to You?”

In this Franklin Humanities Institute series, we will explore the manner in which water functions in the works of our colleagues in the humanities, arts, and interpretive social sciences from oceanic voyages to lives built around rivers, from aquatic aesthetics to refugee migration, from water shortage to floods, fluidity to flow, and from water conceived through sacred forms to aquatic life-worlds and ontologies, and representations of them. Conceptually, we want to understand what water means in various fields, from the elemental to studies of flow and fluidity in oceanic studies (trade, adventure, piracy, empire, slavery) to thinking about imaginary notions of the transoceanic and multispecies ontologies, oceanic law and the law of the seas. We’re considering form given to water in the arts and culture in consideration of the sacred and the profane, to climate change and what that has done to representation of water including how water is given form.  In a period in which we have become accustomed to understanding change on land through documenting the way land is ploughed, built up, organized, and enclosed in ways that allow us to recognize cultural and civilizational shifts, we often see water as unchangeable, inexhaustible, impervious in some ways.  But what are the ideologies and aesthetics of water? and how do we understand the aquatic variously as element, force, life-source, backdrop, limit, border, space, and place? From our largely terracentric view of the world, how do we see how water has been given shape?

Anne-Gaëlle Saliot’s book, The Drowned Muse (OUP, 2015) is a study of the extraordinary destiny, in the history of European culture, of an object which could seem, at first glance, quite ordinary in the history of European culture. It tells the story of a mask, the cast of a young girl's face entitled "L'Inconnue de la Seine" (the Unknown Woman of the Seine), and its subsequent metamorphoses as a cultural figure. Legend has it that the "Inconnue" drowned herself in Paris at the end of the nineteenth century. The forensic scientist tending to her unidentified corpse at the Paris Morgue was supposedly so struck by her allure that he captured in plaster the contours of her face. This unknown girl, also called "The Mona Lisa of Suicide," has since become the object of an obsessive interest that started in the late 1890s, reached its peak in the 1930s, and continues to reverberate today. 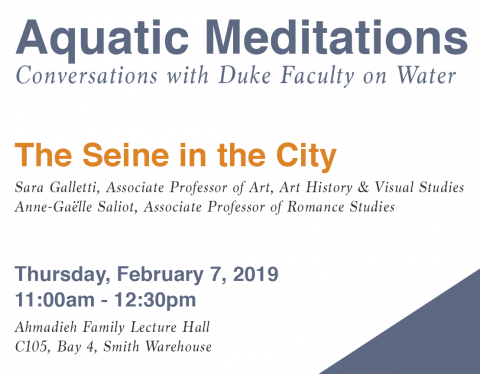