Seminar on Glas, Session I: On the Presence of the Corpse

Speaker(s):
Ranjana Khanna; Miriam Leonard
END_OF_DOCUMENT_TOKEN_TO_BE_REPLACED
Please join the Franklin Humanities Institute at Duke University for the virtual colloquium “Antigone’s Worldings," with events running between October 14 and November 5, 2021. To read about all events in this colloquium, visit https://fhi.duke.edu/antigonesworldings
Seminar on "Glas"
Session I: On the Presence of the Corpse
Ranjana Khanna and Miriam Leonard
A new translation of Jacques Derrida’s Glas has given us the opportunity to revisit this groundbreaking experimental text. In Glas, Derrida juxtaposes readings of Hegel and Jean Genet in pursuit of a form of difference that resists dialectical synthesis, while helping us to understand the kind of work that is mourning, and the kind of mourning that is perhaps involved in any kind of work. Led by a set of interdisciplinary feminist theorists (Ranjana Khanna, Miriam Leonard, Tina Chanter, Caroline Rooney, MD Murtagh and Andrés Fabián Henao Castro), we will focus on how to understand the challenge that the presence of the corpse represents for the living (Session 1), expand on Derrida’s analysis of Hegel’s fetishizing of Africa (Session 2), and rethink sexual difference through Derrida’s reading of Genet’s literature (Session 3).
Reading:
For the seminar on Glas, you can use either the old Nebraska translation, if you have it already, or get the new translation from Minnesota Press, titled, Clang, which is also more affordable. Here are the primary sections for this session:
A limited number of copies of the Minnesota edition of Glas are available to Duke University students, faculty, visiting scholars, and staff. Please fill out this survey if you plan to attend the event and would like a copy of the text:
Ranjana Khanna, Professor of English, Literature, and Women’s Studies at Duke University, was appointed Director of the John Hope Franklin Institute in 2018. Khanna is a literary critic and theorist recognized for her interdisciplinary, feminist, and internationalist contributions to the fields of post-colonial studies, feminist theory, literature, and political philosophy. She is best known for her work on melancholia and psychoanalysis, but has also published extensively on questions of postcolonial agency, film, Algeria, area studies, autobiography, Marxism, and visual and feminist theory. Khanna is the author of Algeria Cuts: Women and Representation, 1830-Present (2007) and Dark Continents: Psychoanalysis and Colonialism(2003). Her theorization of subjectivity and sovereignty, including her recent work on disposability, indignity, and asylum, engages with the work of diverse thinkers, including Derrida, Irigaray, Kant, Marx, Heidegger, Beauvoir, and Spivak. She served as the Margaret Taylor Smith Director of Women’s Studies from 2007–2015.
Miriam Leonard is Professor of Greek Literature and its Reception at University College London. Her research explores the intellectual history of classics in modern European thought from the eighteenth century to the present. She is author of Athens in Paris: Ancient Greece and the Political in Post-War French Thought (OUP, 2005), How to Read Ancient Philosophy (Granta, 2008), Socrates and the Jews: Hellenism and Hebraism from Moses Mendelssohn to Sigmund Freud (University of Chicago Press, 2012) and Tragic Modernities (Havard University Press, 2015). She is editor of Derrida and Antiquity (OUP, 2010), Laughing with Medusa: Classical Myth and Feminist Thought (Oxford 2005) with Vanda Zajko and Tragedy and the Idea of Modernity (OUP, 2016) with Joshua Billings.
This colloquium is organized by Andrés Henao Castro. It is presented by the Franklin Humanities Institute with additional support from the Josiah Charles Trent Memorial Foundation. Cosponsors are the Department of Art, Art History and Visual Studies; the Department of Asian and Middle Eastern Studies; Department of Classical Studies; the Department of English; the Program in Gender, Sexuality, and Feminist Studies; the Department of German Studies, the Department of International Comparative Studies; the Program in Literature, the Department of Romance Studies, as well as the Center for Latin American and Caribbean Studies and the Islamic Studies Center, all at Duke University. Additional cosponsors are the Institute of the Humanities and Global Cultures at the University of Virginia, and the Academy of Global Humanities and Critical Theory, a research entity jointly promoted by the University of Virginia, Duke University and the University of Bologna.
END_OF_DOCUMENT_TOKEN_TO_BE_REPLACED 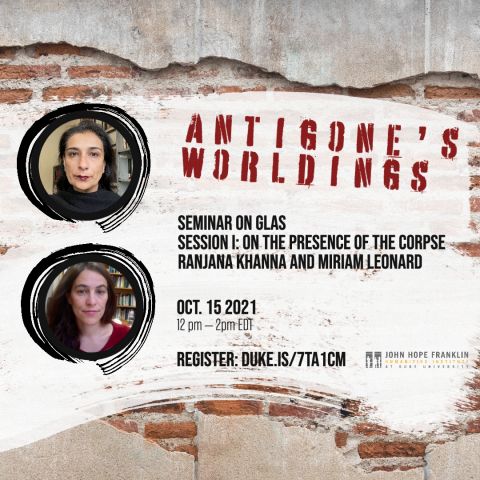