Trump, Russia and Spies: What do we know now?

In 2017, New York Times investigative journalists Matt Apuzzo and Adam Goldman came to Duke, fresh off their investigation into the firing of FBI Director James Comey, for an electric and revealing conversation about a burgeoning political crisis. Now the Pulitzer Prize winners are back after a year of explosive developments, to take stock of what's happened since, and where the scandal engulfing the Trump White House, the Kremlin, and our democratic system might be going. This is not a conversation to be missed.Join the DeWitt Wallace Center on Wednesday, April 11 from 5:30-6:45 p.m. This discussion will be moderated by Professor Jonathan Katz in the Holsti-Anderson Family Assembly Room of Perkins Library. Enzos will be provided!RSVP so we know how much pizza to order:https://bit.ly/2qaQEWe 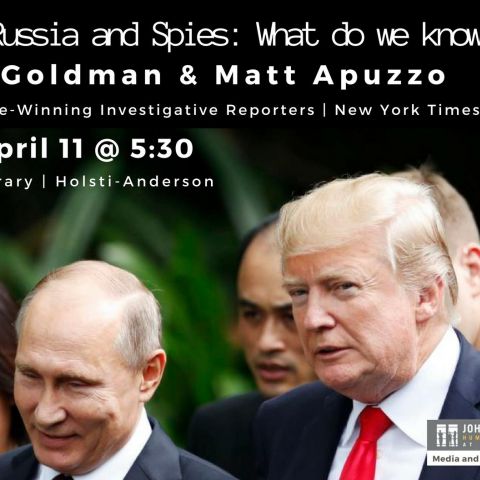