On January 16, 2020, From Slavery to Freedom Lab at the Franklin Humanities Institute welcomed Titus Kaphar at the Nasher Museum of Art as the keynote speaker of its two-day “Black Images, Black Histories” Conference. This event brought together art historians, scholars, and curators to explore iconic images and popular constructions of blackness in culture.

A contemporary artist and painter, Kaphar has used sculpture and painting to confront this history and to lift up that which has been erased from the national picture. By crumbling, shredding, cutting, altering, and smearing his canvases, Kaphar unearths untold histories and forgotten stories, challenging the dominance of white subjects in the canon of art history. Kaphar earned an MFA from the Yale School of Art and received the Gwendolyn Knight and Jacob Lawrence Fellowship. His work is in the collections of the Museum of Modern Art and the Studio Museum in Harlem, NY, among others.

During an onstage conversation with Dr. Jasmine Cobb, Associate Professor of  African & African American Studies and of Art, Art History and Visual Studies at Duke University , Kaphar emphasized the deeply intimate nature of his art. While his art is certainly intended to generate social commentary, Kaphar noted that it also tells a personal story. Years ago, Kaphar learned about his family’s roots at a particular planation, which compelled him to think about the role of slavery in how it has shaped his family’s history and that of the nation. His art work tells an American story, which is deeply, and often painfully, his own.

Kaphar shared how personal experiences have shaped his art work. During his time at Yale, for instance, the faculty criticized him for his inability to paint according to the conventions of the discipline. Determined to improve his technique, the artist went back to “the masters” of the craft in order to understand how to produce work in a way that “speaks their language.” For this reason, he said, he always finds himself “back there,” using art history and the archive as a point of departure for many of his works.

Kaphar’s famous series on American presidents was also inspired by a personal encounter. Once, someone described Thomas Jefferson to Kaphar as “benevolent slaveowner.” The choice of words impacted Kaphar so much, he said, that he went back to his studio and started painting, not yet knowing what the final result would be. Now widely famous, his painting “Beyond the Myth of Benevolence” (2014) features a portrait of Thomas Jefferson hanging loosely from a stretcher, revealing an image of a black woman glancing at the viewer from the half draped canvas.

"The woman who sits here is not just simply a representation of Sally Hemings,” Kaphar explained in another interview, "she’s more of a symbol of many of the black women whose stories have been shrouded by the narratives of our deified founding fathers." Similarly to his other works, the painting reveals that which has been whitewashed from American history.

Interestingly, whitewash is also one of the techniques that Kaphar employs in his art, brushing and smearing wide strips of white paint across his painting’s subjects. While some have called Kaphar’s method aggressive, Kaphar disputes this, explaining that it’s a “meticulous process.” Kaphar also crumbles, shreds, and collapses many of his paintings.

Kaphar explained his technique with another anecdote about a harsh critique of his work, during which someone claimed that painting as a mode of expression was “dead,” Kaphar said he decided to “perform an autopsy.” "The question [is] no longer how to make a painting about torture,” he said, evoking the history that his work seeks to complicate, “but what does it mean to torture a painting?”

Kaphar's process of painting Ferguson protestors—whitewashed—in "Yet Another Fight for Remembrance" (2014) is documented in this video by Horacio Marquinez. 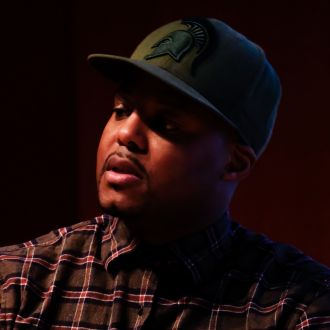