Amit Chaudhuri: "The Strangeness of the 'World' and How We Encounter It"

As part of its World Arts series, the Franklin Humanities Institute was pleased to welcome Amit Chaudhuri during the week of September 23, 2019. Amit Chaudhuri is a novelist, poet, essayist, artist, musician, literary activist, and Professor of Contemporary Literature at the University of East Anglia.

Over a number of events, Chaudhuri explained that when we encounter the Other through the construction of World Arts, we do not gain mastery of the cultures of the world. Instead, it is through investigating our “mishearings”—how we respond to the forms and material processes of the Other—that we encounter ourselves.

“This is Not Fusion”

Born in Calcutta and raised in Bombay, Amit Chaudhuri grew up preferring pop and rock to Indian classical music, the way “you would expect a child to be,” he said, “unless there’s something wrong with them.” He purchased records by The Who and picked up the guitar at age twelve. By the time he turned fifteen, he was a serious singer-songwriter.

At sixteen, his pursuit shifted. Spending more time listening to music he’d never heard before, Chaudhuri re-discovered the Indian classical music that disinterested him as a child. Around the same time, his mother, Bijoya Chaudhuri, who was an acclaimed singer, began to learn devotionals from the late Pandit Govind Prasad Jaipurwale. Amit Chaudhuri started to learn as well.

By twenty-one, Chaudhuri stopped listening to Western pop completely. During his performance at the Rubenstein Arts Center, he quipped that although he attended university in England, “it became easy to stop listening” to Western music due to the predominance of bands like Frankie Goes to Hollywood and Culture Club. (It was 1983.)

In 1999, after sixteen years of eluding Duran Duran, Chaudhuri returned to Calcutta, where he revisited his record collection. He listened to Jimi Hendrix’s posthumous blues recordings.

Through a series of “mishearings,” Chaudhuri experimented improvising with classical Indian forms and predominant Western tones in jazz, rock, and the blues—where the structure of the raag converges with the structure of the Western pentatonic found in songs like “Layla,” George Gershwin’s “Summertime,” and The Beatles’ “Across the Universe." "Layla" and "Summertime" went on to appear on Chaudhuri's first CD release: This is Not Fusion.

“The Strangeness of the ‘World’ and How We Encounter It”

In his keynote presentation at the Franklin Humanities Institute, Chaudhuri observed that the Global World—the “laterally interconnected network created by globalization”—has made it increasingly difficult to imagine the experience of everyday life in ordinary neighborhoods.

During a semester teaching at Columbia, Chaudhuri would board Greyhound buses to escape the city. While gazing at passing streets, he fantasized about the experience of “the ordinary” he might find in those neighborhoods. Walking down a street in an ordinary neighborhood “didn’t represent a departure in the sense of a spaceship going to the moon … It was something you knew but did not know.”

Chaudhuri expressed that through globalization, we’ve lost the imagination of “the ordinary” to information and surveillance. By using a credit card or cell phone, your location is immediately disclosed, yet it is rare to truly know the neighborhoods that surround you. When we can access endless information about a place, wandering through an unfamiliar neighborhood presents, less and less, “a departure in the midst of the known.”

At a time when everything is seen, Chaudhuri reflected: “What I lost was concealment.”

What eventually relieved his anxiety of “losing [his] sense of departure” was travel, especially through Europe, where he saw provincial forms, traditions, and ambitions preserved and kept secret from the Anglophone world. He saw, in localities not yet beholden to the Global, the imagination of “the ordinary” persisting.

Chaudhuri reflected that World Arts have lost a sense of “the ordinary.” He asked what the Global World has “done to the arts” through the constructions of World Cinema, World Music, and World Literature.

He noted that World Cinema occupied a “far corner” in HMV shops, which, these days, are sparse relics of the video rental era in Britain. Chaudhuri recalled, “You had to make your way through everything, and ask somebody, ‘Where is World Cinema?’ They’d point you to an obscure corner.” World Music was even more sequestered: “You had to go to the big [shop] on Oxford Street. You had to go to the fourth or fifth floor.”

Through World Cinema, Chaudhuri explained, while it’s possible to encounter the formal traditions of the “filmmaking nations” of the world, “you have to look hard,” beyond the “shelves in the back of the HMV.” World Cinema is marginalized within cinema: “In this construct, the ‘world’ [is] a suburb of the ‘Global.’ It [is] a poor suburb.”

Chaudhuri then expanded on World Music, in which local forms and traditions are not only marginal, but indistinguishable. World Music amalgamates local “tribal” and found sounds to present merely the “residue of an idea of locality.” While African forms may sound distinct from Latin American forms, World Music does not offer a sense of locality more accurate than the continental. It does not conjure ordinary “neighborhoods,” but “World.”

Chaudhuri continued by expanding on the problem posed by World Literature, through which he offered a reframing of how we engage with the world and its arts. He reflected that the form of the World Literature anthology tasks the reader with expending “infinite labor to achieve mastery” over the world.

Asserting that grasping all of the world is not how to encounter it, Chaudhuri referenced Borges’ map, which encompasses the world in a single paragraph. Borges ironizes the idea that reproducing the world is the same as knowing it, which Chaudhuri noted is a legacy of the European Renaissance.

Rather than attempt to know and master the “World,” Chaudhuri seeks to inhabit the world of the “miniature”: “A book is not only a world because it contains a world, but because it’s embedded in a world, and opens out into the world it’s embedded into. The world it’s situated in is a complex tissue of argumentation and decision-making that resulted, on the author’s part, in the book, and the fact that it took a particular form, and not another one.”

According to Chaudhuri, we become entangled with the world’s “complex tissue” not through its mastery, but through “small openings”—in the lines of a book, or by walking down an ordinary street in an unfamiliar neighborhood.

Encountering ourselves through the Other

Chaudhuri suggests that we take note when we are receptive to the forms and traditions of the Other, and then consider why.

He told the story of Satyajit Ray, the legendary filmmaker whose works shaped both Indian and World Cinema, upon Ray's first encounter with Rashomon, which screened in Calcutta twelve years after its premiere in Venice in 1951. According to Chaudhuri, Ray, not knowing much about Japan, went to the film “looking for Japan.”

Instead of Japan, Ray encountered material traditions of form and process. He shifted his question, to asking himself why the formal qualities of the film spoke to him. He had to “[entangle] his own history, his own decisions—which have made him the kind of person he is—with those that make the film.”

The reason why our encounters with the world are significant has “nothing to do with our usual presumptions” that we should know the Other and master the world, Chaudhuri said. His first mishearing of raag Todi as “Layla,” his experience of the “imagined ordinary” of neighborhoods along his bus route, his inhabiting of the world in “miniature”: he views all of these small openings—the ways we respond to our encounters with World Arts—as telling us something about ourselves.

Abandon “what you think the world should be,” Chaudhuri said, and respond formally.

View the presentation and listen to the performance in their entireties below.

In 2014, Amit Chaudhuri organized the inaugural "Literary Activism" Symposium. In August 2020, essays from the symposium were published online by Oxford University Press and the University of East Anglia's Boiler House Press. Essays from the four subsequent symposia between 2016–2020 will continue to be published over the next few months.

"...one has to, on the one hand, eschew celebrity and book signings in favour of dialogue and response; on the other hand, steer clear of the closed professionalism of the conference and open out the conversation to people from a variety of disciplinary backgrounds who have a stake in the discussion."

Read the essays and poems, and subscribe to the newsletter: http://www.literaryactivism.com/

In May 2020, as part of a series of performances in the time of Covid-19, the Royal Opera House, Mumbai released a 30-minute excerpt from the film A Moment of Mishearing, directed by Don Boyd. Listen to "The 'Layla' Riff to Todi," "Summertime," and "One Fine Day" performed live at King's Place, London in 2012 below. 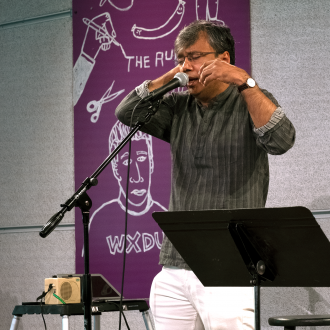 Amit Chaudhuri presented at the Franklin Humanities Institute as part of the World Arts series, and performed at the Rubenstein Arts Center over the course of the week of September 23, 2019. Photo by Jennifer R. Zhou.