Last month, I had the privilege of joining a student lunch with world-renowned architect Sir David Adjaye at the Franklin Humanities Institute, as part of his visit to Duke University to deliver the 2019 John Hope Franklin Lecture. Sir Adjaye spoke with us about his work not only as an architect, but as a self-described humanist who believes we can craft a better society by implementing infrastructural changes that affect our experience of the world around us.

Sir Adjaye shared with us how he views the power of architecture to shape the world—specifically, via programmatic design. Comparing the growth of a city to a cell that grows, dies, and is renewed, he sees architecture as a system that is constructed to create certain types of citizens, promoting culture, ability, and individuality. He encourages every generation to become involved with their built environment. One’s level of responsibility and sense of ownership changes when one is involved with the space one calls home.

For this reason, Sir Adjaye includes community engagement in his design process. In 2015, he designed a mixed-use affordable social housing scheme in Harlem, known as the Sugar Hill Development. Sugar Hill was purposefully designed with its residents in mind; he kept them an active part of the project’s development. It includes a children's museum of art and storytelling and a childhood education center in addition to 124 social housing units..

One topic raised during the discussion was gentrification. Sir Adjaye made the poignant remark that gentrification often comes as a result of the market reevaluating a space as beautiful and therefore profitable. However, redesigning or re-beautifying a space does not have to mean gentrifying it. There needs to be a conscious effort by legislators and architects to embed native residents rather than displace them.

I’m so excited to share that I have had the fortune to meet esteemed architect Sir David Adjaye this past Thursday at Duke University, where me as well as a small group of students were able to have lunch and a discussion with him. Adjaye is best known for being the lead architect of the National Museum of African American History and Culture in DC. It was amazing to be able to meet and have a conversation with someone who has such a strong role in designing such empowering buildings #davidadjaye #nmaahc #dukeuniversity

As students now embedding ourselves in Duke University and with it, Durham, we have to be cognizant of what the betterment of our space means. Harmonious progress towards better cities and better facilities requires a collaborative desire to move together rather than apart. We appreciate what we learned from Sir David Adjaye and have a better understanding of not only how we form our spaces, but how our spaces form us.

I also related to Sir Adjaye’s desire to do purposeful work that benefits a wider community. Through my major in the humanities, I am constantly questioning how our world is influenced and formed by the media we consume and create. I am conscious of how individuals and communities use literature to guide them. To borrow from Sir Adjaye’s words, it’s imperative that we design bodies of work in literature to include stories that reflect the kind of humanity we want our children to grow into, and eventually become.

Omolola Sanusi is a junior at Duke University studying Global Cultural Studies in the Program in Literature with a concentration in film and media studies. She is also pursuing a certificate in Arts of the Moving Image and Decision Sciences. She is interested in the creation of narratives and exploration of humanity through storytelling, filmmaking, and data. She hopes to one day converge her studies towards a professional career in creating stories through various mediums. 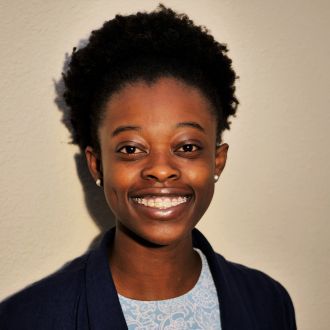