The Forgotten: An Open Call for Collaborators

Torry Bend and Craig Quintero invite you to plunge into the unknown. The two theatre directors are extending an open call for collaborators to join them in developing an experimental multi-media performance that will premiere at the Reynolds Theatre from April 18-20, 2020. The production, The Forgotten, is created in remembrance of the hundreds of thousands of workers lost to the global coal mining industry and to protest the continued negligence of worker safety and environmental exploitation for profit.

Craig Quintero is the Artistic Director of Riverbed Theatre Company in Taipei and an Associate Professor of Theater and Dance at Grinnell College. He is currently in residence at Duke University through the Visiting Faculty Fellowship funded by Humanities Unbounded. Torry Bend is a set and puppet designer and Chair of Theater Studies at Duke University.

On October 10, 2019 at the Rubenstein Arts Center, Bend and Quintero gave a presentation introducing their project and announcing an open call for additional collaborators for The Forgotten.

When Bend and Quintero first met in late 2018, they were immediately drawn to the shared poetic imagery in their work and the manner in which they use performance to create dream-like, surreal worlds

Quintero recalled the detailed intimacy of Bend’s puppetry as “theatre magic at its best.” For Bend, Quintero’s performances felt “artistic, gestural, and poetic, without being immediately narrative.”

Bend and Quintero initially intended for their project to focus on Black Mountain College’s unique pedagogical approach and community-based learning, but over the course of their early discussions, Bend and Quintero started to gradually move away from developing a show based on Black Mountain College to focusing on the literal “black mountain” of the coal mining industry.

In their talk at the Rubenstein Center, Quintero cited three mining accidents in 1984 in Taiwan that took the lives of 268 workers. He showed an image from Reflection of Li-Fong Coal Mine, a performance by Taiwanese artist Kao Jun Honn, in which the artist tries on a series of coal miners’ jackets, each coating his body in another layer of ash—a visual and literal metaphor for the effect of coal on the body.

Bend added that in North Carolina as well, the land and people suffer from the increasing risk of natural disasters that induce coal ash spills.

In 2015, Duke Energy Corporation was fined $102 million for spilling toxic ash into miles of the Dan River between North Carolina and Virginia. Since then, the corporation has continued to attempt to hike rates to cover the cost of clean-up. It proposed a rate hike on September 30, 2019 for an average increase of 6.7 percent for residents, exceeding the proposed increases for commercial (5.1 percent) and industrial (4.8 percent) customers.

Bend and Quintero cited the current White House’s endorsement of the revitalization of the U.S. coal industry and the simultaneous failure to extend an excise tax that aids former miners disabled by black lung disease as other reasons that this performance project became increasingly pressing.

As Bend and Quintero noted, there’s no accurate statistic on the number of deaths resulting from the global coal industry. Likewise, scientists are still working to quantify the extent of health issues caused by and exacerbated by proximity to coal ash.

The Forgotten tells the stories that often get lost in the incomplete figures and statistics. The project proposal states: The Forgotten  is “a call to arms in the face of global warming, an indictment of the excesses of the privileged class, a remembering of the forgotten.”

Bend’s usual process begins with writing a script and selecting collaborators whose interests align with the material. With The Forgotten, Bend and Quintero’s “script” is still developing and evolving as collaborators introduce new ideas.

In the tradition of Black Mountain College, they are looking for additional collaborators with diverse training and experience to add their unique aesthetics and experiences to the creative process. Through this open, living process, Bend and Quintero hope that they can continue to “surprise themselves” and break out of traditional modes of artistic expression.

Bend and Quintero believe that the saturation of media reports on global warming has led to a general malaise regarding environmental issues in which many people have slipped into a passive attitude about these concerns. As artists, Bend and Quintero are interested in developing a production that approaches these familiar issues from a new perspective, that defamiliarizes the familiar. Their challenge is to create a performance that “gets into the audience’s heart and stays.”

Next steps | Open call for collaborators

Bend and Quintero seek additional collaborators to join their “step into the unknown.” This call is open to dancers, musicians, actors, sculptors, video artists, singers, and painters from the Durham community. All levels of experience are welcome.

The Forgotten Collaborators from Riverbed Theatre on Vimeo.

According to the project proposal, The Forgotten will be performed from April 18–20, 2020 at Reynolds Theater at Duke University. In October of 2020, the show will be remounted at Roberts Theatre at Grinnell College in Iowa. Bend and Quintero are currently applying to stage the show as part of the Autumn Festival at Taiwan’s 1500-seat National Theatre in 2021. 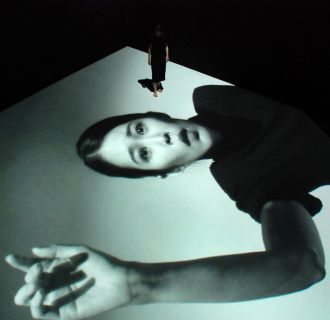