Looking Back on Left of Black's Season 12: A Reflection on the Origins of Black Studies

Alexis Ligon Holloway, a graduate student in Cultural Anthropology at Duke, works as the Social Media Coordinator for Left of Black. In the reflection that follows, Alexis considers her work on Season 12 of the show as we prepare for the upcoming release of Season 13 (10/13/22).

As a graduate student who works at the intersection of Black Studies, Anthropology, and Music, I found this past season of Left of Black, founded and hosted by Dr. Mark Anthony Neal, especially exciting to witness. As an undergraduate, I did not have many chances to engage with Black scholars in my normal coursework, and was initially overwhelmed by the sheer volume of the discipline of Black Studies (where to start?!). My journey throughout grad school has been oriented around familiarizing myself with Black scholars and learning about the important contributions of my intellectual forebears. This past season of Left of Black greatly aided in my scholastic journey. Not only was I in awe of how Dr. Neal was able to devise questions that opened the door for these authors and intellectuals to expand on certain arguments housed within their books; he also approached their work with a sense of respect that was clearly matched by the guests on his show. As Daphne Brooks noted in her discussion of her book, Liner Notes for the Revolution (2021), “I would never underestimate the formidable nature of your questions, Dr. Neal, or the beauty to them.”

Many of the episodes in Season 12 engaged with the history of Black Studies, providing audiences with a deeper understanding of the field's origins, as well as the many ways that the discipline has developed through the work of formally and informally recognized scholars and activists. For instance, Bianca Williams and Armond Towns talk about the conditions under which plantation logics were founded, maintained, and reproduced during the period in the 20th century when western knowledge constructs “fractured the world.” Their edited volume, Plantation Politics and Campus Rebellions (2021), argues that the logics that structured plantation-era America are the same epistemologies that provide the ideological foundation for the ways that American universities and higher education institutions operate. Williams, Towns, and Dr. Neal discuss the connection between the plantation and knowledge production, and Dr. Neal astutely highlights the response to plantation politics in universities through what he calls the “DEI moment.” As Williams notes, the ways that young people are beginning to name their racialized experiences and assert that they know what they are lacking in their education marks a recent shift in movements for Black justice and perhaps the ways that we should write about them. The arguments that Towns and Williams discuss are incredibly poignant, especially for graduate students, as across the country we have been mobilizing to unionize and protect our labor and our bodies within the university system. Now more than ever, graduate students at Duke have been working with supportive faculty and administrators to receive adequate health care, access to affordable parking, and compensation for the work that keeps the university running. These issues have become more pressing than ever considering the rising cost of living and the increasingly precarious job markets we are entering. Through a compassionate act of recognition, Williams and Towns stress the importance of campus rebellions, and the incredible potential for change that student activism fosters.

Another episode that I found to be particularly salient was Moya Bailey’s discussion of her work, Misogynoir Transformed (2021). At the time that this episode aired, I had recently completed departmental milestones for PhD candidacy, and was absolutely gobsmacked when I learned that Moya Bailey devised the concept of misogynoir as a graduate student! For an idea to have taken off in both formal and informal academic spaces, as well as digital platforms and in discussions surrounding popular culture, is a scholar’s dream, and Bailey achieved that before she even received her degree. The academic and popular mobilization of this term is well-deserved, considering the myriad ways that this concept has impacted Black studies and many other disciplines. "Misogynoir" encapsulates so many different experiences with which Black women regularly grapple. However, as Dr. Neal notes, Bailey’s critique comes from inside Black culture, as a loving critique from someone who appreciates Black music and popular culture. (Perhaps Bailey practices what Tina Campt has called the Black Gaze: a gaze that puts one in relationship to both Blackness and anti-Blackness in a way that requires one to do a certain kind of ethical and affective work; a way of looking alongside.) Bailey extends this ethical ethos to her work that lives in the digital realm, citing the violence of the digital supply chain, and specifically underlining the exploited labor of young Black children's supplying the pop-cultural materials that populate the digital realms, especially within social media.

The scholars featured in Season 12 are often in conversation with one another in a way that recalls Daphne Brooks's articulation of the role of the arts: as a site where revolution can unfold. Although Brooks is largely thinking within the context of Black women singers, her definition of citationality captures the overarching connectivity of these scholars: the ability to weave together a tapestry of conversations that the vocalist (or in this case, scholar) is having with their influences across time. Every scholar this season approaches their work with an ethic of care that reverberates off the pages and into other realms of Black life. The impact of Season 12 is palpable, and only makes the continuation of Left of Black not only necessary, but also exciting. As one of the bridges between the show and the audience, I am deeply invested in my role as the social media coordinator for Dr. Neal. It has been an enjoyable challenge to find ways to encapsulate the essence of each episode and visually represent the intellectual contributions of each scholar. For this coming season, I look forward to using more of my skills as a multi-modal scholar and filmmaker to further engage Left of Black's audiences. 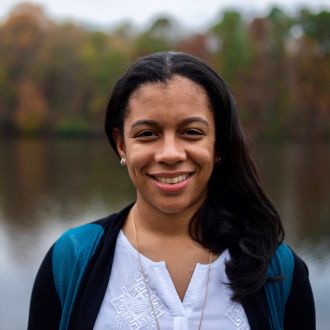