In Slavery Unseen, Aidoo challenges the narrative of Brazil as a racial democracy, arguing that this elides the stories of same-sex and interracial sexual violence during slavery that he uncovered in multiple sources over the course of his research – “people and stories I wasn’t prepared to encounter,” he says. The book argues that the “myth of racial democracy,” rather than reflecting racial progress, serves to “uphold the heteronormative white patriarchy throughout Brazil’s past and on into the present."

The Department of Romance Studies invited four guest speakers to present comments on the book at a symposium on March 29, 2018, including Sander Gilman and Farah Jasmine Griffin, the two external senior scholars who led the 2013 workshop of Aidoo’s draft manuscript, Christopher Dunn, and Salamishah Tillet.

“As with the best work in African American and African Diaspora Studies,” Griffin said, praising the book’s methodology, “Slavery Unseen is a model of interdisciplinary scholarship that underscores the importance of bringing various methods of analysis to bear upon discussions of race, slavery, and their relationship to constructions of national identity. He builds his argument through the use of multiple sources including inquisition records, novels, travel accounts, and visual narratives. But, as a scholar of literature and language, to all of these he brings a skill of close reading, theoretically informed, but always grounded in the specificities of time and space, of history and region.”

The FHI looks forward to welcoming Aidoo in Fall 2018 as one of the co-directors of the new humanities laboratory “From Slavery to Freedom: Representations of Race and Freedom in the African Diaspora.” 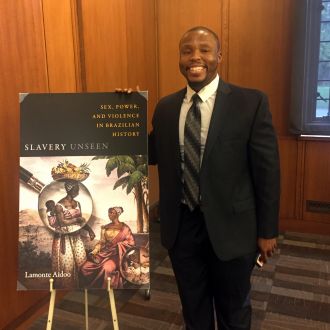