As our world becomes increasingly more mixed-race, how does this trend tell another, more violent story about war, imperialism, and displacement? How can one's body be a site to investigate racial histories and their convergences? And why, if we truly want a less racist and less violent world, are the interdisciplinary humanities vital?

My research seeks to observe the way the past lingers into the present.

I’m a scholar of feminist and queer theory, Asian American studies, and performance studies. I see myself alongside humanities scholars who seek to develop new models to survey the links between dehumanization in the present and the imperial and colonial conditions that got us here.

I’m currently working on two projects. One is in its early stages and it examines how Asian Americans engage in “immoral behaviors” like gambling, sex work, intoxication, envy, and narcissism as a politics of detachment. These detachments show how Asian Americans chart alternative models of living to find closeness, intimacy, and sociality in the wake of violence or exclusion. The project is indebted to my lola and lolo, the best grandparents ever, who found sociality with other immigrants while playing mahjong and gambling at the casino.

The other project stems from my first book and it’s what my tgiFHI talk is about. It revolves around a relationship between racial mixture and what I call “racist intimacies.”

In the United States in particular, the growing numbers of racially-mixed citizens indicates, supposedly, a shift toward a post-racial society. I look explicitly at Asian Americans with white heritage, which is a group that's growing exponentially. Mixed-heritage Asian Americans in the contemporary moment are uniquely heralded as signs of an ideal cosmopolitan future.

In order to celebrate racial mixture, one must forget its genesis in war, occupation, and slavery. This project is an attempt to bring those disavowed histories into the fore by approaching racial mixture as a convergence where multiple racial histories clash within one body. That convergence doesn't just result in an identity of being mixed race, but as I show, it becomes the very grounds for new and emerging racisms.

How did your interests develop over time?

When I was applying to graduate school, I was interested in instances of passing, race, and queer femininity. I felt bombarded with images of racial mixture and queerness as signifiers of progress. I wanted to think about these subject positions outside of the visual, and so I began compiling an archive of different artistic expressions like performances, memoir, and poetic work that depicted moments of feeling mixed and queer.

But then two years into my PhD, a case broke that shifted the entire direction of my work. In 2015, Daniel Holtzclaw, a former cop in Oklahoma City was convicted to serve a 263-year sentence for assaulting at least 13 Black women. Holtzclaw is German and Japanese American. His father was stationed in Japan for the U.S. Air Force where he met his mother, who was working as a civilian police officer. Daniel was born in Guam.

His was indeed a case about sexual violence and police brutality against Black women. But it was also a story about empire, Asian masculinity, and whiteness. Throughout his case, journalists consistently racialized him as white. But he's not white; he’s racially mixed. I began to think about the porousness of whiteness alongside the faulty notion that mixed-race people are exemplars of a better future.

This case helped clarify for me how war, displacement, and migration are not single standing events, but rather function as manifestations of ongoing legacies of militarism and policing, which together reveal the prevailing racist logics behind gendered and sexualized violence.

I was trained in the interdisciplinary field of gender studies, so I've always been a little playful with my methodology. The questions I ask help shape the methods I use to answer them.

Something that remains steady throughout the different methods I engage is my attention to minoritarian aesthetic practices. This includes self portraiture, installation art, queer visual culture, poetics, experimental film, and even revolutionary protest.

I try to think through what it means to trouble the barrier that exists between researchers and their objects. I talk with the people I write about, share my writing with them, and sometimes invite them to speak with my students.

Of course, with people like Holtzclaw, who I am unable to speak with, that form of connection is formed by investigative archival work. There are writings about mixed-race Asian Americans, but not necessarily an archive. A lot of the work I do is about assembling my own archive.

Most of my “archival work”—and I hesitate to call it that—is about listening to the artists I work with, not just what they say or how they say it, but what their bodies or silences communicate. I do a lot of movement analysis of dance and live performance, and think through what it means to participate. I pay close attention to how one’s movements are molded by things like empire and colonialism. Maybe the way one sits is because one was disciplined to sit a certain way, for example.

My understanding of archive is informed by what Julietta Singh calls the “body archive.” The body holds memories of the past that reach beyond one’s own life, deep into previous generations. I’m interested in the mixed-race body because there is a clashing of multiple racial histories. The body becomes the site to understand that.

There’s an assumption that within these fields, you talk about identity and fill in the gaps of history with stories about marginalized people that weren't told. And certainly, that’s what happens here. But more so, I think these fields really help us think about how race, gender, sexuality, class, ability, nationality—all of these identity markers—are actually forms of analyzing the world.

When you focus on a case like the Page Act, you think through a history of racialization and sexualization of Asian women. But if you use this case as a lens—an analytic—it opens up a different story of the world. I want my students to learn that we can put on an analytic and hopefully never take it off. Because when it's on, you can see, in every instance, power working.

Ultimately, I'm less interested in how interdisciplinarity may provide new ways to forge originality or exhibit expertise differently. I’m more interested in how it can invite us to think and learn alongside each other. To me, it's about listening to different fields, groups of scholars, objects. At its best, interdisciplinarity allows for a comprehensive understanding of power so that things like justice and redistribution can become possible.

I hope my talk incites questions that might be uncomfortable but also necessary if we truly want to have a less racist and less violent world.

I'd like people to ask questions about how intimately empire is woven into their lives. I'd like them to wonder how those questions may be answered differently depending on their positionality. Would you be here, if not for U.S. imperialism? Where do your desires come from? How might our desires be shaped by the past? How might we pursue intimacy in ways untethered from empire?

I don't know if it's possible, but I think we have to at least ask the questions. I really value self-reflexivity. How do we look inward and think through the different histories we carry, and understand that these histories intimately affect the ways we treat ourselves and each other?

I'm currently teaching “Race, Gender, and Sexuality.” The first few weeks prompt students to begin developing an analytic. The following weeks invite the students to apply their analytic to a series of case studies.

“Half and Both: On Color and Subject/Object Tactility.” Women & Performance: a journal of feminist theory, Special Issue “Performances of Contingency: Feminist Relationality and Asian American Studies After the Institution.” 2020.

“‘So, I turn inside’: Overcome by the Unbearable, Seeing Myself in Michiyo Fukaya.” Feminist Studies, Special Issue “Commemorating the 40th anniversary of This Bridge Called My Back: Writings By Radical Women of Color and All The Women Are White, All The Blacks Are Men, But Some of Us Are Brave: Black Women's Studies.” Forthcoming, Spring 2022. 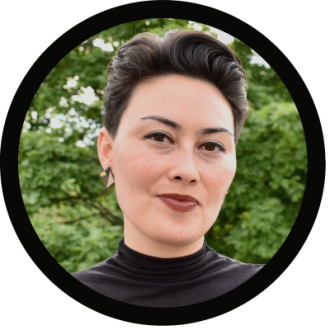