Our Spring 2023 tgiFHI series begins with Cassandra Casias, Assistant Professor of Classical Studies. Here's an interview with Prof. Casias on her research interests, method, and practice.

My research is primarily focused on the social history of the ancient Mediterranean. Topics that I'm most interested in are sex and gender in the ancient world, slavery and religion, primarily early Christianity in the Roman world.

My mother raised me to be two things: a Catholic and a feminist, and in equal degree. I've always been interested in how women are discussed and the way they are depicted in early Christian texts. The way Christian theology eventually develops around family dynamics, the life cycle of women, and how their bodies are regulated, to a certain degree, by bishops.

Tell us about your research methods. Can you discuss a text you’re working with now?

A text I can discuss is the Passion of Perpetua, which is an early Christian narrative about a group of catechumens (pre-baptized Christians) who were executed in a Roman spectacle at Carthage in 203 CE. This account is unique because it includes a portion that reports to be a diary of a woman who is going through the martyrdom while she's in prison waiting for execution. She herself, Perpetua, was a nineteen-year-old girl and a nursing mother. She had an infant at her breast, and she discusses her issues having to breastfeed in jail, like having to bribe the guards so that she could keep the baby in there with her, for example.

This is a text I'm working on right now. The best way to describe my research method is to say that we have interesting texts from antiquity and the problem is trying to explain them, because often only one side of the story has survived. There will usually be just one account of a certain event, and then you have to figure out your way around that. With Passion of Perpetua, my method is to go around and find as many sources as I can that are relevant to this text to provide more context. For example, there is a Christian writing around the same time as Perpetua whose name is Tertullian. He was, as far as we can tell, a priest of the early Christian Church. We don't know too much about him, but his writings help because he was both from Christian Africa and he was writing around the same time as Perpetua. Then as an ancient historian I can also look at tombstones. Tombstones are one of our major sources of information because there was a wide variety of people who had inscriptions about their life, written either by themselves or their families when they were buried. We also have contracts from the desert. Egyptian sands and dryness have preserved a lot of different legal documents that we can use. Even though they're from Egypt, it still helps us understand other areas in Rome where we don't have as much surviving evidence. It's about piecing together several different parts of a puzzle.

Could you say more about the role of interdisciplinarity in your work?

I would say that, not just for me, the study of the ancient world always has to be pretty interdisciplinary simply because we have so few sources to begin with. As I mentioned with Passion of Perpetua, I am looking at it as a historian would evaluate texts. Because we have so little, I have to understand a little bit about Christian theology so I can discuss Tertullian's contribution to the context of Passion. I have to study papyrology, the study of looking at these documents from the desert and trying to decipher handwriting, to figure out what exactly these documents are saying. Then there's also material culture that I look at. For example, I study slavery in Roman Africa, and we have these surviving slave collars–iron collars that they would put around the necks of runaway slaves. We look at these objects and what they can tell us about the history of slavery and the Roman Empire, because we do not have written accounts from slaves. The ability to look at material culture, images, representations, philosophy, theology in my personal way helps us at least flesh out the text that we have. And then, of course, there's things like ancient medicine or ancient law. There are certain areas of expertise that I kind of delve into when historically contextualizing certain things.

Could you speak more about the presentation you’ll give for tgiFHI? What takeaways do you want people to leave with?

The scope of my talk will be to discuss breastfeeding in the Roman Empire: the difference between the philosophical texts that tell us what women should be doing versus what women were actually doing. Now in the Roman philosophical texts, the elite men who were writing them would say that A.) The mother breastfeeding is the best option for the baby, and B.) would criticize women for outsourcing wet nursing to enslaved people. This of course was not their objection to the exploitation of slaves, but it was criticism that you were charging something as important as a free child to a woman who is slavish, who is implied to be a barbarian and not morally upright. The idea was that we should be raising children alongside their free mother so that they become morally upright.

That's a discussion that's going on in the scholarship. What I'm doing is taking these Christian sources from Africa because they are unique and can tell us something about breastfeeding in the Roman Empire more generally, especially the text Passion of Perpetua. Because it's an account written purportedly by a nursing mother who talks about her experiences with nursing, it highlights the complexity of questions about when the mother should nurse or when the slave should nurse, and why certain decisions are made about how to feed an infant

Recently there was a formula shortage in the United States, and it generated a lot of discussion about breastfeeding. The basic idea was that women should be breastfeeding anyway, and therefore the shortage should not affect them. In that rhetoric, the issue was made to be much more black-and-white than it is. Women could nurse, theoretically, which is medically good for the baby, but at the same time it does not consider the reality of the situation. For example, there are medical reasons why a woman might not be able to nurse, or socioeconomic reasons why a woman may not be able to nurse. That's basically the kind of situation I want to show in ancient Rome, as well. The philosophers would make it a black-and-white choice between a mother really loving her children and being devoted and therefore nursing, or not. If a woman outsourced her child to a slave she was seen as vain, concerned about her appearance, and uncaring towards her babies. What you see in both the modern and ancient world really is a much more complicated situation. Because an infant's life is so fragile it's good to have more than one option for milk. For example, a mother might not produce enough milk, or a nursing mother might die. Because infant mortality was such a big issue, it really comes down to the fact that most decisions about child rearing are going to be a lot more complicated than the philosophical texts make them sound.

This semester, I am teaching “Roman law.” One of the great parts about Roman law is that you get to teach social history as well. Some of the biggest topics are marriage law, inheritance laws, and slavery laws. You know, laws about personal status and finances, which are interesting to talk about.

Next semester, I'm looking forward to teaching a class on ancient medicine. It's called “Ancient Sex Ed” and addresses ancient medicine geared specifically towards sexual reproduction and sexual health, the different medical questions they had, and the way that the ancients tried to solve them. We deal with topics like how the ancients thought conception happened, or breastfeeding—because of my research, of course—and we go over men's sexual health and their thoughts about how men can most successfully impregnate a woman, or whether he's unable to have sex, and what you should do in that case. That's what I’m looking forward to teaching next semester.

I'm also teaching a graduate seminar on Augustine. Augustine of Hippo is a bishop from Africa. More than a million surviving words come from Augustine. He's written sermons, letters, treaties, and several different genres. We're going to explore a little bit of his writing and what he talks about. 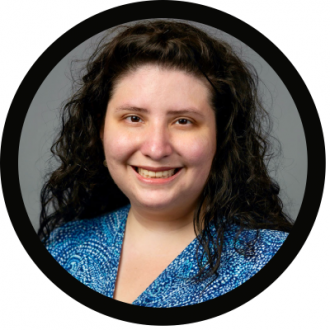