In a legal context, such as the war crimes tribunal held to address the Armenian genocide, why must we analyze culture? Why is a literary analysis vital to approaching issues of conflict that that are legal, political, and historical? And what kind of value do archives that are incomplete and fragmentary offer to scholarship?

This week, we interview Erdağ Göknar, Associate Professor of Turkish in the Department of Asian and Middle Eastern Studies.

Dr. Göknar gave a talk entitled "Legal and Affective Archives of Atrocity: The Afterlives of Genocide Trials in Occupied Istanbul (1918-23)" on Friday, March 4, 2022, as part of our tgiFHI series.

END_OF_DOCUMENT_TOKEN_TO_BE_REPLACED 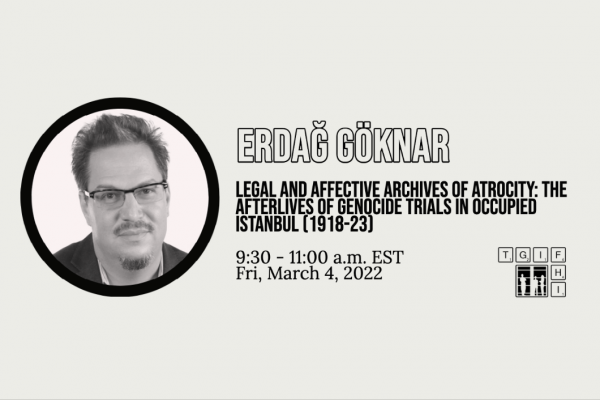 Broadly, my research interests focus on identity and subjectivity as represented in cultural forms such as literature and historiography.

I’m the child of Turkish immigrants and I grew up in the American Midwest, where I encountered a lot of misconceptions about what it means to be from the Middle East, and specifically Turkey.

This became something of a dilemma growing up. And so I began exploring the dilemma, first through a creative writing, in which I hold an MFA, and later academically through graduate work in late Ottoman and modern Turkish studies.

There are points at which both of those trajectories intersect in my work. For example, through literary translation. Translation always occurs in a broader cultural and historical context, and the translation process can't happen fully without the scholarly research.

Such that I consider the scholarship I do to be a form of cultural translation. I'm trying to explain cultural contexts that people may have heard about, but are unfamiliar with, as well as the underlying structures that inform those contexts. I see my role as a scholar to translate these lesser known worldviews to new audiences.

How did you arrive at the current project?

For many years I’ve been focused on the period between 1918 to 1923 in the Middle East, which was an armistice period after World War I, when Istanbul and other territories were occupied by Allied powers, essentially the British and the French. It's a formative era when the modern Middle East, as we know it today, was established.

Late Ottoman Istanbul was a very cosmopolitan and dynamic city. There was a lot of fluidity at that time with how people saw themselves and the multiple ways inhabitants felt a sense of belonging.

But by World War II, Istanbul had changed considerably. It had lost much of its cosmopolitan character and had became more monolithically Turkish and Sunni Muslim. The Christian population was either forced out or encouraged to leave.

So, the complexities of this five-year period are fascinating to me. And in the midst of this occupation, you have a war crimes tribunal unfolding against the former World War I Ottoman government for persecution of the Armenian population—which fed historiographies of both genocide and denial. Most scholars today would treat the Allied occupation and the Ottoman tribunal separately. But in my current project, I’m trying to connect them by looking at intersections of law, historiography, and literature. I’m examining two events that were going on at the same time in the same city, but were not always considered together in assessing the Armenian genocide.

I'm engaged in tracing the ways cultural production—this can mean a novel or a legal document from an archive—is indexed to political and historical issues. This often takes the form of tracing what might be called “epistemic violence.” This is not material violence, but violence to a system of knowledge or a worldview.

My research is done in layers, through modes of “reading.” The kinds of readings I do are inherently interdisciplinary. I first do a literary close reading of the text in question. And then I start to trace the political and historical contexts to which the text refers. Is there an issue of race or law involved here? Does the text say anything about identity formation, subjectivity, or state power?

In doing these readings, I have to engage in interdisciplinary methodologies. I tell my students that if we're given a book, we may think of the text as contained within the cover. But you can actually read the ways in which the book connects not only to other texts, but also to other contexts, giving rise to a network or an “intertext” of sorts. That’s the kind of scholarly reading I do: from texts to contexts and intertexts.

I try to convey the broader resonance and significance of cultural production. We live in a time when the humanities and culture are often marginalized. They’re considered to be ancillary to politics. I try to invert that understanding. Culture can inform political violence and can, in fact, reveal the clues to its instigation.

On the relationship between epistemic and material violence:

I spend a lot of time in my courses discussing the ways in which epistemic issues, which are issues of knowledge formation, are tied to ontological concerns—that is, behavior. That connection becomes really interesting when you look at issues of conflict between groups, ethnicities, and peoples.

For example, in many countries throughout the Middle East, and specifically in Turkey a language and alphabet reform took place in the late 1920s, whereby the Ottoman Arabic script was, in a matter of months, changed to the Latin script. Immediately, newspapers were written in another alphabet. It became illegal to publish anything not in the Latin script.

This created a rupture between one linguistic system and another. I see this as an extremely violent process, yet it was presented as a benign process for the greater good, and with a rationale based on a linguistic argument: it’s easier to teach in Latin. This rationale conceals a completely different, ideological social engineering that was happening in the name of nationalism.

The war crimes tribunal held in occupied Istanbul after World War I to address the genocide and atrocities inflicted upon the Armenian population in the Ottoman Empire, left us with fragmentary archives—which are also in Ottoman Turkish. And so, a few years later, when the state changed the alphabet, this was an epistemic move, which concealed political violence in the name of progress.

On approaching the archive through a “literary mode of knowing”:

The Armenian genocide was enacted through population transfers and massacres by the Ottoman government. The archive associated with the Istanbul tribunals establishes an early evidentiary source for this war crime. The documents that constitute it are fragmentary, raising subsequent issues of law and historiography with regard to crimes against humanity.

But these documents and fragments are a fascinating source of interdisciplinary analysis. Some legal scholars might look at archival documents and think about their probative value: what does this tell us as a fact? But the documents can be read in other ways, ways that reveal a cultural or political imaginary. I read the archives as a textual corpus, through what scholars might call a “literary mode of knowing.”

For example, there are documents of interrogatories—questions that prosecutors asked suspects during this period—however, they’re incomplete. They don’t include the answers, for example, just the questions.

But the questions themselves are extremely revelatory. In a legal framework, they would be dismissed for lack of probative value. But in an interdisciplinary, cultural analysis, they indicate a genocidal landscape within state and society that exists outside the evidentiary rules of the courtroom.

The literary reading enables us to revalue the archive affectively in a way that gives it testimonial force that it's stripped of otherwise. Today, the Turkish government might acknowledge Armenian deportations and massacres, but refuses to acknowledge the intent to harm or kill Armenians as genocide. An intertextual and “affective reading” of these documents makes it impossible to deny that intent.

This is an incredibly violent and tragic period in Middle Eastern history. But it’s also somewhat marginalized. We predominantly think about the region as an area studies region or through the lens of individual nation-states, which filters out this formative moment of the end of empire. But this period of reterritorialization is the prequel to the modern Middle East as we know it.

The other thing I would like people to take away are the revelations of alternative archival readings. Tracing the way a legal or historical document can be embedded in various contested discourses is fascinating. Through an affective reading, we can trace analyze those discourses and think about how the document is appropriated by various political or social imaginaries, by various sites of state power.

Hopefully, this work will encourage others who may know of other lesser known or marginalized archives that may be worth reexamining and refiguring. I hope to encourage others to retrieve archival stories in innovative and politically engaging ways.

I direct a study abroad program called “The Middle East and Europe.” We had to stop taking students to Turkey after the failed coup in 2016, so we now have a four-week program in Berlin. But I’m very excited because for the first time this coming summer, we’ll be going to Istanbul for the culminating week.

As part of this program, I teach a course that deals with the historical and fraught relationship between Turkey and Germany, going back into the late 19th century. We tap into that history, as well as more contemporary issues of diaspora, Gasterbeiter or guest workers, and state minority relations.

At Duke, I currently teach a few courses on a regular basis. One is called “Geopolitics and Culture.” The subtitle changes, but it's been “From Bosnia to Afghanistan” for a while. We look at geopolitical conflicts throughout the Middle East using cultural texts as points of entry.

I also teach “Istanbul: City of Two Continents,” which examines at the last 150 years of the city and issues of contested cosmopolitanism.

Göknar, E. (2019, May 19). The Light of the Bosphorus: Orhan Pamuk’s Photography in “Balkon.” Los Angeles Review of Books. Retrieved from https://lareviewofbooks.org/article/the-light-of-the-bosphorus-orhan-pam.... 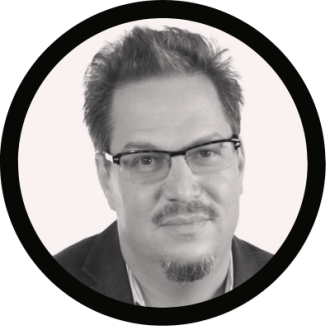