What do we mean when we use the word "trauma"? Did the ancient Greeks think of trauma in the same way? Why do we assume that Greek tragedy is somehow therapeutic, and how might the story be more complicated that that?

Here we interview Andrew W. Mellon Assistant Professor of Classical Studies and Theater Studies Erika Weiberg about her research and teaching. Dr. Weiberg gave a talk entitled "On Knowing and Not Knowing Trauma in Ancient Greek" in our tgiFHI series on Friday, November 12, 2021:

I’m interested in the concept of trauma in antiquity, and how its legacy affects the ways we think about trauma today. I look at Greek tragedy, which is the way the Greeks represented trauma most directly, through dramatic art. I’m also interested in how gender is articulated in ancient Greek literature.

I got interested in the topic through some theater groups that have recently begun addressing combat trauma through the performance of Greek tragedy. There’s Brian Dorries’ company [Theater of War]. There’s another one run by a director named Peter Meineck [Aquila Theatre]. Strangely, around the same time in 2009, both of them started putting on these performances of Greek tragedy for veteran audiences. They thought that Greek tragedy could be used to articulate some of the pain that veterans feel after war, by approaching it not through their direct experience, but through an art form, filtered through a distant past and through these heroic figures.

When I learned about these performances, I was intrigued, and also a little disturbed, because my own research in Greek literature had been about gender, and all of the ways in which ancient texts silence the voices of women and people who don't conform to the default male position. So I was interested in how these projects go from texts that are reflections of their culture, which was a highly patriarchal, misogynistic culture, towards addressing these issues for us today, in a way that's inclusive rather than exclusive.

That led into a project where I was thinking about how tragedy itself is interested in women's experiences of pain. But tragedy represents women’s pain differently from men's pain. The representation of women's pain is often more complicated. You would not want to make this kind of universalist argument that “their pain is our pain,” which allows us to talk about it in a therapeutic way. Because for women, these works of art are not necessarily therapeutic.

That was my entry point. I wanted to think about the representation of trauma in these ancient texts, and how they let us understand trauma and gender differently. How does looking at women’s pain in tragedy complicate theater projects that want to use Greek tragedy as therapy for modern audiences? Is there a way that we could use these texts to address issues related to women's experiences of trauma, or is that a project that should not even be attempted using Greek tragedy?

“Trauma” is a popular word nowadays. What do you mean by it?

I'm interested in trauma not as a bodily or physical wound, but as an emotional or psychological wound—although I think that is a false binary today, and was especially so for the Greeks. Trauma researchers today define trauma as an event that has lasting repercussions on the mind, and as being affected by that event after the fact. So it’s both the event and the aftershock.

In my research I was interested in asking, “Did the Greeks have this concept of psychological trauma?” The word “trauma” is a Greek word. But it’s not ever used in the sense of psychological wound in Greek texts. I don't think that means that they didn't have a concept of it, but I think it does mean that there are serious challenges for us when we try to understand what that concept might have been.

Can you describe what your research practice looks like?

One of the things that I do to figure out how the Greeks understood trauma is to look at all of these different words related to the idea of trauma across a large number of different texts. Those texts might be Greek tragedy, ancient medical texts, historiography, and philosophy.

The nice thing about working on ancient texts is that now they're all digitized. So we have these wonderful databases. I search in Greek for all of these different words and passages, then compare them, and think about them in context based on what I know from reading other sources, and from thinking about how they are talked about in this genre versus that one.

Have you found anything in these searches that surprised you?

One of the interesting things that I found was that a lot of female characters in tragedy talk about their emotional pain using the embodied language of childbirth. They use this one word in particular, odis, which means a birth pain or the pain of being in labor. Using that word to describe an emotional experience struck me as pretty novel. There's also a Greek word ponos, which means pain, but is often used both of heroic struggle and of the pain of childbirth. I don't know if I was expecting to find these kinds of overlapping terms, both in the way that they’re gendered, and in the way that they express both physical and emotional pain.

If you had to pick a Greek tragedy that would provide the most insight into trauma or women's experiences of trauma, which one(s) would you pick, and why?

My favorite Greek tragedy is one that most people have not read. It's called Women of Trachis by Sophocles. It’s like Oedipus, which is the play most people think of when they think of Greek tragedy, in that it's also about the belated recognition of a mistake that the protagonist made. Oedipus becomes a key text for how people understand trauma today, because of Freud’s idea of belatedness: that trauma is something that we can't recognize in the moment, that it occurs only later, after the fact.

But whereas Oedipus is really well known, this other play is not. It has a female protagonist named Deianira, who is the wife of Heracles. She talks quite a lot about her past experiences as a girl, and how those past experiences create a situation of perpetual and cyclical fear in the present for her. She talks about how the river god Achelous asks for her hand in marriage, and she's so terrified of him that she'd rather die. She ends up not having to marry him, because Heracles battles him and marries her instead. Then that marriage ends up being an incredibly difficult one, because he's constantly going away and leaving her alone at home, to raise their kids. She's no longer in her father's house, which she associates with this feeling of protection. This creates a kind of chronic pain, related to these gendered expectations for women and girls in the ancient world, which leads to the real tragedy that's being depicted on stage, which is that she sends what she thinks is a love charm to her husband, and it ends up killing him. So there's a lot going on there about how past experiences and gender socialization can create traumatic moments that are only recognized belatedly.

What's one thing that you hope people take away from your talk?

What some people think of as a straightforward medical diagnosis like post-traumatic stress disorder is, in fact, something we construct through different discourses, be it law, medicine, culture, or art. And the way we construct it today is different from how other cultures do, especially ancient cultures. You're dealing with a cultural difference as well as a huge gap in time.

I want to reawaken how strange and different and unique and interesting the way the Greeks thought about trauma is, versus how we do today–to really emphasize the particularity of it rather than assume a kind of universal narrative. It is not apolitical the way we read these ancient texts either.

There is a reason why they keep coming back and haunting us: they’ve been intertwined in different moments in our history. I want to be aware of and critical of how our own ideas have been shaped by these texts.

Right now, I'm teaching beginning ancient Greek. I’ll do that also in the spring, continuing on from this semester. I think teaching beginning languages is wonderful because we play and we do a lot of games. Learning an ancient language like Greek and Latin is different from learning a modern language, where you first learn how to go to the store and order at restaurants. At this point in the semester, my students know, like, 10 words for “killing” and “destroying.”

In the spring, I’m also teaching a capstone seminar for classical studies majors about stories of homecoming in Greek myths, like the journey home that we're familiar with from the Odyssey, and how postcolonial and feminist writers have reimagined that story at different moments in history.

“False Reports and Waiting Wives on the Home Front in Aeschylus’ Agamemnon and Sophocles’ Trachiniae.” Forthcoming in 2022. Classical Philology 117 (2).

“Weapons as Friends and Foes in Sophocles’ Ajax and Euripides’ Heracles.” 2018. In The Materialities of Greek Tragedy, edited by Melissa Mueller and Mario Telò. London: Bloomsbury, 63-77. 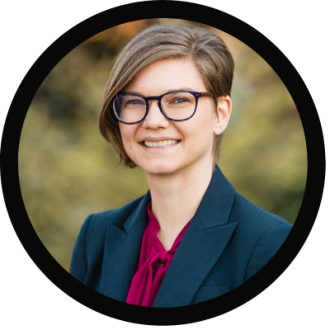