Dr. Jasmine Nichole Cobb is the Bacca Foundation Associate Professor of African & African American Studies and of Art, Art History and Visual Studies. She is also a co-director of the “From Slavery to Freedom” (FS2F) Humanities Lab at the Franklin Humanities Institute at Duke University.

In this edited and condensed interview, Dr. Cobb describes the enduring questions of what Black freedom means across time and visual media, the history of violence relating to Afro-textured hair and racial capitalism, and the weirdest (and grossest) thing she found in the archives.

Dr. Cobb gave a virtual tgiFHI talk titled Tactility and the Texture of Racial Capitalism on Friday, September 25, 2020, at 9:30am. View the full talk here!

On her research interests and how they developed:

Broadly, I'm interested in representations of Black liberation, Black freedom, Black autonomy, particularly as they represent visual problems from the 19th to the 21st century.

I became interested in this area through archival research, after discovering there were communities of free African Americans in the U.S. before the Civil War. I approach the existence of a free Black person in the early 19th century as a visual problem. At a time when slavery is rampant and “black skin color” is supposed to be a marker of social standing, how do people make sense of the fact that racial identity did not clearly convey citizen status? How did people cope with the notion that be of African descent did not always translate to this person being owned on paper?

I started researching routes toward freedom and trying to understand how some Black people became free while slavery expanded. How did this reality shape their lives? How did that shape their representation by others? How did they represent themselves?

I took those questions to archives, many of which, ironically, were founded in the context of slavery. I would find, in the 19th century, hostile representations of free African Americans as absurd, not prepared for citizenship, not making good use of their freedom. And it started me on this path of trying to understand what Black freedom has meant to people of African descent in the U.S. across time periods and across mediums: painting, caricature, drawing, photography, film, and so on.

How does your work combine perspectives from different disciplines?

I am appointed in Art, Art History & Visual Studies and African & African American Studies, but I also have work conversant with questions in English literature, including a forthcoming edited volume on African American literature in the early 19th century. I'm trained in rhetoric and communication, which is a young discipline that straddles these fields of visual representation, writing, speaking, and the like.

I discuss an image of Frederick Douglass in my second book, a daguerreotype taken by Samuel Miller. By the time Frederick Douglass takes this picture, he's a well-known abolitionist, he's respected, he's run away from bondage in Maryland. But his freedom, as recorded in the picture, is complicated; Douglass gains his freedom through white abolitionists paying for his manumission, thus replicating his commodity status in some ways.

It raises the question of what kind of freedom do we recognize for Black people? And what kind of freedom can be portrayed through particular visual media, like photography, in the middle of the 19th century? What are the ways in which race undermines representation in real time, and in documents?

On her use of archives — and the strangest thing she found there:

For this project, I spent a lot of time looking through 19th century archival material such as the photographs of Frederick Douglass, as well as records—pseudoscientific records about hair and race.

One strange find is this scrapbook collection by a would-be scientist, Peter Browne of Philadelphia. He was interested in hair as it related to race science, which is already solid intellectual business by the early 19th century. Although Peter is not a scientist by training, he tries to enter the foray by proposing that the distinction in hair texture between people of African descent, whites, and Native Americans is proof that people of African descent come from different origins, and that they are more akin to animals than to people.

Along with his “scientific” writing and experiments, he creates a scrapbook where he collects samples of hair from presidents. He has hair from George Washington and Andrew Jackson, as well as hair collected from unfree people of African descent and Native Americans.

That was interesting – and gross – for multiple reasons, but for me, as a person who loves archives, it’s exciting, because there is no other place to find something so weird. It gives another tangible example of how proving the variety of races was really a way to become an upstart intellectual in the early 19th century.

There’s so much we think we know about “Black hair,” which, in this book, I define as textured hair—hair that's not treated with chemicals or heated to become straight. A common theme, particularly in African American studies, has to do with questions of entrepreneurship and personal style, which are important. But I come at this work asking: What are the other tentacles of capitalism we should think about when we think about Afro-textured hair?

I'm talking about violence as the chief imprint capitalism makes on how we understand Black hair. There are some spectacular examples that have come up in recent history, from children suspended or not allowed to graduate for wearing dreadlocks, to a high school athlete in New Jersey having his locs forcibly cut off at a wrestling match.

In the talk, I share how there's a much longer history to these spectacularly violent encounters. Read closely, they tell us something not just about the meaning and import of Afro-textured hair, but also about legacies of touch and intimate interaction, intraracially and interracially. I hope the talk helps us to think more broadly about racial capitalism, touch, and hair texture.

On the courses she’s teaching:

This semester I am teaching “Black Women, Black Freedom.” It's a little different every time I teach it, but essentially, it’s new works often authored by Black women scholars. That’s who happens to be most frequently writing about Black women—other Black women.

My next class will probably be “Women and Visual Media Studies,” which is a course on contemporary representations of women and digital platforms, popular feminism, how women navigate art and media production, misogyny, and feminism. 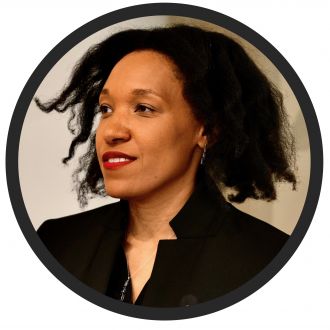