Dr. Jesús Ruiz is a historian of the Haitian Revolution, the Caribbean, Black Atlantic, and Afro-Latin America. He is currently an ACLS Emerging Voices Fellow at the Franklin Humanities Institute, History, and Art, Art History & Visual Studies at Duke University, and will work with Digital Humanities Initiative@FHI Director Victoria Szabo on a new, archives-focused undergraduate course, “Introduction to Digital Humanities" (Spring 2021), among other projects.

"We are excited to have Jesús working with us to develop our approach to critical digital humanities," wrote Victoria Szabo. "The ACLS Emerging Voices fellowship allows us to opportunity to combine that research focus with a deeper dive into how we conceive of a more critical, global, engaged and reflective DH. As a scholar focused on the Haitian revolution from a Spanish and West African perspective, Jesús joins a strong community working on Haitian history and culture here at Duke."

In this edited and condensed interview, Dr. Ruiz describes his journey through the Spanish archives, why he takes a transimperial lens to research the history of Haiti, and why the Haitian Revolution is the most important revolution in the history of the Western Hemisphere.

Dr. Ruiz gave a virtual tgiFHI talk titled 'I Burn My Nation': Black Royalists and Monarchical Thought in the Haitian Revolution on Friday, October 16, 2020, at 9:30am. View the full talk here!

On his research interests and how they developed:

I come from an interdisciplinary background of Spanish language and literature and Caribbean cultural studies, of reading a lot of Caribbean postcolonial writers like Césaire, Fanon, and Glissant. My early interests were in the Zapatista Revolution in Mexico and the Sandinista Revolution in Nicaragua. Then as a master’s student, I realized that the Haitian Revolution was the original example of a successful revolution in the Americas. And so that's where my research began: looking at Haiti.

I took a trip to Seville, Spain and did some work at the General Archive of the Indies. I began looking at records on the Spanish reaction to the slave revolts of 1791 in Haiti. That’s when I started to realize there was something much deeper than a simple story about a black and white struggle. There was actually much more fluidity. There was contact, negotiation, and influence between the formerly enslaved insurgents, the Spanish agents, the Spanish military commanders, and other figures.

I decided to go forward with a PhD in Latin American Studies to look at the history of the Haitian revolution. My research has become a broader history of royalism—the support for a monarchical ruler—as a political ethos in the history of Haiti.

We’re given very neat stories of how the nation-state is created, such as with the French and American revolutions. By looking at the Haitian Revolution through a different lens, as a Latin American and Caribbean story, we begin to see a very different political history. We see that there were ways in which enslaved insurgents and the founders of Haiti were negotiating and utilizing these old royalist principles that in our modern political sensibility seem ridiculous.

How does your interdisciplinary training inform your research?

My interdisciplinary background is central to who I am as a scholar. I've trained through a range of methods: historical research, literary analysis, and anthropological and ethnographic research.

Interestingly enough, it wasn’t until my PhD program that I really started to become what I consider myself to be now—a historian. While becoming rooted in the history discipline has pulled me away from a lot of those interdisciplinary methods, my interdisciplinary training, as one of my committee members observed, clearly seeps into my dissertation in many ways, and in ways I didn't immediately realize.

My dissertation is transimperial. Old school historians have drawn hard imperial lines like with the French Empire, the Spanish Empire, and the British Empire. In my dissertation, I’m saying that Haiti is on an island that was both Spanish and French, and if we zoom in on the border, we can see that the history of Haiti wasn't as rigid as the nation-state would have us believe.

For me, looking at history through a more entangled lens has been critical to understanding with greater depth what was happening in Haiti during this revolutionary era. I’ve had to look at some hard questions. What does it mean if a formerly enslaved free Black insurgent was negotiating with a slave-owning conservative royalist and plotting to uphold the throne of the very system that had put him in chains in the first place? How does that disrupt histories of slave resistance and agency in the Americas?

I had to come to this project from a different perspective—an interdisciplinary perspective. I didn't come to it thinking in very neat teleological narratives of what we want Haiti to be.

What have you found in your archival research?

As part of my master’s program, I went to the Spanish archives as a methodological exercise. We were taught the fundamentals of paleography, like how to tell the difference between a “J” and a “Y” and a “G.” But we were really just given a lot of freedom. Since I was interested in Haiti, I started with a collection in the Spanish colony on the court in Santo Domingo.

I started looking at some diplomatic records, which then branched off into military correspondences—reports from Spanish spies at the border sent back to the governor of Santo Domingo. I also started looking at the diplomatic correspondence between Spain and France, and then the U.S. A combination of many different types of records make up my work, and they really start at the colonial border.

One of my favorite stories from the archives is when I learned about an insurgent leader who gave a huge speech at a plaza in one of the towns. He chastised the white colonists and the mulattos, or the people of mixed race. He told them that the revolution was happening and has a list of towns they’ve already taken over. At the end, he says something to the effect of, “If I catch any one of you, I'm going to skin you alive and I'm going to make a mask out of your face and wear it.”

If you can imagine, this was a microfilm record I was flipping through, and I gasped out loud in the archive. The Spanish archives are really strict, so the security guards sprang into action when they saw me jump out of my chair.

Haiti not only was the first country that emancipated slaves, but also it did so despite the challenges that the state and its political leaders posed. Haiti was a Black revolution that instituted a Black state in a world that was dominated by white slaveholding colonies and empires. What they did was totally different than what was happening in the rest of the world. We have to give the Haitian Revolution the complexity it deserves, and learn those complexities, if we want to talk about emancipation and liberation.

What are you teaching next semester?

I’ll also be teaching “Intro to Digital Humanities” with Victoria Szabo and that's part of the Art, Art History, & Visual Studies program. I'm looking forward to bringing some of my research skills and interests to that class, but also to learning along with the students as I'm fairly new to the field of digital humanities in general.

I'm currently working on a book review of Freedom Roots: Histories from the Caribbean by Laurent Dubois and Richard Lee Turits for the journal Bulletin of Latin America Research. This is forthcoming in 2021.

I am also working on two article manuscripts, one based on my tgiFHI talk: "'I Burn My Nation': Black Royalists and Monarchical Thought in the Haitian Revolution," and another based on a talk I recently did at Vanderbilt University's Circum-Atlantic Studies Seminar, "Sons of the Same Human Species: Rayanos and the Entwined Borderlands of Hispaniola During the Haitian Revolution." 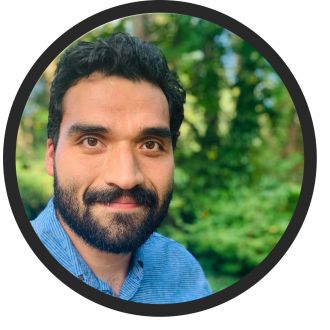