Dr. Jessica Namakkal is Assistant Professor of the Practice in International Comparative Studies; Gender, Sexuality, and Feminist Studies; and History. In this edited and condensed interview, she describes the importance of geography and decolonial feminist theory to her methodology, how she researches migration and the transnational through "minor history," and why utopia is a good idea but a colonial impulse.

Dr. Namakkal's forthcoming book, Unsettling Utopia: The Making and Unmaking of French India, will be out with Columbia University Press in Spring 2021. Dr. Namakkal received a an FHI Faculty Book Manuscript Workshop Award in the 2016–2017 academic year for this book.

On her research interests and how they developed

I’m a historian and I teach in the International Comparative Studies Program. I went into graduate school working on empire, broadly, with the intent to study the ways of knowing produced by colonialism. In graduate school I focused on the French colonies in India, partly because I was training with a French historian, Patricia Lorcin, who works on Algeria and North Africa, and partly because I was really interested in thinking about the parts of colonialism that have not been focused on in the historiography or in popular culture—because colonies have margins. The French colonies were spread throughout India and by the time I got around to writing my book, that brought me to thinking about history that exists on the margins of both empires and histories of empires.

In my book, I build on the idea of “minor history,” and what it means to do history from the margins of the discipline. I see myself as an interdisciplinary scholar: I work with geography, ethnography, and feminist methodologies, in addition to doing more traditional archival research. Minor history is about what it means to do that, and what it means to be a non-traditional bodied historian. Historians come in lots of shapes and forms and ethnicities these days, but it's still a discipline dominated by white men, so the minor is important to my work on multiple levels.

Minor history is also what it means to do history of places that people don't talk about very much. The majority of academic history still is written about Western Europe and the United States and if you look at hiring practices, at least in the US, most jobs are in American history. Minor history really matters in the case of the places that I'm looking at, because the majority of what’s written about India fits into the Anglophone British Empire history. Contributing to historiography in that way, to think about what it means to us to think and with the minor, is what I'm working on now.

On the interdisciplinary nature of her minor history work

The French Indian colonies were spread throughout the subcontinent—they’re not near each other. This geography is incredibly important. In my book I write about the borders that were erected around these colonies, about how colonial interests, here between the French and the British , created physical borders that split villages in half. The Bangladesh-India border has a lot of enclaves today. And these fractured territories are really prominent globally. They came about because of imperial border-making, but people don't really talk about them in this way, instead seeing them as a problem of modern nation-states.

The minor is, in my mind, really expansive. Within history, people are, for very good reason, dedicated to learning a place and its languages very well. But sometimes that also leaves out hundreds of thousands of years of transnational migration. Migration has been a hot topic for the last several decades, especially in the U.S. because of American exceptionalism and the changing natures of U.S. borders. But migration has always happened. And colonial settlement has happened for a very long time. To focus on the national level often leaves out people that move across borders and the importance of border towns, which also tend to be in flux.

The work I'm moving towards is about communes and cults and settlements—intentional communities. My first book has a chapter on a place called Auroville, which is just outside Pondicherry. They're an intentional community that still exists today. Most of the scholarship on these projects happens in Religious Studies and is focused on interrogating the spiritual practices and beliefs of the inhabitants. However, I'm really interested in the material world: in this case, not just what utopianists might have believed, but what happened when they work to make their dreams a reality. The utopianists have really great ideas: Thomas Moore's Utopia was an idea of a place that is nowhere. My argument is basically that this is a colonial impulse. As these utopian practices were put into more experimental communities in the 18th and 19th centuries, they started to take a shape that saw themselves outside of colonial projects, but were incredibly similar and linked to the colonial projects.

Geography, decolonial theory, and postcolonial studies all help me think about the creation of these places as outside of wherever people are trying to escape—whatever institution, whatever hierarchy, whether it be religious, whether it be nationalist, whether it's capitalism. People want to experiment with another kind of living that's outside of the norm, which has often meant migrating and  creating a new settlement. Thinking through geography and theorists who have thought about how space operates is incredibly important to understanding these historical changes. Space is central to those questions.

My argument is that decolonization is a historic event that has not ended, which leads me into the two other ways that I think about decolonization: as a theoretical category of analysis and as a contemporary social movement. Those things are interrelated, but tend to stay separate from each other in the different disciplinary literatures about decolonization.

What I am working towards, and what my book and my next project work towards, is understanding the continuations of colonialism. We should all acknowledge from the start that we live in a settler colony: the U.S. is a settler state and all non-Indigenous peoples are complicit in it. But beyond that, states that were former colonies also need to think about settler colonialism. India was not a settler colony in terms of British rule, but contemporary India needs to think about its colonial institutions. The most obvious one may be the legal system, which is basically the British legal system and legal colonial code, but also the way that space is occupied, with military and police, in India today, the most obvious and urgent example being Kashmir.

I also urge people to think about what it means to think about decolonization as a completed event, which I think historians have been complicit in making a norm. I'm trying to make that not the norm. It's very popular now to talk about decolonizing things. I think there are social movements that are doing that now in smart ways and social movements that are doing that in vacant ways that are not engaged with questions of colonial settlement. But we need to think about them and we need to talk about what it has meant and what it may mean going forward to decolonize.

What courses are you teaching?

This semester, I'm teaching a new course called “Global Histories of Citizenship, Migration, and Empire.” It’s part of the Focus Program on “Immigration and Citizenship,” an effort put forward by the burgeoning Asian American and Diaspora Studies program. We’re thinking about how the history of modern migration is linked to empire and where contemporary ideas of citizenship have come from. Who is a citizen, who is a migrant, who is a refugee, who is a tourist?

And I have another new course called “Global South Asia” that I will also be teaching next semester. It’s a South Asian diaspora class that lays an intersection between Asian American studies and then goes back to also thinking about what the global-ness of being South Asian means back in South Asia. To be a global population instead of being designated within certain nation-states. To be part of the world.

“Who is a Citizen in Contemporary India?” with Swati Chawla, Lydia Davis, and Kalyani Ramnath, Epicenter, Weatherhead Center for International Affairs, February 11, 2020. 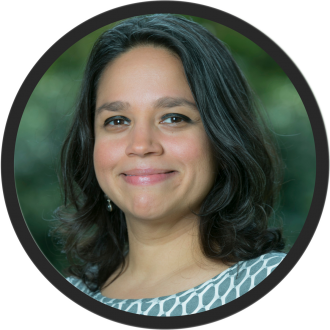