Our Fall 2022 tgiFHI series continues with Kimberly K. Lamm, Associate Professor of Gender, Sexuality, and Feminist Studies. Here's an interview with Prof. Lamm on her research interests, methods, and practice.

Can you tell us about your research interests and how they developed for you?

My research is focused on psychoanalytic feminism, the iteration of feminism that takes up the insights of psychoanalysis, and brings it to bear on US literature, art, and visual culture. I think a lot about the affinities between aesthetic practices and psychoanalysis, both as a kind of method for reading texts, but also as a one-on-one experience in the clinic. For me, both aesthetic practices and psychoanalysis encourage us to see, understand, and value people in their singularity, or how their subjectivities are unpredictable arrangements of desires and histories. And I think that that is enormously valuable, because I don't see much out there in the world that is attentive to the singularity of people. In Black studies, which is an important part of my research, there is a concept of the Black interior developed by Christopher Freeburg in his book, Black Aesthetics and the Interior Life (2017) that resonates with my interest in psychoanalysis. Freeburg writes that “the fact that Black people suffer from racist social hierarchy is general, but precisely how one struggles, contests, and falls victim to the suffering is inherently unique.” To me, this is very much aligned with the insights of psychoanalysis. A concept like the Black interior doesn't account for the histories of systemic racism, but I feel like it is a necessary supplement to those kinds of investigations.

I was initially trained to read modern and contemporary poetry in the US, and it taught me how to read carefully and expansively and take the imagination seriously. My study of Black literature is an important part of cultivating that attention and understanding its political stakes. The work of poets such as Gwendolyn Brooks and Harryette Mullen underscore how significant a concept like the Black interior can be.

Tell us about your research methods and describe what your day-to-day research practice looks like. What’s a particular text or a writer that you're working on right now or thinking through?

My research methods are really informed by psychoanalytic insights about the unconscious and the idea of “working through,” the name for a process of revisiting, through words and affects, memories and experiences that one holds in the unconscious. I consistently choose, read, and investigate texts that illuminate the fact that when we talk about identity categories such as gender, sexuality and race, often we aren't fully present to ourselves, particularly if we have inherited damaging histories. I'm also interested in texts and objects that attest to the limitations and dismissals built into the concepts of women, femininity, and feminism, and I look for places in texts that challenge those limitations and dismissals. Related to this, I also try to imagine connections among women that aren't premised on failure and open up possibilities for imagining alignments among women that can account for the differences that imperialism, colonialism, and racism have enforced.

My first book, Addressing the Other Woman: Textual Correspondences and Feminist Art and Writing (2018), looked at artists (Adrian Piper, Nancy Spero, and Mary Kelly) and writers (Angela Davis, Valerie Solanas, and Laura Mulvey) who were aligned with the feminist seventies, and who deployed language to interrupt dominant images of women and did so to address and create feminist audiences. I'm always looking for historical moments in which those kinds of correspondences, even if they're imaginative, have been foreclosed, but are also possible.

In terms of my day-to-day research practices, and how that looks, I try to wake up, drink coffee and write. If I can do that, then ideas and connections flow and my interests and my purpose become clear. It is a great feeling to discover what you're thinking as you're writing. There's nothing else like it. If I don't get to do that every day, I get kind of uncomfortable and frustrated.

Is there a particular text that you found to be formative in terms of your development as a scholar, or a text you're currently invested in that you could talk about?

In addition to “Words and Clothes: Sartorial Self-Fashioning and the Legacies of Enslavement” (see below), I'm working on an edited collection devoted to the work of Laura Mulvey. It's called “Laura Mulvey: Feminist Legacies” and it's trying to create a full account of her work and its impact across multiple fields, including, of course, film and film theory. A big part of my investment in Mulvey’s work is a film that she directed with Peter Wollen in 1977 titled Riddles of the Sphinx. Riddles is a very dense avant-garde cinematic text that draws on psychoanalysis and indexes the women's liberation movement in Britain in the 1970s. Right now, I'm returning to that film to think about issues of voice and the suppression of women's voices, particularly in public life and in public discourse.

Riddles continues to be a real resource for me. It has all these textual elements in it, as well as different layers of language and sound. It's like a book that I continue to read. The work of Classics scholar, Mary Beard, and her focus on gender and voice in the public arenas of western culture has really resonated for me as I have returned to Riddles and thought about Trump's election and the demonization of Hillary Clinton (among many other women). Scholars like Beard and theorists and filmmakers like Mulvey have been addressing the issues that center on the voice and that often register on affective and bodily levels. I'm fascinated by how often people respond negatively to women’s voices, but even more broadly, a voice that registers as feminine. Sometimes it hurts our ears.

The next question is about interdisciplinarity. It sounds like the kind of questions you're interested in would require you to have an eclectic set of tools. In terms of talking about or speaking across different objects like poetry, film, and literature.

Interdisciplinarity is a big part of my research and my teaching. My PhD is in English, American literature in particular, but I managed to pursue my interest in art, history, and visual studies by taking classes, reading, and going to museums. I also teach in the department of Gender, Sexuality and Feminist Studies, which represents a number of interdisciplinary fields. To me, the connections among these fields and disciplines seem obvious and intuitive, but pursuing them together has been harder than one might initially imagine, primarily because of the way the disciplines are organized in the university. However, I continue to think that interdisciplinarity is vital for feminist thought, as it allows us to trace the multiple and layered forces that come together to compose the recognizable images and lived experiences of race, gender and sexuality.

Could you say a little bit more about the talk you'll be giving. What do you hope people will walk away with?

My presentation comes out of my current manuscript, which is called “Words and Clothes: Sartorial Self-Fashioning and the Legacies of Enslavement.” In “Words and Clothes” I am illuminating a tradition, which I don't think has received adequate due, in which Black women writers from Reconstruction to the present crafted literary representations of clothing. I trace what fashion scholar Elizabeth Way calls a matrilineal heritage of sewing and writing from Elizabeth Keckley, who published her narrative in 1868, to Gwendolyn Brooks, who was writing in the middle of the twentieth century. I argue that these writers reveal clothing, fashion, and sartorial display to be poetic languages that speak to the psychic legacies of slavery’s sexual violence.

For this presentation, I’m focused on Quicksand (1928), a Harlem Renaissance novel by the writer Nella Larsen. At the center of Quicksand is Larsen's protagonist, Helga Crane, who is interesting, difficult, and unsatisfied with a lot, and rightfully so, as she is confronting Jim Crow America and trying to figure out her place in it. Crane also has this very refined aesthetic sensibility that manifests through her attention to fashionable clothing and interior decoration. Larsen links her protagonist’s attention to art, clothing, and fashion to her own work as a writer. What I'm trying to show is that Larsen is doing more than representing clothing as a theme but thinking about clothing as a form of writing that challenges the racist and sexist fabrications that get solidified in US visual culture. By doing this, Larsen defies the presumption that we can see through and easily understand Black women's subjective relationships to slavery’s violent legacies.

I hope I can show people the value of Black femininity’s relationship to clothing and fashion and encourage people to think about the role of clothing in Black cultural life psychoanalytically, which I think means understanding clothing and fashion as counterarguments to the history of Black women's commodification, and symptoms of their superficiality, which has been a consistent theme in the scholarship that is attentive to Larsen’s work. Her character Crane likes to look at clothes and buy commodities and often in the scholarship that dovetails with her psychic challenges, and so she is easily pathologized.

What classes are you teaching this year?

I'm teaching a course called “Fabricating Race: Art, Clothing, and Resistance,” which will become “Black Feminism and Fashion” in Fall 2023. “Fabricating Race” introduces students to a tradition in which Black American artists and writers make clothing a primary theme of their work. Clothing is often talked about as a second skin, and aesthetic representations of clothing open the possibility of reimagining the visual economy of race: the belief that race can be located in the body's physical features and characteristics. “Fabricating Race” asks students to engage with visual culture, material culture, and literary studies, and we attend to clothing as an aesthetic practice of everyday life that defies racism’s flattening and objectifying effects and affirms, often covertly, the value of Black people's lives.

I'm also teaching “Thinking Gender,” which is the core course in the Gender, Sexuality, and Feminist Studies Major. “Thinking Gender” introduces students to the theoretical frameworks that inform, and continue to inform, scholarship and in Gender, Sexuality, and Feminist studies, and I present feminist theory as a kind of writing that follows and examines the thinking that shapes how we understand gender, feminism, sexuality, and race. These concepts are notoriously stubborn, and feminist theory gives us a way to think about the possibility of transforming them. 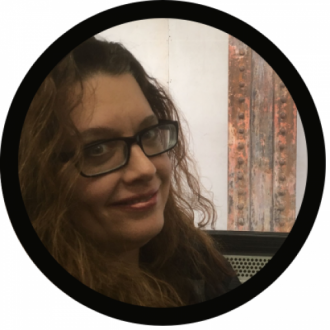