Dr. Laura Lieber is Professor of Religious Studies, Classical Studies, German Studies, and Divinity, and director of the Duke Center for Jewish Studies.

In this edited and condensed interview, she describes why she's interested in the texts enjoyed by "regular" Jews, how analyzing poems led her to thinking about performance spaces, and why life in antiquity was lively and entertaining—more than we might think.

My research interests lie in classical studies, religious studies, and theater. In undergrad, I majored in English literature and classical studies and minored in social work; after college, I went to rabbinical school, but I always planned on a PhD afterward. With my background in classics, I did my doctoral work in Jewish studies. From there, my research has gotten a lot broader.

I was originally interested in how the Hebrew Bible was experienced and understood by “regular Jews” in the ancient world. I started by looking at midrash, the most familiar body of literary texts, but I was concerned that these were a bit too elite for my interests. I was really interested in the Jews who I think of as my ancestors—the “regular” Jews.

I began to look at other forms of biblical interpretation, which led me to look at liturgical poetry. These works were used in the prayer service, so I knew regular Jews would have experienced them. They were about understanding the Jewish place in the world. They were history written by the losers.

From there, I branched out to study the liturgical poetry of other religious communities in the same time period. I work in the fourth through sixth centuries of the Common Era, which was a peculiar period where everybody, throughout all the different religious communities, was suddenly just crazy about religious poetry.

I realized that we have all this liturgical poetry from all these different groups because it was ultimately really popular and entertaining. It wasn’t just about serious theological work. We really have to look at them as part of popular culture of the time.

I’m now focusing on how religious performances in late antiquity were influenced by the theater, oratory, and popular entertainment of the period.

I started out interested in the visual studies of the liturgical poems. But I soon became interested in the performance spaces. When you study a poem, you typically analyze the literary elements. But I started to think, well, what did people actually hear? What could they see?

My research really started to take shape when I realized that synagogues and churches in the fifth and sixth centuries were often renovated to improve acoustics. To me this indicates that people in antiquity desired to hear the works that I study. They adapted spaces to improve the experience.

For a long time, the works that I study were very marginal even within Jewish studies because they were “popular,” unlike the elite rabbinic sources. Scholarly prose works were valued in a way that “common” texts weren’t. There was also an assumption that because the Hebrew can be quite difficult to us, no one at the time would have understood them.

What I’ve learned from studying the buildings is that people in fact wanted to hear these works and enjoy what was going on. They went through the trouble to raise or move the platform so that the speaker would be more visible. This was so practical yet so consequential for how people accessed and enjoyed these texts.

The fact that these works were so popular that the buildings were altered to help people enjoy them was, to me, really unexpected and important evidence that these works were a part of everyday life. I believe we wouldn't have so many works of this kind and so many copies if they weren't tremendously popular.

People who work in the early Byzantine period have begun do great sound studies in magnificent cathedrals and basilicas like Hagia Sophia. I like to imagine that we have, on one hand, these Broadway productions, and then on the other, the community theater productions over in the hinterland. 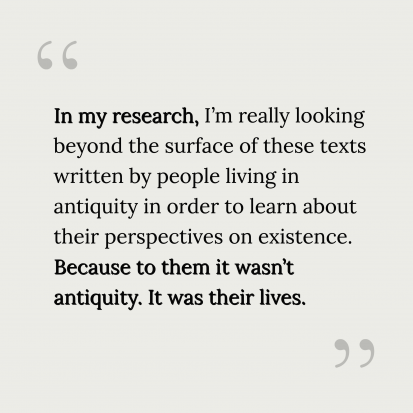 How has your background in social work influenced your research?

While studying classical studies and medieval English literature, I didn’t want to lose my connection to the outside world. In my social work courses, we studied more abstract systems theories, but we also learned about hunger, poverty, and class structures in a very lived way.

In undergrad, I worked with women in the AIDS crisis. I learned how someone who is comfortably middle class could suddenly see their health and career fall apart and face a lot of social stigma. I realized that we can feel protected, but a lot of that can be an illusion. We're living in a moment now where again the illusion falls apart.

I do believe that’s all shaped how I approach my work now. The works we still have from antiquity survived because they're the products of the wealthy and the learned. They were protected from the accidents of history, too much moisture, too much sun, things like that. My interests have always been attuned to fragility, and how easily things could fall apart.

I’ve always been interested in power dynamics and the lives of the more vulnerable. In my research, I’m really looking beyond the surface of these texts written by people living in antiquity in order to learn about their perspectives on existence. Because to them it wasn't antiquity. It was their lives.

I hope people will come away knowing that life in antiquity, even religious life, was really exciting and entertaining. I think we tend to assume that if something is religious, it must be solemn and otherworldly. But I keep coming back to how dazzling life was, in that moment, in the synagogues with music and mosaics and light. It was entertaining and impressive, as well as meaningful.

In antiquity, they knew how to put on a show. Even if the show was religious and the purpose was therefore on some level, deeply existential, it was still really entertaining. The various authority figures, you know, church fathers and rabbis, would complain about the fact that people wanted entertainment.

I work in this period between the Roman Empire and the Middle Ages that doesn't get as much attention. But it was a really lively and energetic period. There was this desire to connect. I think about how it’s similar to the way religious communities now often feel pressured to appeal to young people. There was a desire to bring people in.

What courses do you teach?

I have two new courses coming down the pike. One is about Jews in the Greco-Roman world, and the place of this distinctive ethnic and religious minority within a large empire. I’d really like for this course to help us learn about pluralism and think about navigating multiculturalism today by modeling what was both successful and unsuccessful in antiquity.

The other course is about translation, theories of translation, and translation and power. Many of the texts I work with have never been translated into English. I’ve found myself having to, initially by necessity, translate the works I study for people in related fields just so they can understand what I’m talking about. My goal is just to get people to read the same things I’m reading, and my writing and teaching are all attempts to explain why it’s cool. Translation is a part of that process.

I’ve realized that once you overcome the language barrier, you might find deep similarities and affinities between different communities. I’m very excited to take a semester to think about those issues of crossing cultural and semantic boundaries.

The Vocabulary of Desire: The Song of Songs in the Early Synagogue (Brill Reference Library of Judaism, vol. 40; Leiden: Brill, 2014).

“On the Road with Mater Dolorosa: An Exploration of Maternal-Filial Discourse in Performance,” The Journal of Early Christian Studies 24.2 (2016): 265-291.

“Law as Love-Song,” for Canopy Forum: On the Interactions of Law and Religion: https://canopyforum.org/2020/11/10/law-as-love-song/

“Demonic Femininity in the Ancient Synagogue: Dancing with the Angel of Death,” Stroum Center for Jewish Studies E-Journal, University of Washington: https://jewishstudies.washington.edu/jewish-history-and-thought/yannai-sotah-poem-piyyut-magic-demonic-women-lilith/

“I will flee to my Helper: A Rosh Hashanah Love Song,” for TheTorah.com:  http://thetorah.com/let-me-flee-to-my-helper-a-rosh-hashanah-love-poem/ (posted September 29, 2016) 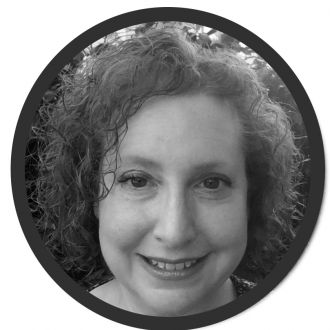