In this edited and condensed interview, he describes how science and society shape one another, the racist underbelly of assimilation, and how piecing together the lives of people living in the early 20th century can be a bit like detective work.

I’m interested in the role anthropology has played in public policy, popular culture, and the law, and I work mostly in the United States. I’m interested in the larger question of how science shapes society and society shapes science from the late 19th to the 20th century.

I started off looking at the African American experience and at how anthropology was used in cases like Plessy v. Ferguson and Brown v. Board of Education. Both society and anthropology changed during that time, and each had an influence on the other.

In my second book, I looked at the role anthropology played in fabricating indigenous constructions of authentic culture and policies that supported Native American autonomy and  the so-called “Indian New Deal.” I looked at everything from the use of peyote and rituals to salvage anthropology.

Now, in my third book, I'm looking at white folks and immigration, and I’m seeing once again that anthropology played a compelling role in the concretization of whiteness. Generally, people think the consolidation of the Italians, Slavs, and Czechs as “white” came after World War II. But I'm looking at the early 20th century, when the Americanization Movement really committed to assimilation.

My current focus is on assimilation as racism. During the Americanization Movement, anthropologists claimed that there were no substantial differences between the races in Europe. But in order for this “anti-racist” case to make sense, anthropologists had to show that there's a huge gulf between Caucasians and the other races: the Mongolians, Blacks, Native Americans, and Asians. It was completely racist.

There is a nasty and vicious underside to assimilation. In the early years of the 20th century, so much of proving your Americanness was about participating in racism. I’ve started to work on the Midwest, where there were smaller towns with few immigrants who were really trying to assimilate. A lot of race riots happened in these towns, and a lot of immigrants participated in them.

Racism is a scavenger ideology. It gives and it takes; it incorporates and then it shifts. A lot of people saw assimilation as anti-racist, but indeed the cost was racism.

What’s an example of how anthropology influences the law?

A great example is the number of court cases that decided who could be a naturalized citizen. There were two back-to-back cases: Takao Ozawa in 1922 and Bhagat Singh Thind in 1923.

To become a citizen at the time, you had to be a free white person. Ozawa claimed that although he was of Japanese descent, he was white. He was a Christian, he raised his children to be Americans, and he even argued that he had lighter skin than most Spaniards. He said that in his heart, he is white and American, and so he should be a citizen.

The court ruled that because the anthropologists say that Ozawa is Mongoloid, not Caucasian, he is therefore not white. According to science, he could not become a citizen.

The following year, Bhagat Singh Thind says that while he’s from India, he’s of a high caste, and is technically Aryan, and therefore he is Caucasian and white. The anthropologists indeed classified the people from his province in India as Aryans. A number of court cases were won along these lines, because it was “scientifically” backed.

There was one case in California that drove the district court judge nutty because he had to follow the science and anthropology even though he didn't really believe it. Then a year later, a similar case went to the Supreme Court, where it was deemed that any common man would look at a South Asian and say that they are not white. So instead of science, the Supreme Court decided to employ “common sense.”

The East and South Asians were making different types of anthropological arguments. But at the end of the day, white supremacy goes with the most authoritative answer to shore up white supremacy, whether that’s "science" or just "common sense." This is all a larger conversation about the influence of science on society. It’s very conveniently used when it supports white supremacy, but when it doesn't, it gets thrown under the bus.

My research starts with Franz Boas, the father of American anthropology, and his extensive collection of letters. W. E. B. Du Bois, who also had very good letters, and Franz Boas had a very complicated and interesting relationship. Just by following the intersection of those two very influential scholars enables you to then find stories and connections, leading you to newspapers, magazines, archives, speeches, and so on.

I'm one of the few cultural anthropologists you’ll ever talk to who doesn't do ethnography. I do the anthropology using other disciplines. My approach is very anthropological, but I lean a lot on media analysis, law, public policy, history of science, history, chronicling, “detective work,” and storytelling.

At the end of the day, I just love telling stories. These stories are so rich and with some of this stuff, you really can't make it up. Racism in society is so complex. Things line up in almost predictable ways from unpredictable material.

More recently, I've been really interested in looking at individual stories of people we don't know. The Library of Congress and ProQuest have digitized small town newspapers. With my interest in the Midwest, I looked at one that reported on two high schools in Central Minnesota that held a debate on immigration. Using tools like Ancestry.com, I started to piece together these peoples’ lives. It's a little weird, but it's public record. You know you can find out where they grew up, what they went on to do after high school, if their parents were immigrants, and so on.

It’s been useful for my recent work on the orphan trains. Missionaries took children out of orphanages in New York and put them on trains to go to the Midwest to do cheap labor. The children were racialized in New York as Irish, Slavic, or Russian, but overnight, they arrived in the Midwest as white.

I’ve been following some of the orphan train riders’ lives through Ancestry.com and putting together this whole mosaic of their lives, where they worked, and where they went. It's been an interesting tool to use old newspapers and Ancestry.com to develop real life stories of everyday people.

Recently I wrote about a young scholar in Harlem, Willis N. Huggins, who was working at the YMCA around 1911. He was interested in Africa and gave lectures on African civilizations to the local YMCA. At one lecture, he read an article by Franz Boas out loud. He eventually wrote a letter to Franz Boas, in appreciation of Boas’ contribution to knowledge. He wrote to Boas: “the army of youth are behind you.”

This young scholar later became a big wheel in the Harlem Renaissance. He became the chairman of the Harlem chapter of Carter G. Woodson’s Association for the Study of Negro Life and History. He befriended Du Bois. And he became a real mover and shaker as a public-school teacher and principal, trying to get African Studies taught in New York Public Schools.

Well, there are many people who are critical of Boas, and he said and wrote many cringe-worthy things, but it is it's important to see how he was read at the time, with this “army of youth” supporting this vision. It helped me understand the context a bit better.

The one thing I hope people will take away is that you can have the best intentions and ethical stance, but still contribute to racism, sexism, and discrimination. You just have to sit with that and understand that there is racism without racists and there is sexism without sexists. These ideologies, modalities, and social processes co-opt even the best intentions.

I think that's just a lesson for us, even today.

I also teach a graduate seminar called “Race, Racism, and Democracy.” We read contemporary ethnographies and then interview the authors. I've been doing this well before Zoom was even popular because I want graduate students to understand the process. These authors are human beings that struggled with every page and had challenges and joy along the way. I want to put a human face to the books that become part of my students’ educations. 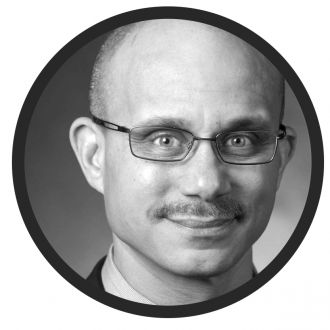