Broadly defined, my research interest is Black popular culture, with particular footing in Black popular music. My dissertation was a social history of Black music in the post-World War II period. I’m not trained as a musician or as a musicologist. Much of my work looks at music broadly in a way that is reflective of Black political and social life, and that focus has been expanded to also consider questions around popular culture — television, film, visual arts, and comedy, but also a real attentiveness to the performance of gender, particularly Black masculinity.

I'm trained in American cultural studies, but my first two degrees are in English. I was a creative writer as an undergraduate, and I studied African American literature in my master’s program. So I very much come from this kind of reading and critiquing a text, and extending the literary text into the cultural text. My interest in music, though, is a little bit more personal. It comes from my family upbringing: a house that was filled with music, and in particular a father who was filled with music. This is part of my [tgiFHI] talk: about how one of the gifts he gave to me as a father was his love of music, particularly as he was someone who was a functional illiterate, who couldn't read. So books and reading wouldn't be a part of what our relationship would become, but music would be.

Tell us about your research methods: what your day-to-day research practice looks like, and/or a particular text that you're working on right now.

My archive is culture in the broadest sense. When I'm working on popular music, the archive could literally be my collection of a 1,000 vinyl albums, my 1,000 CDS. In a digital era, those [media] are a little bit easier to manage. But my archive has never been a traditional archive. This is part of what I write about in Black Ephemera. When we talk about archives, we think about stacks, and we think about papers, and we think about libraries. My idea of “archive” is so much more ephemeral and that informs my research practice: a lot of time listening, a lot of time watching, and a lot of time listening and watching in comparison to each other.

For the day-to-day, the most important thing for me is always a writing piece. I always consider myself first a writer before a scholar. And while there is always research stuff that's going on in my head, it's always important to me to be able to get 500-700 words down a day, even if I'm not at the moment working on a project.

It sounds like you deal with an eclectic archive. Could you say more about the role of interdisciplinarity in your work?

I am an interdisciplinary humanist, even though I’m Chair of a department that sits in social sciences. But I’m very much someone who is steeped in and reading across literary scholarship, musical scholarship, and art history and visual scholarship. But I’m also reading in the interpretive social sciences — including anthropology, sociology, and some psychology — particularly around things like identity formation. For me, African American studies and Black studies are organically part of an interdisciplinary space. So it's virtually impossible for me not to think interdisciplinarily given the folks I’m in the department with and the ways that they think and how we collectively share ideas.

Could you speak more about the presentation you’ll give for tgiFHI? What is one thing you want people to take away from it?

It’s the first chapter and part of the introduction from a book project that I'm working on now called The Love Languages of Black Fatherhood. It’s intended to be a trade book, so the language is very accessible, but I’m also trying to mix in a memoir of both my experiences as a son to my father but also as a father to my daughters. I’m sprinkling that in with social science research but also a media critique. A huge part of the project is me reading through examples of Black fatherhood that have existed in popular culture over the last 50 years, particularly post-Moynihan Report.

If there’s one thing I hope folks get from this talk, it’s to think differently about some of the stereotypes that have been presented to us in thinking about Black fathers. In the American public imagination, Black fathers have been defined by absence, by not being present. You think of the way that white male basketball coaches become a stand-in for the “missing Black father” in collegiate sports and professional sports. I’m hoping that people will take away that Black men make themselves present in very different kinds of ways — the kinds of ways that don't necessarily show up in the kind of data that we collect about Black families.

Speaking of public-facing work, let’s talk about your other project, Left of Black.

This is our 13th season and our third season working in collaboration with the Franklin Humanities Institute. The project was an attempt to make an intervention: to be able to present scholarship in Black studies for a broader audience, and to use emerging digital technologies in ways that were unprecedented a decade ago. One of my models was Charlie Rose, but the Charlie Rose from the early 1990s, when he wasn't as pressed to have eyeballs and had a pretty wide-open space to talk to everybody: filmmakers, writers, intellectuals. It was actually watching Charlie Rose in the 1990s when I saw some of the first substantive public conversations with folks like Cornel West, Michael Eric Dyson, and Toni Morrison. But I also take as my model a public affairs television show that I grew up with in New York City called Like It Is, hosted by the journalist Gil Noble. He would take these hour-long segments over a Sunday afternoon and he would dig deep into pressing issues around Black America at the time but also dig deep into an archive of Black culture. That show [gave me] the first visual of Malcolm X’s speeches.

With Left of Black, I wanted to create a space that looked at what was being produced in in the name of Black knowledge and Black studies, and to do so in a loving way, but also for writers and scholars who PBS or NPR might not be paying attention to. I wanted to take a serious look at folks who are producing great work in the academy who wouldn't necessarily have the platform to be able to [share their work more broadly]. I think of the number of times I’ve heard from colleagues that they use episodes in the classroom or the number of folks who told me they discovered somebody that they didn’t know of because that person spoke on an episode. There was once a guy who stopped me in KFC a decade ago to tell me how much he loved the conversation we did with Cornel West in our first season.

Is there an interview that you're particularly excited this season?

We were able to take advantage of when the great historian Robin D.G. Kelley when he was in the area, and we shot an episode in the East Duke Pink Parlor. It was great to be in those kinds of spaces with Robin Kelley. He is someone who literally has been one of the most influential scholars on my career.

I'm teaching Images of Black Masculinity, which is a class that I've taught frequently over the last four or five years. But the particular focus is on the Black athlete, as part of a larger project that a few of my colleagues are doing here at Duke called Black in Blue: The Duke Sports & Race Project. In the spring I’ll be teaching a course on the history of Black comedy: another class I’ve taught frequently over the past several years. The class is endowed by the estate of Jenny Koortbojian, so it allows us to use more resources to bring in speakers and show films and things of that nature. 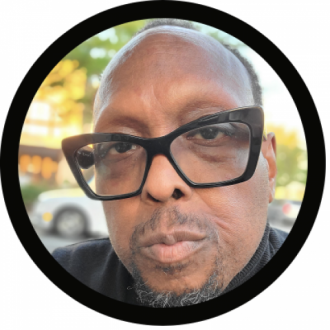