Our Fall 2022 tgiFHI series concludes with Stefani Engelstein, Professor of German Studies. Here's an interview with Prof. Engelstein on her research interests, method, and practice.

I work at the intersection of literature and the history of science, particularly the life sciences. I am interested in the ways that different disciplines ask questions that address similar issues but pursue the creation of knowledge differently. I also investigate some figures and methodologies that travel between disciplines. I guess I have always been attracted to both literature and the way living things work, but it wasn’t until college that I realized that the questions I wanted to ask about living things were not scientific questions, but were humanities questions. So I switched my major from biology to literature. It wasn’t until I was in my second year of graduate school that I saw how these interests could come together. I was reading William Blake and Heinrich von Kleist for two different seminars. In Blake’s mythological poetry, body parts are literally rolling around on mountain tops and bodies coalesce together with the worlds that allow them to become meaningful. In Kleist, on the other hand, bodies are subjected to violence that explodes them and reveals their fissures and the risks associated with how they come to mean. Bodies in both cases are interwoven with political and social constructs. And so I thought, I need to look at these things together — for example, at the embryology that Blake learned about in anatomy lessons at the Royal Academy of Art, or at the history of amputations that might inform Kleist’s mentions of amputees dancing on prosthetics, and which, it turns out, he might have witnessed as a young military officer. So that was the starting point.

Tell us about your research methods: what your day-to-day research practice looks like, and/or a particular text that you're working on right now.

Usually what happens is that I am reading a work of literature and I notice something that makes me want to explore scientific writing of the period, although it can run in the other direction too. For example, I was teaching a Kafka short story in the spring of 2021, before we had a vaccine for Covid. It was Kafka’s penultimate story, written as his tuberculosis was advancing. The story, “The Burrow,” features an isolated burrowing creature as its first-person narrator, and the Creature hears a noise that it can’t identify, but that sounds like air whistling through a tube. And I thought, what are the sounds of tuberculosis? Other scholars had associated the story with Kafka’s disease in one way or another, but nobody had asked this question before. I went to medical textbooks from the 1910s and 1920s and learned about how tuberculosis was diagnosed through physicians listening to the sounds of the lungs, either with a stethoscope or by laying the ear on the patient’s chest.  I paid attention to the language used to describe those sounds. I also read Kafka’s descriptions of his illness in diaries and letters and discovered that he had seen some of the medical records reporting the sounds his lungs made — which he couldn’t hear directly. Those records still exist and I was able to get digital photos from the archives where they are housed and I even deciphered the physicians’ handwriting, with the help of what I had learned and also by talking to another historian of medicine and to a pulmonary specialist. This work allowed me to see in Kafka’s story a reflection on the transmissibility of disease through air, but also on the communicability of worldviews through literature, and on the position of fiction with respect to the mortality of its author and its readers.

While this work focuses on one story and very specific biological conditions, my work is just as likely to address how whole systems of knowledge are built, for example, the way genealogies or family trees structured disciplines from linguistics to biology to comparative religion to race theory in the 19th century. Or, in my most current book project, the way that sexes came to thought of as opposite rather than merely other and what how that concept of opposition gave the act of sex a foundational role in philosophy and literature.

Could you say more about the role of interdisciplinarity in your work?

Interdisciplinarity has been billed as an innovative goal for generations now. But what does the word actually mean? I think there are a lot of different approaches that address disciplinary boundaries and make them porous in various ways, but that it is important to understand one’s own methodology and goals. My methodology of close-reading and analysis allows me to investigate how different disciplines construct and transmit knowledge and also how they contribute to the social world we share.  I investigate materials that come out of a variety of disciplines. My methodology, however, comes out of my training as a literary scholar. It is the humanities that have taught me to pose the significant questions I ask of the world, including of the sciences.

Could you speak more about the presentation you’ll give for tgiFHI? What is one thing you want people to take away from it?

I came to the topic for the talk — which is called “Divisive Affect, Loyalty, and National Cohesion: Du Bois contra Wagner” — through first reading a work of fiction by W.E.B. Du Bois, who himself inhabited a number of disciplinary worlds, by the way.  His first job was as a Professor of Classical and Modern Languages, including German, at Wilberforce University. Du Bois was interested in Wagner, whose operas he first came to know as a Master’s Student at the University of Berlin, and which he attended throughout his life. Wagner comes up several times in The Souls of Black Folk.  The question is, given their very distinct views on race, what was Du Bois doing with Wagner? I find a way to explore that question through this short story Du Bois embedded in Souls in which he uses the narrative form to illustrate the pernicious effects of models of nation-building such as Wagner’s that depend on the suppression of history. While not only modern American politicians, but also many earlier thinkers advocated forms of ignorance or forgetting of historical trauma to foster supposedly common feelings of belonging, Du Bois reveals the way that affect is passed down through generations whether discussed or not, motivating action that, if not reflected upon, repeats traumatic violence. The open question of the story and beyond the story is how to intervene in such cycles of repetition. Is knowledge, is education, enough, even if it is open about the past?

The talk is related to my interests in literature and science through the concept of race, which was theorized as scientific in a number of disciplines from the late 18th century through much of the 20th. My work here is informed by Critical Race Theory.

Duke and the University of North Carolina have a fully merged graduate program in German Studies called the Carolina-Duke Graduate Program in German Studies. With a colleague at UNC — we are the co-Directors of Graduate Studies (DGS) for that program — I am leading a dissertation colloquium both semesters this academic year. The colloquium gives students a chance to distribute dissertation chapters and receive both peer review and comments from both DGSs. It’s also an opportunity to provide job market support.

I am also teaching a first-year seminar this fall and a graduate seminar in the spring. In addition to being German Studies courses, both are cross-listed with Gender, Sexuality, and Feminist Studies, where I have a secondary appointment, and the first-year seminar is also cross-listed with English. The first-year seminar is called Monstrous Births: Coming to Life in Science and Literature of the Nineteenth Century and it’s about both artificial life and strange births in the nineteenth century — think Frankenstein, automata, and weird births, as well as the history of science surrounding such fiction. It’s a way to reflect on anxieties and hopes surrounding the sciences and the natural capacities of bodies, as well as whether such capacities can be distinguished from social productions. The graduate seminar in the spring is called Relationality and the Individual: Self, Other, Environment around 1800 and Beyond. Around 1800, people began thinking about life as a category founded on processes rather than just on physical structures. This emphasis on forces made the boundaries of any living individual an open question. The class will look at literature, philosophy, and scientific texts that explore the drawing of boundaries through interactive exchange, often creating oppositional categories in the process, such as opposite sexes or organism and environment. 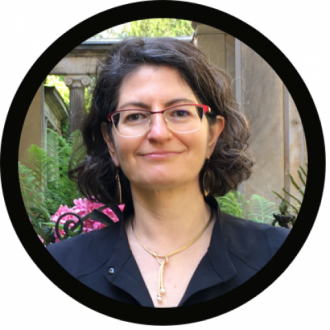