Guests at the Rubenstein Arts Center Ruby Lounge on February 28 were treated to a poetry reading and interview from Romeo Oriogun. Sponsored by the Franklin Humanities Institute with Co-Sponsors including the English Department, the event brought in poets and poetry fans across disciplines and connections to Duke. The critically praised author of “On the Origin of Butterflies,” heralded for his leadership in a “new African poetry” movement, spoke about his ancestry, identity, and artistry before performing published and developing pieces from his portfolio.

Oriogun is the winner of the 2017 Brunel University Prize for African Poetry, and is currently in residence at Harvard University. In addition to writing his own prose, Oriogun plans to publish his research about “new voices in queer Nigerian writing.” Through his research, he tracks how trends amongst young artists in his home country have changed in thematic focus over the last decade. Rather than writing about queerness as an assertion of identity, these artists have begun to instead write about their experiences of love and less traditionally masculine topics such as “walking in the rain.”

In the interview that preceded the reading, Oriogun spoke with English and African and African American Studies professor Tsitsi Jaji about his craft. As a conscious researcher and writer, Oriogun is well suited to track as well as usher in the changes in African poetry that he discussed. On his queer identity, Oriogun reminded the audience that “queer people have always existed in Africa” and modern repression is, in part, a reflection of discriminatory colonial laws imposed across the continent. This dichotomy, showing the conflict and also natural coexistence of the artist’s queerness and African heritage, were in full display in the poems that Oriogun shared.

The pieces that Oriogun shared were both particular and universal, capturing his personal experiences as a queer Nigerian man while distilling the intimate emotions he writes about to his audience. In “The Origin of Butterflies,” Oriogun explores gender, sexuality, and repression of identity: “There is a place where butterflies live – mother / said happiness can come from sadness.” As he explained to his receptive crowd, the poem is also a “declaration of refusal” in which he rejects the “compulsion to write only despair, isolation, and confusion.” In this way, Oriogun creates the poetic space for complicated thoughts that such reflections deserve. He also used his poetry to explore life and loss, explaining that being conscious of death lets the poet “maximize his joy, freedom, and love.”

Oriogun’s voice is soft yet intentional; reservedly monotone but colorfully emotive. As he read a piece on migration, a calm voice belied the emotional turbulence at the heart of the lyric. A concentrated, performed rhythm demanded that the words push forward. This performative element gave the poem another dimension of meaning, recreating the queer experience of movement that can’t be expressed with the same intimacy through text.

Moved by the lyrical and emotive poetry, audience members responded to the reading in an impromptu question and answer session. Oriogun shared that he views his audience firstly as himself, but hopes that Western audiences who read his English prose and young Nigerians growing up as he once did can also find themselves in his work. One member, a fellow queer person raised in Africa, used her questioning time to thank Oriogun for giving voice to the many queer people that exist in Africa.

That the Duke artist community so values different poetic voices is one of its greatest features. Not only is Duke home to poetry courses, publications, and student writers, professional poets leave a legacy through performance to the Duke community. Though brief in time, these poetic moments metamorphosize in the memory of their audience as new African poetry finds a liminal home in Durham. 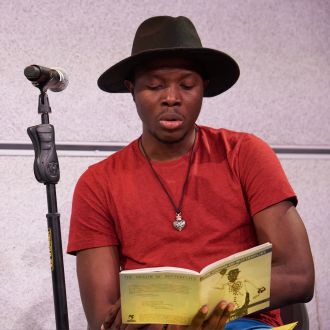 Romeo Oriogun reading from "The Origin of Butterflies" at the Rubenstein Arts Center on February 28, 2019. Photo courtesy of Dean Rhoades.