In December 2017, FHI’s new Publishing Humanities Initiative and the Story Lab collaborated on a workshop event focusing on the history and culture of zine-making, “Publishing It Yourself: Pamphlets, Zines, and Riot Grrls.” Sallie Bingham Center for Women’s History and Culture curator Kelly Wooten gave a talk on the role of zines in Third Wave feminism, followed by a creative, hands-on zine-making workshop, in which participants learned to create and fold a simple zine illustrated with their own collages.

During her talk, Wooten described Third Wave feminism in the early 1990s. She shared Riot Grrl zines and a map showing how these informal photocopied publications with edgy drawings and revolutionary ideas traveled across the United States and beyond, through the mail and the hands of couch-surfing musicians.

Drawing a connection from the past to the present-day conversation on sexual harassment, she read aloud a quotation from Rebecca Walker's 1992 essay in Ms Magazine, "Becoming the Third Wave," penned in the wake of Anita Hill's testimony against Clarence Thomas:

"To be a feminist is to integrate an ideology of equality and female empowerment into the very fiber of my life. It is to search for personal clarity in the midst of systemic destruction, to join in sisterhood with women when often we are divided, to understand power structures with the intention of challenging them. While this may sound simple, it is exactly the kind of stand that many of my peers are unwilling to take. So I write this as a plea to all women, especially the women of my generation: Let Thomas’ confirmation serve to remind you, as it did me, that the fight is far from over. Let this dismissal of a woman’s experience move you to anger. Turn that outrage into political power. Do not vote for them unless they work for us. Do not have sex with them, do not break bread with them, do not nurture them if they don’t prioritize our freedom to control our bodies and our lives.

"I am not a postfeminism feminist. I am the Third Wave."

Remarking on the power of the Wooten’s reading, Publishing Humanities Initiative Senior Program Manager Sylvia Miller said, “Hearing about a low-tech underground movement so relevant to our current odd and crucial moment in the history of feminism was a natural invitation to create and communicate in ways unmediated by digital tools.”

Indeed, several participants were activists or publishers interested in returning to the “maker culture” of zines and the human connections they create. Some new acquaintances were even inspired to invent a zine collaboratively, and stayed on past the official end of the 2.5-hour event to finish sewing their pamphlet bindings.

In addition to Duke students, the “sold-out” workshop included artists, a documentary historian, a public historian, a publisher of an online community newsletter, two high school students, a bookseller from the Regulator bookshop, an activist, an educator who works with junior high kids, a scientist who is also a novelist, and a creator of zines for charities.

“The variety [of participants] was exactly what one might hope for in a public humanities context,” Miller said. 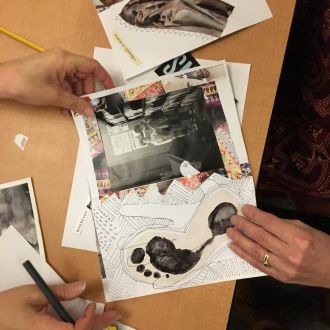