This article was originally published on Duke Today.

Frustrated by rising anti-immigrant sentiment in the US, Europe and elsewhere, Duke professor Michael Hardt and a group of friends wanted to do more than just express their outrage.

So they bought a boat.

They pooled their money, got a loan, and spent 400,000 Euros on the Mare Jonio, a 37-meter tugboat they found for sale in an Italian port. Registered in Italy and sailing under an Italian flag, the ship cannot be refused entry at an Italian port – which means it can legally deliver desperate migrants to safety if it rescues them from international waters.

It sailed Oct. 3, headed to the international Search and Rescue Zone off the Libyan coast. Officially, it’s monitoring the situation there. But if it comes across migrants in need of help, it will pluck them from the sea, as any ship is required to do by international law, and bring them back to Italy to enter the asylum application process. As of Oct. 15, it had not encountered any migrants in distress. But, probably because of the ship’s presence, Italy and Malta have reversed their recent policies and begun rescuing migrants again, said Hardt, a professor in Duke’s Literature program.

“In the immediate sense, this is a humanitarian project; the ship is making sure that people in distress receive needed assistance,” he said.  “At another level, I wouldn’t call it a protest, but it’s more like a political demonstration that will hopefully throw into light the problems with current policies. And it will show we can do something about them.” In addition to launching the Mare Jonio, the project has created a platform, Mediterranea, which has initiated assemblies and a series of public discussions on migration in cities throughout Italy.

Hardt is one of two people with Duke ties involved in the project; the other is Sandro Mezzadra, a political theorist at the University of Bologna in Italy who, along with Hardt, are co-directors the new Social Movements lab within Duke’s Franklin Humanities Institute.

Since buying the boat, the group has partnered with several non-profits and a non-governmental organizations, each of which has provided resources. The ship is accompanied by a second, smaller vessel provided by a Spanish NGO, and the non-profit Sea-Watch is helping with planning and oversight. The endeavor has also gathered support in recent days from politicians in Italy, including the mayors of Palermo and Naples, Hardt said.

The ship has a seven-member crew and is expected to sail for two-week stints, Hardt said. There’s about a six-week sailing window left before winter weather makes the venture impractical, he said.

The group characterizes its project as ‘civil obedience,’ rather than ‘disobedience,’ because it’s following the law.

“We can do more than simply protest; we can do something constructive. For us that’s an important element of this project,” Hardt said. “Instead of lamenting that nobody’s doing something about this, we’re trying to do something about it. And more important than that, we’re convinced the powers of and support for racist government policies are weaker than they really appear. We trust that by acting against them, we’ll demonstrate that.” 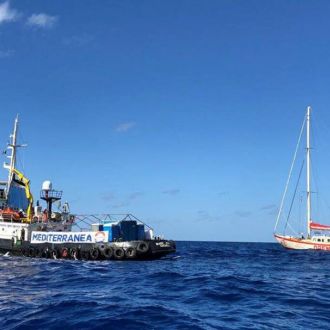 The Mare Jonio, left, has taken to sea in search of migrants in distress.