The lecture also speaks to a theme that the FHI selects annually or biannually to frame its programming; for the 2019-2020 and 2020-2021 academic years, that theme is World Arts.

“More than any other art form, architecture takes on the literal task of worldmaking,” said FHI Director Ranjana Khanna in her opening remarks, explaining why she and the committee had selected Sir David Adjaye as this year’s lecturer.

In his lecture, Adjaye presented six architectural projects “in a circuitous route around the Black Atlantic,” roughly following the trajectory of the triangular slave trade — the Ghanaian Pavilion at the 2019 Venice Bienniale; the Bernie Grant Arts Centre in Tottenham, North London; Ruby City in San Antonio, Texas; the Studio Museum in Harlem; the Smithsonian National Museum of African American History and Culture, and the Ghanaian National Cathedral.

These diverse projects — art installations, museums, galleries, places of worship, theaters, teaching centers and artist’s studios —  embed the legacy of the African Diaspora within the built environment. Adjaye called them “spaces, monuments, and places that load sites with knowledge, or knowledge-producing or knowledge-sharing systems,” indicating that they reflect the future as well as the past.

Adjaye first spoke about how he approached the design of the first Ghanaian Pavilion at the 2019 Venice Bienniale, the first in the country’s history, describing it as an opportunity to make “a big statement” through “positive propaganda of an African country.” The exhibit was installed inside a series of ellipses that lead viewers from chamber to chamber, modeled on the classical red earth-rammed architecture of the Sahel. Kilos of Ghanaian soil were shipped to Venice to serve as materials, and a villager from Ghana supervised the pavilion’s construction.

In collaboration with Adjaye, exhibit curators Nana Oforiatta Ayim and the late Okwui Enwezor decided to trace Ghana’s history from independence to the contemporary, evoking the theme of Sankofa, or returning to the past. The pavilion housed artworks by sculptor El Anatsui, exploring the history and the devastation of the Gold Coast; photographer Felicia Abban’s documentary archive depicting “the postcolonial condition” of Ghanaian women’s lives in the 1950s; filmmaker John Akromfrah’s three-channel installation about the continent, containing “tragic but beautiful narratives”; artist Ibrahim Mahama’s installation of materials from a postwar fish-smoking factory, evoking themes of industrialization and decay; artist Selasi Awusi Sosu’s installation of bottles from a closed 1960s factory in Accra; and, from painter Lynette Yiadom-Boakye (“one of the most important painters in the world right now,” according to Adjaye), “portraits of Black normal life - how radical is that?”

Adjaye said that the pavilion “gave you a kaleidoscope of many trajectories to understand the multivalent nature of this project.”

Adjaye then turned to the first major cultural project that he worked on in 2007, the Bernie Grant Arts Centre in Tottenham in North London. Named for the first Black MP elected in Britain, the Guyanese-born Bernie Grant, the center is located in a culturally vibrant, predominantly Afro-Caribbean neighborhood.

Working with a previously existing Victorian town hall and fragments of a bathhouse, Adjaye designed a campus with three new buildings: an education building, a performing arts centre, and an enterprise zone, where entrepreneurs are allotted spaces with subsidized rent for a year to launch their businesses.

He described it as an “all-encompassing system: a place to perform, a place to gather...and a support mechanism to train the community.”

The exterior of the theater has a large overhanging porch system with a canopy of Guyanese hardwood from the hometown of the Centre’s namesake, Bernie Grant.

Adjaye then spoke about the Ruby City museum in San Antonio, Texas, which he designed to showcase the collection of the famed art collector and advocate, the late Linda Pace. Called “the artist’s collector” by her friend Isaac Julien, Pace was one of the first major collectors of the African diaspora, and an early buyer of works by prominent artists like Julien, Wangechi Mutu, and Teresita Fernández.

When approaching the project, Adjaye became interested in the geography of the area surrounding San Antonio and the traditionally earthbound architecture of the pueblo. He also noted that its red earth reminded him of African soil. However, Pace herself was a major influence on the design: she shared a fantastical sketch with Adjaye of how she envisioned her museum, as a shining city on a hill, almost like a Russian Orthodox Church. Pace’s sketch inspired the museum’s eventual name, “Ruby City.”

Deciding to bring these “worlds” together, Adjaye’s final design incorporated elements of both. The building rises from the earth, evoking the pueblo, and its exterior red concrete is imbued with glass that reflects light and sparkles in the sun. Three galleries top the structure, their shape evoking artist’s studios, in homage to Pace’s unique relationship to artists, whose studios she would regularly visit. Clerestory windows and a carefully placed oculus at the building’s entrance play with the viewer’s perception of light.

Turning towards a project “that’s just starting on site,” Adjaye described his design for the Studio Museum in Harlem, New York, opposite the famous Apollo Theater. The museum was “founded in 1968 to deal with preserving, promoting, incubating artists of color.”

Adjaye described his vision for the building as a “series of living aediculas,” a neoclassical term for a shrine set inside a relief and framed by a portico (a roof supported by columns). However, the Studio Museum would not only evoke the aediculas of Harlem’s residential architecture, with their “famous stoops that really activate the culture, and it’s really the public living room of this community,” but also serve as a frame for the forms of public life that it develops and nurtures.

“The test is to make this a real public space,” Adjaye explained, showing illustrations of descending staircase at the museum’s entrance, a “reverse stoop” that “brings the street right in.”

The Smithsonian National Museum of African American History and Culture is perhaps Adjaye’s best-known project. Opening in 2016, it completed the circuit of national museums laid out on the crossplan of the Mall in Washington DC, which Adjaye describes as “a perfect piece of political theater”: “The White House sits on a hill overlooking this whole thing...presidents bring world leaders [there], and say ‘Look at America.’”

In contrast to the other museums on the Mall, which are “encyclopedic, archival, and about collections,” Adjaye described the NMAAHC as a “narrative museum” that brings the visitor into the experience of “the history of the African American community’s contributions to the making of America.” Beginning with that community’s origins, he showed a diagram of the Atlantic slave trade, which transported millions of Africans from West and Central Africa to the Americas and the Caribbean. Of those, a relatively small number - 500,000 - came to the United States, whose descendants number 35 million today.

At an event at the Franklin Humanities Institute the evening prior, Adjaye had discussed his role as lead designer of the museum with its senior project manager Zena Howard. During the design process, they said, they and director Lonnie Bunch decided on a number of “irreducibles” on which they were not willing to budge, two of which were the museum’s corona shape and its lattice exterior.

The inspiration for the museum’s corona, or three-tiered exterior, comes from the Benin region, where a style of interweaving figural art with traditional principles of abstraction was passed down by generations of master craftsmen, and was adopted as the architecture of the royal court in a number of African kingdoms. Within the shrines of the inner courts of the Benin stood caryatids, wooden carved statues representing kings or other historical figures. One in particular, by the Nigerian master Olowe of Ise, wore a three-tiered crown, which inspired Adjaye’s design.

The museum’s lattice, Adjaye explained, was “derive[d] directly from a panel that we analyzed from Charleston of what we believe was a house built by slave iron workers.” He noted that it was likely that some of these workers were descended from Benin bronze casters, and that the formal interplay between the corona and its lattice design articulated an important part of the story of African Americans. “[L]abor is a very important part of understanding what slaves did, which was to literally build the infrastructure of the country. So there's a translation between that figure, this wooden figure and this iron work. And they become the hybridity that becomes the language of the form.”

Adjaye discussed a number of other elements in the museum’s design - including the fact that fully half of the building is underground, which was necessary because of the height limit for building in Washington, DC. (The sublevel is also where museum visitors begin their journey through the museum’s galleries, which lead them through African American history from the 1600s onwards.) Outside, a porch -- another one of Lonnie Bunch’s “irreducibles” -- provides a cooling spot for the public to gather on hot days.

Finally, Adjaye briefly described another one of his latest major projects, the National Cathedral of Ghana. The cathedral is part of current Ghanian president Nana Akufo-Addo’s plan to fulfill Nkrumah’s original vision for Black Star Square (also called Independence Square) in the heart of the capital city Accra, where the buildings of parliament and cemetery of heroes are located.

The cathedral connects to parliament through a linear landscape. “Enormous” in size, it holds 5,000 people, but expands into an arena to hold 15,000 people on special occasions.

Adjaye based his design on the form of the Bauman umbrella, which in the Ashanti culture signified the revelation of a king. "I have sought to craft a building that not only understands its landscape, but one that will be unique to Accra and the Ghanaian nation.”  The building itself transcends the sole purpose of a chapel and is instead about cultivating a cultural landscape of public space. This new public landscape is both a celebration of community — “a space to honor our ancestors and legendary forefathers who came before us” — as well as a monument to the spirit of a Nation articulating its own future.

Since the project is not yet at the building stage, Adjaye played an animated video of the cathedral plans. It was set to “the president’s favorite music,” an instrumental version of the American hymn “Blessed Assurance.”

Through focusing on these six projects, Adjaye explored the concept of “world arts” in a number of ways. His lecture reflected on how our built environments respond to different planetary geographies; how histories of colonization, enslavement, and diaspora both create and destroy world-making connections between regions and continents; and how architecture can engage with both site-specific and broader histories, even as it shares knowledge systems that equip its publics for the world-making of the future.

“Buildings have meanings, and societies build in order to create something meaningful,” said Paul Jaskot, Professor of Art, Art History & Visual Studies Paul Jaskot. “[Adjaye’s work is a] challenge to think deeply about what we need and value as a society." 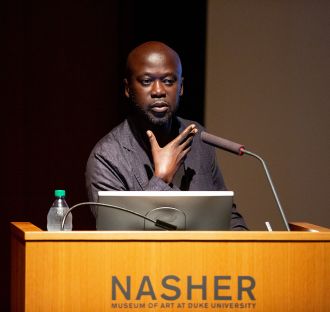