Along with co-directors Richard J. Powell, Jasmine Nichole Cobb, and Lamonte Aidoo, the Franklin Humanities Institute celebrated the launch of the From Slavery to Freedom Lab on the afternoon of Thursday, September 27, 2018, with remarks from Duke University Dean of Trinity College of Arts & Sciences, Valerie Ashby; Cultural Historian and Senior Manager in the Office of External Affairs at the Smithsonian Museum of African American History and Culture, John Whittington Franklin; and Director of the John Hope Franklin Research Center at the David M. Rubenstein Rare Book and Manuscript Library, John Gartrell.

Dean Ashby talked about the ways in which the lab will provide “incredible learning opportunities” for Duke students through building relationships with university programs such as DukeImmerse, as well as local sites with connections to slavery, such as Historical Stagville, in addition to its projects tracing local and regional histories to the Caribbean, South America, and West Africa.

John Whittington Franklin described how growing up as the son of the scholar John Hope Franklin prepared him for his career in the public humanities through early introductions to the global African diaspora.

“If you look at the first edition of From Slavery to Freedom,” Franklin said, “my father makes a point of looking at African history first, and looking at the dispersal of African people in the Caribbean and particularly Brazil, and you think of this information being shared with a broad public in 1947, and it really has a tremendous impact.”

His father’s world travels influenced Franklin from an early age, and led to studies abroad in France, Trinidad, and Martinique as a young teenager. These set the trajectory for his career at the Smithsonian, where he manages African American, African and African diaspora programs.

John Gartrell proudly noted that the John Hope Franklin Research Center was the first institute at Duke named after John Hope Franklin. He said it was a fitting tribute to the historian, given his lifelong relationship to libraries and archives, and shared a few anecdotes from Dr. Franklin’s life.

The co-directors thanked the guests for attending and announced a 2018-2019 African Diaspora Speaker Series. The first speaker in the series is Hazel Carby from Yale University on Wednesday, October 10, 2018. The next is France Winddance Twine from the University of California, Santa Barbara, on Tuesday, October 23, 2018. 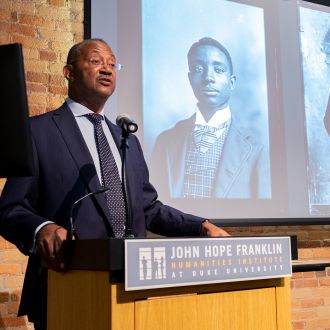 John Whittington Franklin speaks at the From Slavery to Freedom Lab launch. Projected in the background are images of his grandfather, Buck Colbert Franklin, and father, John Hope Franklin. Photo by Eric Barstow.