On Tuesday, March 19, 2019, the Italian government seized the rescue ship Mare Jonio after it came to the aid of a boat in distress off the coast of Libya and delivered its passengers, 49 migrants from east Africa, to the nearest safe port in Lampedusa.

Social Movements Lab co-directors Michael Hardt and Sandro Mezzadra are members of Mediterranea, the activist group that bought the Mare Jonio and launched the ship in October 2018. They spoke about the project as part of a Franklin Humanities Institute event series on March 21, 2019, a couple of days after the ship was sequestered (full video below).

According to Hardt, the project was conceived last year in response to an anti-migrant campaign by the Italian government. In June 2018, Interior Minister Mateo Salvini refused to allow an NGO ship carrying over rescued 600 migrants to port. In August 2018, he held a Italian coast guard ship at port for ten days, insisting that other European countries commit to taking in the migrants onboard before finally allowing them to disembark. Italy’s increased criminalization of migrant aid has pushed NGO ships to withdraw from life-saving monitoring and rescue activities on the Mediterranean, and has led to a proportionate increase in deaths as migrants are forced to travel under more dangerous circumstances.

The Mare Jonio flies an Italian flag and employs an Italian crew, which the activists anticipated could create legal difficulty for the Italian government if it attempted to disallow the ship to port and deny onboard migrants the opportunity to apply for refugee status. They purchased the boat during the summer of 2018 and launched it in October.

During the boat’s first missions in the search-and-rescue zone off the Libyan coast, according to Hardt, “it seemed like the Italian government was trying to make sure our ship didn’t rescue any migrants.” Since this prompted a reversal of government policy, as Italian and Maltese ships swept in to perform rescues and bring migrants into port before the Mare Jonio could, he said it was a “humanitarian success,” if lacking the type of conflict they hoped would draw wider attention to the situation on the Mediterranean.

The ship’s seizure begins a political phase of the project in which the activists are in a direct confrontation with the Italian government, whose immigration policies, they argue, are fueled by identitarian nationalism, xenophobia, and racism.

Hardt and Mezzadra pointed out that international law obliges ships to aid other ships in distress and to deliver passengers to the nearest safe port. Instead, the Italian government has forced ships carrying migrants to return to Libya, which the United Nations has designated as an unsafe port. Mezzadra cited international reports from the UN and NGOs describing “horrible” conditions in Libya’s detention centers, which are labeled “concentration camps”: “Torture, exploitation, violence is an everyday situation in these centers.”

Acknowledging the complex and overlapping legal structures at play, Hardt says that while Mediterranea might not be in alignment with current Italian policies, it is obeying international law.

Mezzadra said the project had raised over 600,000 Euros from crowdfunding.

The 49 migrants, including 15 minors, were allowed to disembark at Lampedusa and are expected to be able to begin the refugee application process.

Update: The Mare Jonio was released about a week after its sequester. Its captain Pietro Marrone and mission leader Luca Casarini are currently under investigation for “aiding illegal migration.”

Our ship is free! Free to sail again in the Mediterranean, to engage in new monitoring operations and to rescue migrants in distress. Against a politics that aims at emptying out the sea of witnesses and rescue vessels we'll continue to claim the right to intervene. #FreeTheShips pic.twitter.com/GFOuLoIjHa

The Mare Jonio plans to return to sea. Updates will be posted as the story develops. 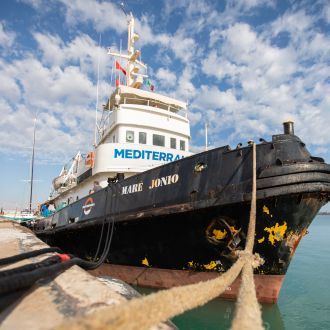