Former Duke President Richard Brodhead gave the speeches compiled in a new book, but, he says, “they are not about me.”

The main character is, rather, Duke University.

In “Speaking of Duke: Leading the 21st Century University,” published this month by Duke University Press, Brodhead compiled more than three dozen of his speeches, statements and interviews from his 13 years as university president. The occasions range from Brodhead welcoming students at the start of the 2004 academic year to his appearance discussing the future of the humanities with comedian Stephen Colbert on “The Colbert Report.”

However, in its variety, the collection offers Brodhead’s perspective on the key issues facing higher education, as seen through his perspective as leader of Duke University during a remarkable period of growth and expansion for the university.

“The story is of an ambitious university navigating its way forward through difficult currents in ever-changing weather,” Brodhead writes in the preface. “I hope, however, that a few things will be clear about the author: how grateful I remain for the privilege of serving Duke, how engaging I found the challenges of this job from first to last, and what confidence I have that Duke will continue to flourish long after I have passed the baton.”

Arriving at Duke in 2003, Brodhead said he benefited from a moment in which Duke was ready to explore interdisciplinary strengths, increase engagement with society and expand its international reach, and had the resources to do so. He writes that the first years of the new century “were a bright time for higher education, especially in private institutions.”

“Financially there was some margin for investment (never enough), so these years allowed for renovation, innovation, and experiment. But as they advanced in some directions, universities found themselves facing new forms of difficulty in these years, Duke along with every other.” 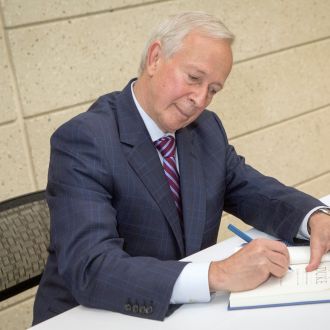