When was the last time you attended an all-night event?

Running overnight from 8pm on Friday, April 20 to 8am on Saturday, April 21, Story Con is a one-of-a-kind, one-time-only, open-to-the public storytelling festival in the Story Lab, one of the five humanities laboratories affiliated with the Franklin Humanities Institute in Smith Warehouse.

Like every FHI humanities lab, the Story Lab is organized around a central theme—storytelling, with a special focus on communal storytelling, storytelling and material culture, and other interactive modes, like the types of fan conventions that Story Con is modeled upon.

“We like to think of Story Con as a mash-up track uniting the Night of Philosophy and Ideas and pop culture conventions like San Diego Comic Con,” says Story Lab manager Sabrina McCutchan. “It’s also a way to reprise, or give an encore to, all of the things that have been part of Story Lab’s DNA over the past three years.”

These things include a hallway cosplay contest to compete for prizes, a custom book- and zine-making workshop, and a tabletop roleplaying game session in which participants embody fictional characters. The Story Lab is committed to reflecting the creative and diverse ways that people experience and participate in stories as part of their daily lives.

But more conventional storytelling modes will be represented as well: guests can sign up to read aloud in shifts from Madeline L’Engle’s A Wrinkle in Time, or enjoy poetry performances by the UNC Wordsmiths. Students from the lab-affiliated “Graphic Asia,” a course on graphic novels, will deliver presentations, which include clips from a student-produced documentary film and two interactive comics.

There will be featured speakers and performers. Story Con kicks off at 8pm on Friday, April 20 with a keynote address from award-winning journalist and activist Mona Eltahawy, who will discuss the role of storytelling in activism. She'll be introduced by Duke's Laurent Dubois, Professor of Romance Studies and Director of the Forum for Scholars and Publics.

After the keynote, guests can grab a quick bite from an on-site food truck (starting 9:30pm) before checking out local artist (and occasional Poetry Fox) Chris Vitiello's reprisal of his 2017 ArtPrize installation "The Language Is Asleep," in which he accepts prompts from the public, writes improvised poems on dictionary pages, and hangs the pages on the walls, creating a temporary gallery.

There’s no rush, though—Vitiello will be at Story Con writing in dictionaries all night long. No rush on the food, either. Another truck—this one serving a mysterious delicacy called disco fries—will show up at 1:00 am to satisfy hunger pains for the late night crowd. 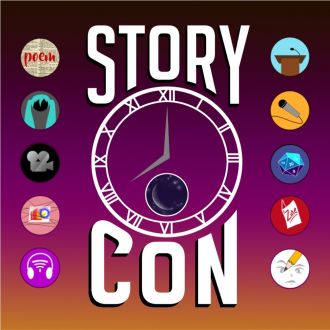