Controversies over ancient texts are a hot issue, such as the recent case of a University of Oxford papyrologist who allegedly sold stolen manuscripts to Hobby Lobby’s Museum of the Bible. Duke’s Manuscript Migration Lab is diving into these kinds of controversies with Duke’s own collection. “We're working on tracing the provenance of the manuscripts in the Rubenstein collection in all their complexity,” says Jennifer Knust, who started the Manuscript Migration Lab at the Franklin Humanities Institute in Fall 2020, along with Lab co-directors J. Andrew Armacost and William A. Johnson.

The Lab is an interdisciplinary hub where scholars and students explore the complicated record of ownership of the rare books and manuscripts in Duke’s collection. Knust says the Lab aims “to engage the political, ethical, and cultural concerns that they embody in the history of their journey from wherever they were originally to however they got to Duke.”

Dr. Knust does not shy away from complex controversies. As a professor in Duke’s Religious Studies Department who specializes in early Christian history and the religions of the ancient Mediterranean, she has written books that focus on discourses of gender and sexuality in early Christian texts, such as Unprotected Texts: The Bible’s Surprising Contradictions about Sex and Desire. Her curiosity about controversial issues continues in the Lab's investigations of manuscript provenance: “as a way of really acknowledging the global nature of our collections, and also to acknowledge the entanglements of that collection with both great moments in human history where people have exchanged gifts and made friends and found common ground, and also sometimes more difficult dispossessions of people from objects that they highly valued. Our sense is that, for this collection, that story has yet to be told.”

Grappling with the Provenance History of Duke’s Papyri Collection

The Manuscript Migration Lab is supporting many different projects with scholars and students. Some of the Lab's members have been working on Duke’s collection of ancient papyri (a thick paper-like material that was used as a writing surface). They have uncovered “fascinating procedures and processes around the circulation of ancient papyri among libraries and also magnates,” says Knust, while they are also studying “the kind of cultural values that were invested in those objects and how they've come to market.”

One example of these investigations is Postdoctoral Associate Nicholas Wagner’s research on William H. Willis’s papyri collection. Willis was a faculty member in the Department of Classics, who died in 2001, and who “was responsible for purchasing, on Duke’s behalf, almost all of Duke’s papyri (about 1500),” says Wagner.

A key challenge that Wagner notes in tracing the provenance of Willis’s manuscripts is that the Lab does not have Willis’s complete records, just “a lot of the correspondence that he sent to other people,” and thus they have the problem of “filling in the holes, because the archival documents, the records that help us reconstruct these events, are always partial.” Further complicating matters, “whoever the writer or receiver is, they have their own biases, and it’s really difficult to verify what people are saying.” The challenge of verifying the documents “creates a bunch of other problems, including legal, ethical problems.”

The Lab's mission takes on the many “cloaking mechanisms” that have obscured the manuscripts’ provenance history, including: “​​cycles of possession and dispossession wrought by imperialism, nation-building, and war,” market systems that have concealed “the ways that precious cultural artifacts are circulated and acquired,” and scholars’ own vocabulary and classification systems for describing these manuscripts that have included colonial and “Orientalizing assumptions about who owns what, where, and why.”

The Lab members aim to resist these “cloaking mechanisms” through research that reveals the manuscripts’ journeys into Duke’s collection. To make this research useful for society, the Lab is committed to communicating it in transparent and broadly accessible ways. Thereby, they hope to enhance “the democratic processes that inform how we define, articulate, and describe our shared pasts.”

The Invisible Lives of Ethiopic Manuscripts

Intertwined with research on the manuscripts’ journeys into Duke’s collections, Lab members are also taking on exciting investigations of the manuscripts’ contents. In its second year (2021-22), the Lab welcomes a new member, Humanities Unbounded Visiting Faculty Fellow Gay Byron, a professor of New Testament and Early Christianity from Howard University School of Divinity. Dr. Byron’s project, titled “The Invisible Lives of Ethiopic (Ge`ez) Manuscripts,” is engaging with manuscripts in Duke’s collection that are part of a tradition that has been treated as if it were invisible.

From Dr. Byron’s perspective as a New Testament scholar, she says that when she is “teaching and sharing information about Christian origins, early Christianity even until late antiquity, everything is framed pretty much around the Roman Empire, and the Roman Empire was not the only empire in the ancient world.” She continues, “There was also the Aksumite Empire and these Ge`ez manuscripts provide us information about the Kingdom of Aksum.” By focusing on the 112 Ethiopic (Ge`ez) manuscripts in Duke’s collection, she says that she is “trying to bring this tradition to light, to put a lens on what has always been here.”

Part of what interests Dr. Byron so much in Duke’s collection of Ge`ez manuscripts is its diversity. She notes that there are “all types of genres represented, biblical manuscripts, hymns, theological treatises, patristic documents, and other sources that highlight all kinds of ways that the early Christians were engaged in religious activities.” The diversity of these manuscripts is also interesting from a feminist perspective. “There are also a number of prayer scrolls in this collection - these religious scrolls sometimes they’re referred to as magic scrolls,” Byron shares. “When we look at these prayer scrolls, we can see more about the everyday lives of the Ethiopians, and particularly the Ethiopian women. Some of these prayer scrolls talk about the types of illnesses, the types of concerns, and the types of conditions that Ethiopian women were dealing with.”

Dr. Byron is excited to explore these often-ignored women’s experiences as evidenced in the scrolls: “There’s a lot about babies and how to protect your children from Satan and all of the evil influences in the world. There are a lot of scrolls about bleeding, in particular vaginal bleeding or hemorrhaging. With the exception of a few biblical passages such as Mark 5: 25-34, we normally don't find this type of material in biblical and extra-biblical sources. So I'm interested in learning more about prayer practices and determining if there's any way I can bring to light more of the issues that women were facing in their everyday lives.”

In Byron’s previous work with a similar collection of Ge`ez manuscripts at Howard University, she had been involved with tracing their provenance history. This work led to the return of one of the manuscripts to its rightful owner, the Debre Libanos Monastery. Philip Kurian described this process as a “landmark repatriation” to “combat empire’s blinkered history.” According to Byron, “there was one specific manuscript that we could trace back to Debre Libanos, one of the major monasteries in Ethiopia. We went through all the necessary protocols, legal and ethical, over a long period of time and, eventually, we were able to return that specific manuscript.” When asked whether such a return of manuscripts could be a possibility for Duke’s collection, Byron responded that “there is no clear trail back to where exactly these manuscripts belong in Ethiopia,” but this is a question that interests her in her work with the Lab.

What’s Happening in the Lab

To take on these questions in practice, the Lab's members have been collaborating on research as well as holding events and workshops. Public events have included a presentation by Dr. Byron on the Ethiopic (Ge`ez) manuscripts, a presentation about the Willis Papyri, a talk with Dr. Timothy L. Stinson (NC State) titled “Of Peptides and Scribes: Applying Life Sciences to the Study of Manuscripts,” a talk with Dr. Astrid Swenson (Bath Spa University) and Dr. Felwine Sarr (Duke) titled “Preservation, Restitution, and the Idea of ‘Cultural Heritage,” and a discussion on “Cultural Heritage: Ethical and Legal Issues,” featuring Patty Gerstenblith (DePaul College of Law), András Riedlmayer (Harvard University), and Heghnar Watenpaugh (UC Davis). The Lab has also held Digital Humanities workshops on techniques for analyzing manuscripts, organizing archival documents, and mapping relations among authors and documents.

Through educational events, public engagement, and research, the Lab is enabling students to be part of much bigger conversations happening now. Beyond the events, there are many opportunities for students to be involved in the Lab as researchers. Dr. Knust notes that “the student affiliates from last year just really did incredible work, especially in the first year in the middle of a pandemic, when the Rubenstein Library was barely accessible, and uncovered so much information about our collections and came up with really startling results, it seems to me, about the kinds of stories that our manuscripts cross in terms of the kind of human dramas that are carried in those objects.” (See virtual presentations of the students’ research here.) Looking ahead to the future of the lab, Knust is excited for more students to participate, as “we could not do this work without the students and they're really driving the research. We're just excited to involve more and more over the course of the lab.”

For more information on the Lab's events and projects, you can check out the Lab's website, particularly to read about the Lab's members, student opportunities, subscribe to their announcement listserv, and follow the Lab on Twitter. 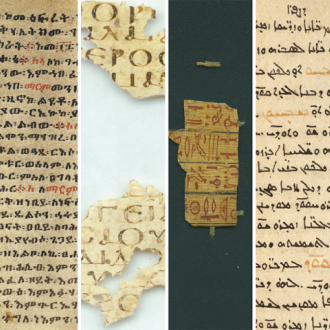