In the last two decades, socially engaged art has entered the life of museums, universities, corporations, and even governments. Described as participatory art, relational aesthetics, and social practice, to name a few, the variety of terms and definitions for the phenomenon is as rich as its prolific and at times contradictory manifestations. Early champions like Tom Finkelpearl, Anne Pasternak, or Nicholas Bourriaud now hold top positions in official institutions.

While this is all cause for celebration, the mainstream embrace of these practices is rarely accompanied by a deeper understanding of their history, or an appreciation for the complexity of their methods. Universities are best equipped to provide a remedy by strengthening the impact and scope of social art with the rigorous structures so characteristic of the sciences and humanities at research institutions. Socially engaged art, on the other hand, may provide more traditional academic disciplines in those very institutions with fresh and unexpected approaches to interdisciplinary work and collaboration, a higher degree of public engagement, as well as deeper student involvement through a full range of knowledge production that intentionally balances intellectual, cognitive, and affective dimensions.

Ultimately, the promotion of social art practice and its integration to the university is only the first step towards the more relevant goal of reevaluating the notion of ‘arts and sciences’ and also creating a more socially engaged humanities. Regardless of any existing connection to art, social practice may in fact be restored to its rightful place as a core mechanism of intellectual life, extending far outside the art gallery, the university classroom, or the research lab. By its very name, the Social Practice Lab thus resists and complements traditions that see individualist introspection as the main access to scientific and artistic discovery. We will attempt to know the world through each other and each other through the world, even as others still prefer to know themselves. 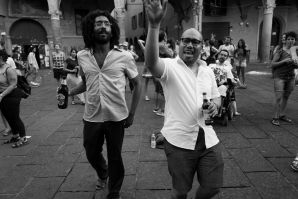 Visit the Lab Website (opens in a new window)

Award Winning MOOC: Pedro Lasch and Art of the...

In summer 2017, the Social Practice Lab traveled to the Summer School of... read more » about Polit(t)ico: Interventions for Bologna, Summer 2017

END_OF_DOCUMENT_TOKEN_TO_BE_REPLACED

Ruangrupa (Artists at Sao Paolo & Other...