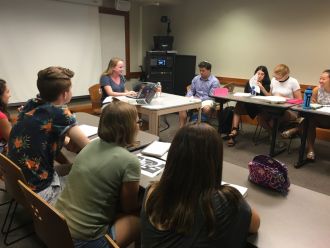 The Franklin Humanities Institute is pleased to announce the launch of a new humanities laboratory, Social Movements, beginning Fall 2017. Co-directed by Michael Hardt (Duke University) and Sandro Mezzadra (University of Bologna), the lab has two central premises. One, it will approach its analysis of movements by avoiding a theory/practice divide: a large portion of social movements are animated by activist-scholars who theorize the work of movements, inside and outside of universities, even as they take part in them. Two, social movements are more powerful when they are intersectional and international; the lab will work to reveal and create connections between movements in different social domains and national spaces.

In collaboration with departments, the lab will be a hub for campus events organized to understand various social movements in progress and in relation to each other, connecting students, faculty, and Duke departments, centers, and institutes in the humanities and social sciences. Affiliated with the Academy for Global Humanities and Critical Theory, a joint project of Duke University, the University of Virginia, and the University of Bologna, the lab will also draw students and faculty from these partnering institutions. Projects will extend beyond campus to engage activists in discussion through videoconferencing and visits to Duke’s campus.

The lab plans to recruit students presently engaged in activism, and partner with self-organized undergraduate and graduate student groups.