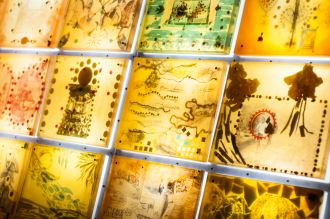 Detail of Haiti: History Embedded in Amber, a collaborative project produced at the Haiti Lab during the 2010-2011 year, led by renowned artist Edouard Duval-Carrié and now on permanent display at the Franklin Humanities Institute.

As part of its core commitment to support interdisciplinary humanities research at Duke University, the Franklin Humanities Institute will introduce two new humanities labs– the Amazon Lab and the Manuscript Migration Lab – in Fall 2020.* The Office of Global Affairs will contribute funding for the Manuscript Migration Lab from the Mellon Global Studies Endowment, and will fully fund the Amazon Humanities Lab from the Hanscom Endowment.

Both of these humanities labs situate their primary research inquiries within a global context. “Often when we’re thinking about global challenges, we think about problems like COVID-19 or climate change,” said Eve Duffy, Associate Vice Provost for Global Affairs. “But it’s important that we include the humanities in framing these problems. We need to both understand the distinctiveness of the cultures we’re addressing, and how our own politics, history, economy and other associations end up influencing our thinking."

The Amazon Lab will engage in a set of projects that foreground the region’s remarkable heterogeneity. Creating a new paradigm for the study of the Amazon within the interdisciplinary field of the environmental humanities, incorporating a number of humanistic and scientific disciplines as well as indigenous modes of knowledge, the lab will develop a workshop and film series and an interdisciplinary Amazon seminar at Duke University, as well as a Virtual Amazon Network across the United States, South America, and the Amazon region. Its co-directors are: Gustavo Furtado, Associate Professor of Romance Studies; Christine Folch, Assistant Professor of Cultural Anthropology; Paul Baker, Professor of Earth and Ocean Sciences; and affiliate Michael Heckenberger, Professor of Anthropology at the University of Florida, who has worked extensively with the Kuikuro people of the Mato Grosso region.

“The Amazon has been a place of fascination for the Western imagination for centuries, and yet it’s a widely misunderstood and misrepresented place,” said Gustavo Furtado. “It’s hard to describe a place with that level of cultural and biological diversity, and over such a vast territory. It’s crucial that we understand it in the best possible way in order to have the chance to fight for it.”

The co-directors remarked on the importance of an interdisciplinary lab structure in examining this vast and complex region. According to Christine Folch, this approach “sets a table for us to have these deep conversations in different disciplines about the Amazon. It demands that because of its scale in so many ways. It requires conversations that take seriously the knowledge of indigenous communities, the biota, presentations in 17th century travel logs…there is no better way to study it than a lab.”

Led by three co-directors - Head of Collection Development and Curator of Collections J. Andrew Armacost, Professor of Classical Studies William Johnson, and Professor of Religious Studies Jennifer Knust - the Manuscript Migration Lab will examine the history of manuscripts held by the David M. Rubenstein Rare Book & Manuscript Library. The lab will explore research methodologies that relate to historical ownership and its documentation. It will consider ethical, legal, and political dimensions of cultural heritage as it is situated within global markets, networks, and political systems, and shaped by colonial, imperialistic, and national ideologies.

Knust said that the lab would examine manuscripts as artifacts with multiple historical and cultural engagements. “Looking at not only when they were first copied, but also the different stages that brought them to Duke allows us to think in creative ways about how humans form and sever connections, like war and colonial occupation, but also gift exchanges and happenstance.”

The lab will track not only the transmission history of manuscripts but also address the ethical questions bound up in these movements. “There’s been a lot of really important work on what to do with cultural artifacts after the history of colonial and postcolonial occupations,” said Knust. “Less work has been done on manuscripts. But we are aware that our manuscripts are cultural objects, cultural heritage, and we have a responsibility to think through these ethical questions.”

“It’s an interrogation of how ideas of right and wrong mutate over time,” said William Johnson. “They often do so around things that we think of as neutral.”

The directors pointed out that a lab structure was essential to pulling together the multiple strands of expertise  – humanistic, legal, and linguistic –  that are necessary to take on these questions. The lab plans to involve undergraduate and graduate students in its projects, as well as Duke-affiliated researchers and international collaborators.

“We’ll have some physical space [at the library] once the pandemic is behind us and we can get together,” said Johnson, “but we’ll also be working with people around the world. That notion of a laboratory is quite metaphorical. The kinds of information we’re after, the expertise we need, is globally distributed.”

Franklin Humanities Institute Director Ranjana Khanna remarked while both labs address their subjects in relation to specific, even urgent geopolitic moments, they frame their thinking within much broader contexts. “I think that there are questions that come up in times of emergency, like within this particular historical conjuncture, that allow us to understand the ethics of manuscript migration, or the threats to species and the environment and the diversity of the planet,” she said. “But [it also affirms] the value of humanistic scholarship, in that it doesn’t only respond to that emergency situation and crisis but also its longer history, which you in fact need to understand the emergency.”

Humanities labs are multi-year collaborations that allow faculty from different disciplines to work with students and other partners on a related set of research topics, courses, and projects, usually with a dedicated shared space. The Franklin Humanities Institute first piloted the humanities lab model with the Haiti Lab in 2010-2013. Since then, humanities labs have proliferated at Duke University, both at the FHI and in other units, including several humanities departments as part of the Mellon Foundation-funded Humanities Unbounded initiative.

In addition to these two new labs and several ongoing labs, the FHI will also provide some support for the new Laboratory for Social Choreography at the Kenan Institute for Ethics. Some of this lab’s projects were previously incubated through the FHI’s Social Movements Lab.

*Due to restrictions related to COVID-19 that would impede its planned activities for the 2020-2021 academic year, the Amazon Lab plans to officially launch in June 2021.