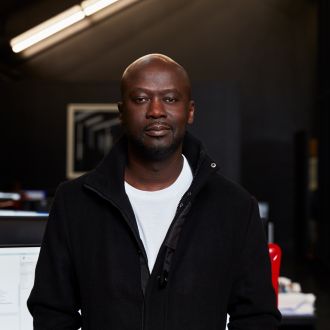 Visionary architect Sir David Adjaye OBE, the lead designer on the architectural team that worked on the Smithsonian National Museum of African American History and Culture, will deliver the annual John Hope Franklin Lecture at the Nasher Museum of Art on Thursday, September 12, 2019.

“We’re very pleased that Sir David Adjaye will join us as our Franklin Lecturer,” said Franklin Humanities Institute Director Ranjana Khanna. “His approach to architecture, which takes into account the history, arts, and cultures embedded within specific sites as well as their global connections, obviously fits the type of historical thinking that John Hope Franklin did. It also exemplifies the theme we’ve chosen for the next two years, World Arts, and we have asked him to speak about architecture as a world art.”

The Tanzanian-born son of Ghanaian parents, Adjaye lived in a number of countries in Africa and the Middle East during his childhood due to his father’s diplomatic career. Eventually, his family settled in London, where he studied architecture and opened his first office in 1994. He reformed his studio as Adjaye Associates in 2000. The firm now has offices in London, New York and Accra with projects in the United States, United Kingdom, Europe, Africa, Asia and the Middle East.

Adjaye’s prominent projects include the Idea Stores in London (2005), which were credited with pioneering a new approach to library services, the Moscow School of Management SKOLKOVO (2010), the Sugar Hill mixed-use social housing scheme in Harlem, New York (2015), and the Aishti Foundation retail and art complex in Beirut (2015).

Regarding his approach to projects such as the Sugar Hill development, Adjaye has cited what he calls the “social responsibility of architecture” to create accessible and democratizing spaces. His designs respond not only to physical environments but also the culture and memory of places, even as they anticipate the types of future transformations inherent to cityscapes. Critics have praised his inventive use of materials, sculptural elements, and light.

In 2009, Adjaye was lead designer on the architectural team that won the international design competition for the Smithsonian National Museum for African American History and Culture, along with the Durham-based lead architect, the late Philip Freelon. The museum opened on the National Mall in Washington DC in 2016 to wide acclaim.

Among its many remarkable aspects, the museum features a three-tiered exterior, inspired by Yoruban caryatids (wooden crowned figures, a traditional feature of West African architecture). It is paneled with a bronze lattice that incorporates wrought-iron designs created by free black ironworkers in New Orleans, Charleston, and Savannah before the American Civil War.

Adjaye also collaborates frequently with contemporary artists on installations and exhibitions (most notably, the 56th Venice Art Biennale with curator Okwui Enwezor in 2015). He participates in lectures, symposia, publishing and other public projects, and maintains research and theoretical investigation at the core of his practice.

In 2017, Adjaye was knighted by Her Majesty the Queen Elizabeth II for services to Architecture, following the previous award of an OBE in 2007.

On the selection of Adjaye to speak to the theme of World Arts, Ranjana Khanna said, “The proliferation of events in the arts with worldwide reach, such as literary and music festivals, and art and architecture biennials, make this an important moment to think about how the arts are being presented in global terms. But we also want to foreground how a world conceived within a work of art does not merely represent something that already exists, but imagines and builds a future. Architecture, of course, does that literally.”

Sir David Adjaye OBE will deliver the John Hope Franklin Lecture at 5:30pm on Thursday, September 12, 2019 at the Nasher Museum of Art. A reception will follow the lecture. This event is co-sponsored by the Department of African & African American Studies and the Department of Art, Art History & Visual Studies.