Exhibit on Walt Whitman and celebrity created by Story+ team 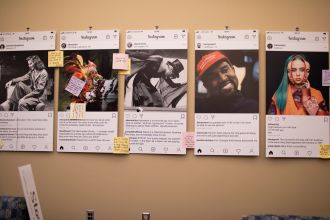 The "Stories We Sell" exhibit in the midst of its installation in Perkins Library. Photo by Nonnie Egbuna.

As part of an investigation into the history of American celebrity, a team of undergraduate students created an exhibit, Stories We Sell: Crafting Public Persona from Walt Whitman to Billie Eilish, now on view in Perkins Library. Merrit Jones (‘21), Tristan Kelleher (T ‘22) and Andrew Witte (T ‘22) worked together during Story+, a 6-week humanities research program in which undergraduate students complete a project under the guidance of a sponsor and a graduate student mentor.

Led by faculty advisor Dr. Aaron Dinin and guided by graduate student mentor Meredith Graham, the project began with the collection of Walt Whitman's letters, notes, and publications archived in the Rubenstein Rare Book & Manuscript Library. Though Whitman, a New England poet best known for Leaves of Grass, is a canonized figure in the world of American literature, the “Stories We Sell” exhibit re-considers how his poetic influence came to be.

Whitman’s letters and notes reveal his personal endeavors to market himself for broad public consumption and promote a specific image of himself among his audience. In their curatorial statement, the team writes:

Formulaic poetry, ambitious publishing efforts, and a sphere of professional collaborators reveal Whitman’s celebrity to be an intricate business venture with a fabricated caricature at the center.

Finding echoes of Whitman’s approach to self-promotion in contemporary figures, the team extended their analysis to include other celebrity artists, including Salvador Dali, Audrey Hepburn, and Kanye West. The exhibit presents information on core facets of celebrity – personal brand, critical acclaim, politics, and gender & sexuality – in the style of Instagram posts, with captions lifted from the artist’s interviews and comments from their friends and contemporaries. Ultimately, the project seeks to clarify the concept of a “public persona,” challenging the perceived authenticity of certain actors, musicians, and painters.

“Stories We Sell: Crafting Public Persona from Walt Whitman to Billie Eilish” will be on display in Perkins Library until November 30, 2019. Beginning in December, the exhibit will join the permanent collection at the Duke Innovation and Entrepreneurship Bullpen.

Update (11/25/19): due to positive reception, the exhibit has been extended by Perkins Library until January 2020.