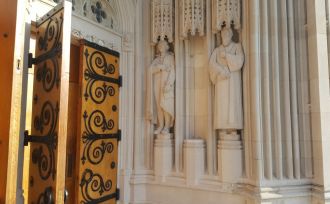 What is a monument? What have been and remain the local, regional, and international debates around monuments? What can we take from the fact that in the same year the Confederate flag was removed from the State House grounds of South Carolina, the bronze statue of Cecil Rhodes was removed from the grounds of the University of Cape Town, South Africa’s oldest university, and also the 112-year-old statue of Queen Victoria that stands outside the city library in Port Elizabeth was vandalized? In addition, in January 2017 a statue of György Lukács, Hungarian Marxist philosopher, aesthetician, literary historian, and critic was removed from its site in Budapest. And in the 1990s filmmakers and philosophers were examining how to deal with the massive and numerous statues of Lenin and Stalin in Russia, while monuments to the fortitude of Nelson Mandela were going up everywhere. Is the museum or the graveyard the appropriate site for disgraced monuments? And how do we understand monuments in relation to both aspiration and built environment?

In the middle of last century, architectural historian Sigfried Giedeon and architect Joseph Lluis Sert wrote a document entitled “Nine Points on Monumentality” (1943).  In that document, they bemoaned the trivialization of monumentality in architecture over the preceding hundred years. They looked forward to a renewed investment in the true significance of the monumental, proposing it as a concept rather than as a series of structures that were inadequate to that concept. “Monuments are human landmarks which men have created as symbols for their ideals, for their aims, and for their actions. They are intended to outlive the period which originated them, and constitute a heritage for future generations. As such, they form a link between the past and the future.” And they continue in ways that further elaborate on the desire and affective investment in the monument: “Monuments are the expression of man's highest cultural needs. They have to satisfy the eternal demand of the people for translation of their collective force into symbols. The most vital monuments are those which express the feeling and thinking of this collective force—the people.” The history of monuments is the history of “an age-old struggle over the memorialization of the past and its imbrication in a deep and often unnamed politics of collective memory” (Mitchell 442).

The monument, then, is not just a representation, but also an embodiment of desire and aspiration of “the people.” Monuments mark a people’s ambitions, triumphs and tragedies. And yet, as we know, the people have not always been unified, nor have they had a common desire for commemoration or agreed about which ideals or aims should be memorialized. In addition, the state’s role in creating and destroying monuments, sometimes in ignorance of and sometimes in support of the desires of their “people” has not been consistent. The erection of monuments to the Confederate cause and the state of racial prohibition that followed was, historian David Blight writes, one of “the most highly orchestrated grassroots partisan histories ever conceived.”

We also have monuments that have been disgraced, or are seen as a disgrace. After World War II, the Allied Control Authority Coordinating Committee issued the “Legislation Dealing with the Liquidation of German Military and Nazi Memorials and Museums,” what was referred to as Directive 30.  This was designed to “completely destroy and liquidate” all traces of Nazi monuments. In the US today, local governments, universities, and individual citizens acting without the imprimatur of the state have taken steps similarly to destroy, deface, and remove monuments seen as a disgrace. The movement asserts that even where they forgotten, silent, or “invisible” on the landscape to the everyday eye, monuments assert authority about what and who deserves remembering and what should be forgotten and erased.

Today, we also have numerous structures internationally that we refer to as anti-monuments or counter-monuments—structures or structured orifices that encapsulate the desire to make some forms of representation absent.  For some, the idea of acknowledging the necessity for amnesia about divisions in society is the only way to maintain political community—for Ernest Renan, this remembering to forget was the foundation of the modern nation-state.  For Nicole Loraux, the necessary amnesia concerning the divided city of ancient Athens (divided between free men on the one hand and women and slaves on the other) was constitutive of a notion of the political.  Both presence and absence, in memory and in memorialization, were foregrounded. In the words of artist Rafael Lozano-Hemmer, anti-monument refers to “an action, a performance, which clearly rejects the notion of a monument developed from an elitist point of view as an emblem of power."

This series of events will explore the concept of Monument through considerations of monuments.  And it will begin and end very locally so as to underscore how we might journey through a concept in a way that deepens our understanding of what some would consider a local disgrace.  Our president, Vince Price, has indeed performed an act of the counter-monumental in creating a space where a disgraced figure once stood.  That space becomes the occasion for understanding why a monument was created, what the context of that was, and how we are to understand its history in relation to the university itself, and what monument is.