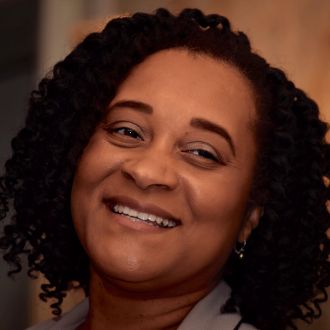 Pamela Montgomery smiles as she receives her Cook Society Award on February 19, 2019.

Pamela Montgomery, Assistant Director for Finance and Administration at the Franklin Humanities Institute, will be one of the honorees at the annual Samuel DuBois Cook Society Dinner on Tuesday, February 19, 2019. Named after the late Dr. Samuel DuBois Cook, the first tenure-track African American faculty member appointed by Duke University, the society “seeks to recognize members of the Duke Community who reflect in their work or in their academic pursuits, the objectives to which Dr. Cook dedicated his professional life -- social justice, mentoring, the University’s relationship to the black community, and his vision of the ‘beloved community,’ seeking to improve relations among persons of all backgrounds.”

Dr. David Malone, Director of Undergraduate Studies in the Program in Education, nominated his former colleague for the award. He describes Montgomery as “one of Duke’s strongest advocates for creating and sustaining an equitable, just, and inclusive campus environment for students, staff, and faculty.”

As Assistant Director for Finance and Administration, Montgomery has extensive responsibilities at the Franklin Humanities Institute: she manages the institute’s finances, constructs and oversees budgets, manages grants, serves as the HR administrator, and supervises facilities and IT administration.

“Pam holds the FHI together,” said FHI Director Ranjana Khanna. “Lots of people are good at their jobs, but she is exceptional because on top of her many duties as Assistant Director, she is a people person. She is always warm and attentive to everyone, and creates a lovely environment to work in.”

Prior to joining FHI, Montgomery worked as Education and Training Coordinator at Research Costing Compliance, as Financial Manager at Duke’s Nicholas School of the Environment, as Grants Manager in the Divisions of Hematology and Oncology, and Business Manager in the Program in Education at Duke University.

Crediting her sorority Alpha Kappa Alpha for motivating her to begin her community service career as a college student, Montgomery has since volunteered extensively with organizations such as United Way, Big Brothers Big Sisters, and Urban Ministries of Durham.

Reflecting on her career path, Montgomery cites the influence of other women in prominent leadership positions at Duke University, such as Dean Caroline L. Lattimore and Dean Martina J. Bryant (both of whom are members of the same AKA chapter as Montgomery) and former Vice President for Institutional Equity Dr. Myrna Adams. Other influences include David Malone, Dr. John Hope Franklin, and Samuel DuBois Cook himself, all of whom she and her husband Kirk Montgomery met through her membership in the Samuel DuBois Cook Society.

“When I first came to Duke, I felt like a little fish in a big pond, and the Samuel DuBois Cook Society was the first group that invited me to be a part of them,” Montgomery said. Meeting and getting to know “giants at Duke” not only taught Montgomery about the university, but about herself and her own potential: “Being around them made me feel like I could be important and I could make a difference.”

Given her long history as a member of the society, how does it feel to receive a Samuel DuBois Cook Society Award after twenty years of service at Duke, while serving in a leadership role at an institute named after John Hope Franklin?

“It does feel overwhelmingly great,” Montgomery said with a smile.