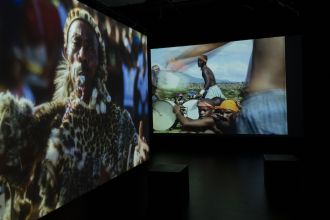 Dust of the Zulu, on view at the Rubenstein Arts Center from March 18 – April 15, 2019, is billed as “an immersive installation incorporating sound, photography, and video [that] brings twenty-five years of award-winning ethnomusicological fieldwork in South Africa to life.” But before it was transformed into an exhibition, this ethnographic examination of ngoma, a form of migrant Zulu men’s singing and dancing, was an academic book, Dust of the Zulu: Ngoma Aesthetics After Apartheid (Duke University Press, 2017). Its author, Duke University Associate Professor of Music Louise Meintjes, received a Franklin Humanities Institute Book Manuscript Workshop Award to revise the book draft during the 2012-2013 academic year.

In this conversation, Dr. Meintjes traces the project’s collaborative history from her fieldwork in South Africa to its “remix” into a multimedia installation, remarking on the new opportunities for anthropologists to embrace multi-modal ethnographies and work with artists in the digital age. This interview has been edited and condensed.

How did the FHI Book Manuscript Workshop impact your project?

First of all, the workshop group helped me to crystallize what the key features of the book were at just the right moment. The participants also helped me to see what was missing and endorsed my way of writing experimentally. I use multiple registers of writing in the book, shifting between evocative writing to terse, snapshot-style storytelling to analytical writing. With better clarity from the workshop, I was able to refine and discipline these registers during the revision process.

The book also shifts between writing and photographic media. Duke University Press was fabulous about the inclusion of TJ Lemon’s photographs, placing them in conversation with the text. Most of them are not illustrative; they offer another narrative register.

[Dust of the Zulu won two major awards in 2018, including the Bateson Prize, which honors “interdisciplinary, experimental, and innovative” work in Cultural Anthropology.]

Would you say that the interplay between writing and images in the book helped you to transform it into an exhibit later?

I was encouraged and inspired to do so from trying out the experimental style of writing and collaborating with the photographer. We wanted to represent what the book had to say in a visual public space, which traditionally is more of a photographer’s space, and ask, how do you remix the book for a different space and for a different kind of audience?

Can you say more about what you mean by “remix?”

From having worked previously in recording studios where artists create multiple versions of the same song, I’m thinking about how the exhibition is another version of the story of the book.

A key research component for music ethnographers involves gathering audio material, video, and photographs. I learnt a lot by recording in the field, and from reviewing and evaluating those recordings with ngoma dancers prior to writing. Though there’s always been visual anthropology, text has been the go-to place for ethnography.

In our current moment in anthropology, inspired by Sound Studies and work in digital media, there are more experimental openings. Lots of people are now thinking about how to do ethnography in other media, multi-modal ethnography. It was challenging to think, how do we take what we’d put in a book off of the page and into another arena?

What was it like to go from an individually authored book to collaborating with a team on a multimedia installation?

Well, ethnography is always collaborative; it starts from having relationships. You may be the one putting your fingers on the keys to write the book, but it was already a fundamentally collaborative project, writing and working with a photographer, and with ngoma singer-dancers.

Collaborating on this kind of installation was fantastic. Its conception was collaborative, too. How it happened was, I received some development seed funds from the Vice Provost for the Arts, Scott Lindroth. Last year, we did an exhibition with the photographic prints in the Jameson Gallery. We produced some discussion around it, did a couple of presentations, and the Department of Music held a colloquium. An undergraduate class used my field recordings to create exhibit soundtracks that you could listen to on your phone.

Scott Lindroth then prompted me to apply for funding to do something in the Ruby. But it was really two ethnomusicology graduate students, Jonathan Henderson and Cade Bourne, who made it happen, because they said, “We want to do this.” Between them, the funding, and, crucially, the really wonderful technical support from the Ruby, it came together.

Cade is an international DJ, and Jonathan is a music producer. They brought their sound design skills to my audio field recordings, which they edited into a twenty-minute loop and mixed to create 5.1 surround sound. Jonghwan Choi, an MFA|EDA student, produced a loop of moving slides of TJ’s images using the sound track as a guide, and with TJ’s feedback – we had the funding to bring him over, and it was great for the team to work with him. Bridgette Cyr is a professional filmmaker based in the Triangle. She took excerpts from my video recordings and made a twenty-minute video loop to go with the soundtrack, and with the slides and photographic prints. We had various versions that we cut up, mixed, matched, and changed. There’s only one moment where the soundtrack and video synch up completely, at the climax. We conceived of it that way: Jonathan and Cade left a gap in the draft version of the soundtrack, and then they mixed in the video sound at the climax once Bridgette had selected the video for that moment.

For me it was an absolute treat! They were all invested in their own artistry and in thinking about the book not just in words, but in the media in which they’re most versed.