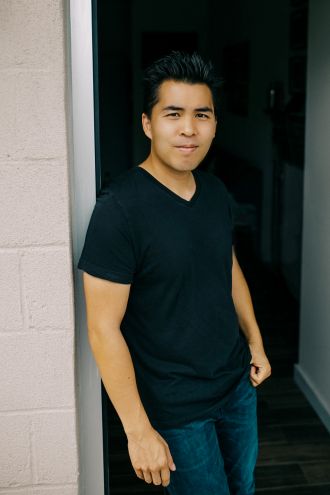 Barry Lam, Associate Professor of Philosophy at Vassar College, was a Humanities Writ Large Visiting Faculty Fellow during the 2016-2017 academic year. Splitting his time between the Department of Philosophy and the Story Lab at the Franklin Humanities Institute, he spent his year at Duke developing an unusual project - Hi-Phi Nation, a podcast dedicated to exploring philosophical questions through journalism and storytelling. Hi-Phi Nation eventually drew the attention of Slate, an online magazine and podcast network, which picked up the podcast for its third season.

“Barry Lam’s proposal for a Humanities Writ Large Visiting Faculty Fellowship was one of the most innovative and compelling projects that came to us– and that’s saying a lot, as the fellows were an amazing group of scholars and teachers doing fresh and exciting work,” said Laura Eastwood, who worked closely with the late Srinivas Aravamudan on the five-year initiative. “Barry is taking public-facing humanities to the most public-facing level.  He’s a pioneer and we were so fortunate to have Barry share his work with the Duke community.”

Barry Lam spoke to us recently about the role that Humanities Writ Large and the Franklin Humanities Institute played in the development of his podcast. This interview has been edited and condensed.

What gave you the idea to make a podcast about philosophy?

I noticed that there were similar kinds of things being done in public radio and podcasting around other areas that were academia-adjacent, like economics, brain science, and history. But it seemed like people were allergic to philosophy. This American Life did an episode on free will where they talked to physicists, authors – everyone but a philosopher! I wasn’t seeing coverage of big philosophical ideas in the space.

Why did you choose to come to Duke to pursue this project?

Humanities Writ Large offered fellowships for faculty from liberal arts colleges and HBCUs to pursue things they were interested in that were non-standard humanities projects - something other than writing a book.

At the time, people weren’t really funding this kind of thing. HWL at Duke was like an incubator for faculty to do things that were not usual faculty fare. Towards the end of HWL we had a conference that looked back on HWL projects, and almost everyone did a nonstandard thing, a web-based interactive project, a documentary film, etc. That’s the kind of thing that was happening through this fellowship at Duke. It was like a start-up for humanities people.

I sent the pilot episode to Carlos Rojas and Eileen Chow at Story Lab, and said, “This is what I want to do, story-based philosophy.” I finished the first season at Duke, and that’s what got it on Slate’s radar. On the basis of that, they became interested. I had a whole year as a fellow to make it. HWL, FHI, it was pivotal. It wouldn’t have happened otherwise.

What kind of support did Duke provide for the project?

As soon as I moved down there, I took an intensive course at the Center for Documentary Studies with John Biewen. He’s been really crucial to this day in helping to promote the show and providing moral support. He also has a lot of industry ties that I would have never had.

I gave a couple of talks at Story Lab, but I also got to go to talks where people were talking about particular kinds of narrative - hero journeys, end of the world narratives, and about the cognitive science of following riveting stories. I was still learning to produce, but the talks made me intellectualize and theorize why certain things are working, and what I’m trying to accomplish on an episode by episode basis. It influenced my day-to-day production.

What surprised you along the way?

Academics - my peers - are not as hostile or uninterested as I thought they would be. I thought I was doing it for a totally different audience, but there’s a lot of people who feel the way that I do in academia. The reception in my field has been positive.

I was not surprised that it was as much work as it is. It’s a LOT of work. A lot. I expected it to be very time-consuming and challenging. It was.

What are you looking forward to?

Working with Slate. I’m still making the show on my own, but they’re going to provide a lot of the business support, trying to make the show financially sustainable, promoting across different shows on their network. I just couldn’t do that by myself; I don’t have the time to promote it. I think the show can sustain a much larger audience than it has. They provide a bit of editorial assistance as well; they listen to drafts and comment on it. Doing it in my office in the attic at Vassar is a lonely endeavor, and you can’t make a podcast work with only one pair of ears.

I’m not sure where the show is going to go from there. It would be nice to find a way to sustain work like this at a university rather than having to sell ads for it.

Who should listen to it?

People who like learning. People who are in their job, in the day-to-day grind, and like engaging with deeper ideas and thinking about the ways they connect to the world.

Hi-Phi Nation’s third season debuts on Slate on January 31, 2019, and will run for ten episodes. Previous seasons of the show are available on multiple listening platforms such as iTunes and Spotify, and at hiphination.org.