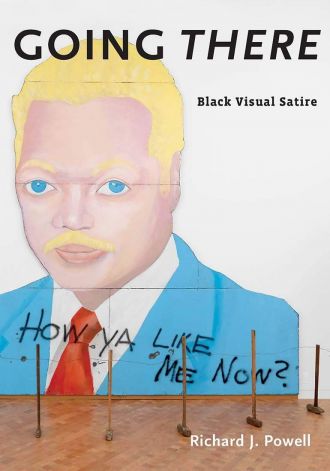 In a recent episode of the Yale University Press podcast, Jessica Holohan interviewed Richard J. Powell to discuss his new book, Going There: Black Visual Satire, a groundbreaking study of the visual forms of satire produced by Black artists in 20th- and 21st-century America. Richard J. Powell is John Spencer Bassett Professor of Art and Art History at Duke University and co-director of the From Slavery to Freedom Lab at the Franklin Humanities Institute.

Here are some highlights from their conversation.

Jessica Holohan: I'd like to start by asking you to talk a little bit about how Black visual satire both fits into and occupies a unique space within the long history of satire.

Richard J. Powell: Well, Jessica, that's actually an interesting question because, as your question suggests, Black visual satire does fit into the history of satire. And it also kind of has its own life.

I would best answer that question by saying that the focus of Going There is on modern and contemporary art works. In other words, works produced in the last twenty, thirty, forty years.

I argue in the book that these works, as well as works that were created just before—and I'm thinking about early to mid 20th-century masters like Archibald Motley, Palmer Hayden, and Oliver Harrington—can’t be understood without considering an even earlier history. And that's from canonical works by people like Hogarth, Goya, and Daumier, to African American blackface minstrels of the 1870s and afterwards.

So this book really attempts to take in a very, very broad history of visual satire, how we think about visual satire in relationship to African Americans, and to something that we might call Black visual satire.

RP: There are three elements that I’d argue really make it possible to even think about Black visual satire. The first element has to do with who the satirist is. Clearly, the artist is intrinsic to facilitating the artwork’s meaning, and more importantly, one has to be aware of who the artist is. Being a Black artist really places the satire in total context, and I'll talk about context in a few minutes.

The other element has to do with the object or target of derision. And in many instances this is the status quo, institutions, overarching systems, and we can include within those institutions systemic racism, which can be and frequently is a target of critique by Black visual satirists. And then finally, people whose moral shortcomings or perceived crimes against humanity or society merit calling out and censuring.

And then finally, I think the other key element that really makes all of this come together has to do with audiences, the consumers, the recipients of the satire and their ability to understand, appreciate, and process what's coming to them. Satire is not something that is on the surface what it seems to be, but actually has layers of meaning and significance.

JH: One of the most complicated genres you discuss is minstrelsy and the deployment of blackface or whiteface. What are the things that make this in particular so complicated?

RP: I devote a whole chapter to minstrelsy because it really requires verbiage, histories, and narratives to unpack and make sense of it.

And part of the complication here—and we haven't quite talked about this—is that so many people often confuse stereotypes with satire, and that's something that I go to great lengths to try to unpack and take apart.

Minstrelsy does traffic in stereotypes. There's no question about it. When we think about Dan Rice in the 1830s, you know, putting black paint on his face and pretending or acting out in a way that evokes Black bodies and Black movements. It was derisive and it was racist and it was extremely popular. It was so popular that within several decades minstrelsy became something that people are doing the world over.

But it's even more complicated than that, Jessica, because we can go back to the 17th century, the 18th century in Europe, where there is what we call the commedia dell'arte: these routine performances that were done, you know, in villages all throughout Europe, that have these Black characters like Harlequin and these white characters like Pierrot. And they play out certain kinds of broad characterizations of people in classes and in various hierarchies of society.

I'm giving you all that background because when we get to the 20th century, we begin to see how embedded this culture and minstrelsy is in American life, whether it's in advertisements—Aunt Jemima, Uncle Ben—or whether it's in movies like Gone with the Wind.

Again, I know I've given you multiple layers here, but that's kind of what we're working with—so much so, by the time we get to the 1960s and 1970s, we find a whole set of artists who are utilizing the trappings of minstrelsy, and using them in order to critique racism, to critique the stereotype.

JH: Let’s pick up one of those examples you mentioned, and that is the Aunt Jemima image, which wound up in the news this summer when Quaker Oats officially retired that image from their packaging and their marketing. You actually had an op-ed piece in the LA Times in early summer about that, in particular, and fans of Saturday Night Live may know that just this past weekend, there was a skit in which Maya Rudolph plays Aunt Jemima and is objecting to being fired.

So what is the potency of the Aunt Jemima image, and what are the ways that she has been used in artworks over the decades?

RP: Well, first of all, I have to say that in my editorial I say that she has been retired, but she's still here. And she's still here because of the timeframe that I just described to you. These are tropes that have been deeply incorporated into the American psyche, you know, especially since the late 19th-century. So, you can imagine something that core to Americans’ concepts of self is going to be hard to eradicate.

What I do in the book is I talk about how again, artists utilize this icon or this trope, and they find really, really creative ways of flipping it. And I'm thinking about artists in particular like Betye Saar, a really important collage artist based in Los Angeles, who does The Liberation of Aunt Jemima, which shows one of these stereotypical cookie jars, and she incorporates into her little collage all sorts of elements that deal with Black Power, that deal with the liberation of Black people in this kind of turbulent moment of the late 1960s.

I like how Lucy Lippard describes Aunt Jemima as having almost a homeopathic quality, of taking this negative image and turning it around, and making it into something that might potentially be restorative.

I mentioned Betye Saar, but there's literally a litany of artists, in particular at the beginning of the 1960s, but going all the way up to even an artist like Kara Walker. I'm thinking about her piece A Subtlety, which she did in 2014 in the Domino Sugar factory building that was about to be demolished in Brooklyn. She does this huge Aunt Jemima sphinx made out of sugar and it became the event of the art world in the summer of 2014.

As I said in my editorial, “I’s in town, honey” is the quotation from the advertisement, and it really resonates, because this is an image that for all of its negativity has functioned, for many artists, as an antidote against racism.

JH: You had really interesting things to say about Kara Walker's Aunt Jemima sphinx. Can you describe the piece a little bit more and share your thoughts on it?

RP: Yes. Well, first of all, it was incredibly big, and it filled the interior of the main space of this Domino Sugar factory. It embraces the shape of a sphinx, this kind of half-kneeling, half-reposed figure, except that in this case, it’s clearly an image of Aunt Jemima, with the bandana and a kind of strange expression on her face. And what was also interesting is that she surrounded it with these little figures that were made out of kind of a brown sugar molasses version of sugar. They were these stereotypical images that one might find in shops that refer to plantation workers, little Black boys carrying bananas, little Black boys, you know, carrying baskets on their heads. And of course, the title of the piece is the ultimate surreal title:

or the Marvelous Sugar Baby

An Homage to the unpaid and overworked Artisans who have refined our Sweet tastes from the cane fields to the Kitchens of the New World on the Occasion of the demolition of the Domino Sugar Refining Plant.

I argue that this is a piece that perhaps nods towards an inglorious history of sugar in the New World. But I also think it's a piece that is a critique of her censors because Kara Walker is an artist who has faced and confronted, ever since she emerged in the art world in the 1990s, all sorts of people who have questioned her work, who feel confused by her work, who challenge her imagery, because her artwork is satirical and has all of these incredibly complicated layers.

Her work in particular gets at a tension between two related ideas that we mentioned a little bit ago, that is satire and stereotype. And I think it's easy to think about satirical works as turning primarily on stereotype, but they are distinct.

Listen to the full podcast to hear more about why an audience might struggle to understand a satirical artwork, the difference between satire and stereotype, and the intersections of Black satire and politics in works by Ollie Harrington and Robert Colescott.

Going There: Black Visual Satire is now available wherever books are sold.