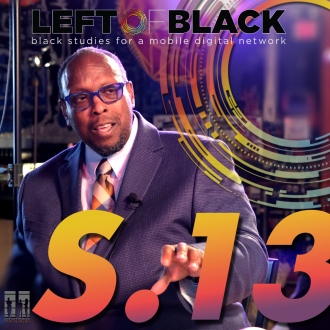 Left of Black, the longest-running web series at Duke University, will return for its 13th season, produced by the John Hope Franklin Humanities Institute (FHI). The season premiere, a pre-recorded in-person event at NorthStar Church of the Arts that featured Dr. Farah Jasmine Griffin and Grammy-nominated jazz vocalist Nnenna Freelon, will re-stream on October 13 through FHI’s YouTube channel. FHI began producing the series at the very beginning of 2020, just a couple months before the global pandemic started. At that time, the Institute’s multimedia director, Eric Barstow, took on the charge of director-producer for the series. He is now eager to embark on his fourth season with Left of Black. During the pandemic, FHI, like all other Duke entities, had to pivot to working remotely. For the series, this meant conducting interviews virtually to be edited later. Now, in 2022, Barstow, an alum of Duke’s MFAEDA program, is eager to fire up in-person production once again. “My approach with the show, as with events at FHI, will be hybridized. Interviewing remotely afforded wonderful conversations with scholars regardless of location," Barstow said. "But face-to-face interaction brings a certain energy that is hard to replicate in a fully digital space."

Upcoming episodes will feature diverse discussions such as with documentary filmmaker and anti-sexist activist, Byron Hurt, whose new film, Hazing, premiered on Independent Lens on PBS earlier in September. Additional guests will include author Dorothy Roberts, who will discuss her book Torn Apart: How the Child Welfare System Destroys Black Families–and How Abolition Can Build a Safer World, published by Basic Books, as well as former hip-hop producer and industry legend Sophia Chang.

Stay tuned in to FHI's website and Left of Black's social media for further release details. In the meantime, check out the full video archive of Season 12 and a reflective essay by Left of Black social media coordinator and Duke PhD student Alexis Ligon Holloway.