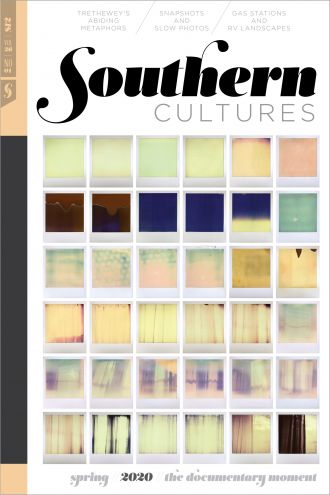 The inaugural John Hope Franklin Lecture appears in the latest issue of Southern Cultures, a peer-reviewed journal published by the University of North Carolina Press for the Center for the Study of the American South.

Pulitzer Prize-winner and two-term Poet Laureate of the United States Natasha Trethewey delivered the first John Hope Franklin lecture on March 21, 2018. She adapted it into an essay titled “You Are Not Safe in Science; You Are Not Safe in History: On Abiding Metaphors and Finding a Calling” for the Spring 2020 Southern Cultures issue, The Documentary Moment.

“When I was three years old, I nearly drowned in a hotel pool in Mexico,” she begins her essay, which explores the genesis of her poetic understanding through her family history. The daughter of a black mother and white father, Trethewey was born in the 1960s in segregated Mississippi, and dominant narratives of the South shaped her childhood experience. “Through the misuses of history, the creation of 'hallowed' falsehoods, as historian John Hope Franklin pointed out,” she writes, “the white South found the intellectual justification for its determination not to yield on many important points, especially in its treatment of the Negro.”

In her poetry, Trethewey works to reinscribe the history of the South in collections such as Native Guard, which memorializes the role of black soldiers on the Mississippi Gulf coast during the Civil War, and which she discussed with Duke University students during her visit in 2018.

"Through her deft use of metaphor and personal narrative, Trethewey's talk elegantly reflected John Hope Franklin's call to scholars to 'use [one's] history and ingenuity,'" wrote Southern Cultures Executive Editor Ayse Erginer, who attended the lecture on March 21, 2018 and approached the Franklin Humanities Institute about the possibility of publishing it. "The rigor of Trethewey's practice and the precision and imagination of her prose was on full display that evening. Five minutes in, I knew we had to have a version for Southern Cultures."

The issue is available for purchase on the Southern Cultures website, and students and scholars can access it for free via Project Muse on university library websites.