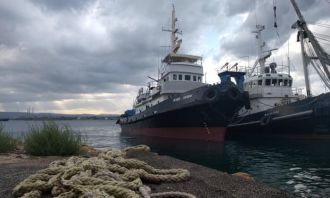 Social Movements Lab co-directors Michael Hardt and Sandro Mezzadra have announced a new project: they are seeking to provide humanitarian aid and protest Italian policies towards migrants with a rescue ship called the Mare Jonio. Their op-ed, "We’ve launched a migrant rescue ship to resist the racist right in Italy," was published on The Guardian website on October 9, 2018.

Events related to this project will take place in the Social Movements Lab on October 10 and October 15, 2018.

We are part of an activist project that launched the Mare Jonio, a rescue ship that is now motoring toward the “search and rescue” zone off the coast of Libya. In contrast to rescue ships operated by humanitarian NGOs, which have been blocked in recent months by the Italian government, the Mare Jonio flies an Italian flag and is mainly operated by an Italian crew. It can thus not legally be refused entry to an Italian port.

We also created a platform, Operation Mediterranean, which coordinates the entire operation. It also supports our wider goals: to foster discussion and promote action to contest current migration policies and to challenge the aggressive atmosphere of racism. The platform’s website provides extensive information about participants, supporters, and funding.

We joined this mission because of our desire not only to help provide humanitarian aid for those who risk death at sea but also to intervene in the toxic political atmosphere of Italy, Europe, and beyond. Faced with a seemingly interminable state of emergency in which governments enact racist and reactionary policies, often with the support of electoral majorities, we need to protest against them and resist them to protect the vulnerable, and defend past gains.