Statement on the Ongoing Events Following the Murder of George Floyd 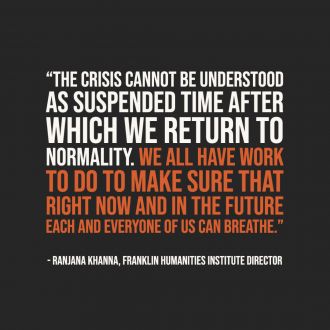 Writing in the final chapter of Black Skin, White Masks in the spirit of international anti-colonial resistance, Frantz Fanon, psychiatrist and activist explains the “refusal to accept the present as definitive.”  Why does one revolt? he asks. “It is because ‘quite simply’ it was . . . becoming impossible . . . to breathe” (226). The words we all know, “I can’t breathe” that we recognize on t-shirts and on posters quoting Eric Garner are now back on our lips as the world watches US police brutality, and protests in solidarity. We are called upon to understand the functioning of metaphor and horrifying moments of demetaphorization—for some of us breathlessness is a matter of metaphor, for others it is the reality or the threat of breath leaving our bodies. In this period of Covid-19 induced suspended time, when we witness the racialization of health in stark ways in the United States, including the disproportionate numbers of African-Americans dying, we see the extended time of police brutality on video as we witness the nine-minute execution of the unarmed George Floyd for an alleged minor crime.

Many of us have studied, witnessed, experienced or stood in solidarity before, of course, and have been disgusted, revolted, unable to breathe, and have taken to the streets. How much do existing humanistic analytical frameworks help us understand the singularity of this moment, of this death, and of this man George Floyd? The language of Fanon (we revolt because we can’t breathe), of Martin Luther King (“a riot is the language of the unheard”) of Pauli Murray (“negroes are fed up”) have all registered a sense of exhaustion—their words tell us: we don’t have the right to breathe, we tried to speak but we haven’t been heard, we’re fed up fighting in the name of liberty, only then to have our own freedom stifled and denied.  And the responses to protest are so familiar in our collective modern histories—these policemen are bad apples we’re told, when it appears as if the system is rotten to the core. Peaceful protest is met with rubber bullets and tear gas and now, on the 99th anniversary of the Tulsa race massacre, those who protest have been threatened with the invocation of the 1807 insurrection act. States of emergency brought in to curb protests in the name of security seem to be happening all over the world in recent years—witness the police brutality in curbing protests against the citizenship amendment act (CAA) and national register of citizens (NRC) in India, for example—and surveillance is part of our everyday lives. The camera, as has been discussed at length by scholars and practitioners of visual technology, can be a tool to reveal but also a weapon.

Artists have responded to surveillance in the context of police violence by addressing technologies and archives of the visual. One might think of recent works like Arthur Jafa’s Love is the Message, the Message is Death or Isaac Julien’s multiscreen Lessons of the Hour—Frederick Douglass, both of which address the racial legacy of technology and the image and their relationship to death. Staging Douglass’ “Lecture on Pictures” to consider how old and new technologies of the visual change social relations, Julien’s work takes the viewer from Douglass to Black Lives Matter, referencing along the way his own early work from 1983 Who Killed Colin Roach? about the killing of Colin Roach, a 23 year-old black man in a police station in London’s East End. Scholars have written copiously on the problem of the systemic forms of repetitive fatal discrimination. One can cite the scholarship of our colleagues, the late John Hope Franklin (explaining how discrimination is a matter of policy not simply a breakdown of law), Wahneema Lubiano (writing of “the house that race built”), Priscilla Wald (on the paradoxes of the story of race and what it means to be constituted as an American), Thavolia Glymph and Patrice Douglass (on racialized and gendered violence), Adriane Lentz-Smith (on police murder and civil rights history), Mark Anthony Neal (on the challenges of black masculinity), and Karla Holloway (on black death). Journalists, activists, and scholars alike have called for international solidarities.

Ethically we are compelled to understand not only the persistence of violent criminalization, but also the singularity of this murder of George Floyd; the invitations to say his proper name are a call to that necessity. And that singularity is also one that asks us to consider the particularity of the time we live in, when the fragility of the world system has been revealed to us in stark ways, and that murder can be enacted even through a simulacrum of order. This crisis—the murder of George Floyd in a pandemic moment—reveals something of the temporal logic of “urgency.” The crisis cannot be understood as suspended time after which we return to normality. We all have work to do to make sure that right now and in the future each and every one of us can breathe.

I, and the faculty board of the John Hope Franklin Humanities Institute, are committed to doing some of that work through the humanities, arts, and interpretive social sciences. My inbox is open. In solidarity. Black Lives Matter. RIP George Floyd.