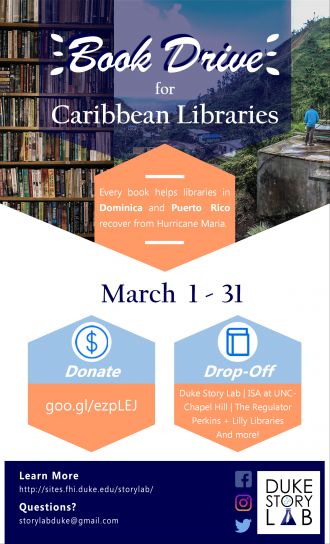 During March 2018, the Duke Story Lab is holding a book drive for Caribbean libraries in Dominica and Puerto Rico whose collections were damaged by Hurricane Maria, with the goal of collecting 1000 books and $5000.

Laura Wagner, PhD in Anthropology and Project Archivist for the Radio Haiti Archives at the David M. Rubenstein Rare Book and Manuscript Library, explained to us how she arrived at the idea of a book drive, why she chose to partner with Duke Story Lab, and why it’s important to share stories about the Caribbean that go beyond disaster. This interview has been edited and condensed.

What led you to the idea of a book drive?

It goes back to December 2016, when I attended the Caribbean Digital Conference in New York City. I heard Dr. Schuyler Esprit, who runs the Create Caribbean initiative at Dominica State College, take about an impressive digital archive project she had undertaken with a small team of undergraduates and high school students, using open source software. Seeing how much they could do with limited resources was incredible.

I followed her on Twitter, and after Hurricane Maria, I was watching her feed to see what was happening. She tweeted that the university and the public library in Roseau needed books. I thought, “Everyone I know is a writer, academic, or librarian. I bet I could get books.”

What made you decide to partner with Story Lab?

They offered! I put it on Facebook, and Eileen [Chow; Story Lab co-director] reached out to me. She asked about helping libraries in Puerto Rico in addition to the targeted intervention in Dominica. I talked to people I knew in Puerto Rico, and we settled on the library in Loíza [Biblioteca Pública Municipal de Loíza] after Beatriz [Riefkohl-Muñiz, Associate Director of the Institute for the Study of the Americas at UNC] put me in touch with them.

It sounds like your scholarly and social media connections paved the way to funnel help where it was needed.

In this case, we were trying to respond to needs that libraries in the Caribbean have articulated. What is helpful in the aftermath of something like this? We didn’t want to jump in and start doing it immediately; we wanted to make sure there were shelves to put books on. This is why we’re doing it six months after the hurricane. In an immediate humanitarian emergency, it’s not something you need right away, but it’s important for long-term recovery.

Story Lab is a good partner because they understand the importance of diverse representation and amplifying voices that are usually underrepresented. In our book drive, we’re focusing on books by and about people in the Caribbean, books with protagonists of color or about the African diaspora, books in Spanish, textbooks, and YA books. We’re respecting the wishes of the libraries we work with.

What else do you want people to know about this project?

When there’s a situation in which people are suffering, while our initial focus on the emergency is necessary, it erases the complexities of people’s biographical lives and internal lives. US Americans can end up thinking of people as victims, and only as victims, and not as people with narratives that need nourishing. Storytelling is important, and so is having access to books and stories and knowledge.

They have voices. They’re engaging in storytelling and intellectual production. They’re not just disaster victims.

To learn more about the book drive and how you can contribute, visit the Duke Story Lab website.