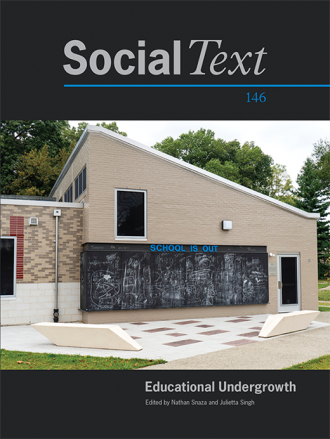 After leading a team of undergraduate student researchers who examined Duke University’s entanglement with the tobacco industry during the summer program Story+, Eli Meyerhoff and Ph.D candidate Jaime Acosta Gonzalez have published a related article in the latest issue of the Duke University Press journal Social Text.

"Stained University: Reckoning with Duke’s Nexus of Higher Education and Tobacco Capitalism” traces Duke University’s journey from its tobacco-funded founding to its tobacco-free campus today. The article highlights the university’s role in promoting a biopolitical narrative that focuses on an individualized subject’s responsibility for “poor health decisions” and lack of access to higher education, instead of the ways in which institutions and industry have historically produced and perpetuated these inequalities in the pursuit of higher profits. Meyerhoff and Gonzalez argue that this is a capitalist response to indigenous and Black-led resistance movements, which they trace back to colonial America through to the postslavery university and the Civil Rights Movement to today.

“My idea for the Story+ project came from seeing Duke’s becoming a ‘smoke-free campus’ as a great opportunity to reckon with the university’s entanglement with the tobacco industry,” Meyerhoff wrote. “During rich theoretical and historical discussions with Jaime throughout Story+, we decided to channel our conversations and research into an article. Also, one of our undergraduate collaborators, Caroline Petronis, continued this research, co-writing an op-ed (“Who trusts a tobacco-stained university in a pandemic?”) in the Duke Chronicle.”

The student team used digital mapping software to represent their research into the university’s historical ties to tobacco—for instance, the social networks between the tobacco industry and Duke University trustees, administrators, faculty, and researchers.

"We love seeing and supporting the afterlives of Story+ projects,” wrote Story+ co-director Amanda Starling Gould. “This article illustrates exactly what we hope Story+ can be: an interdisciplinary home for humanities experimentation that grows into active research inviting audiences to engage real-world issues."

Eli Meyerhoff joined the Franklin Humanities Institute in 2017. He is the author of Beyond Education: Radical Studying for Another World (University of Minnesota Press, 2019). During his time at FHI, he has convened a conference on abolitionist approaches to the university and a workshop on Piedmont biocapitalism. The former manager of the Social Movements Lab, he currently manages the Health Humanities Lab, where he supports programming on disability rights, health care, and social justice.

Jaime Acosta Gonzalez is a Ph.D. candidate in the Program in Literature. His research focuses on post-45 U.S. and Latin American literature, Marxist critical theory and contemporary photography. A former Social Movements Lab affiliate, he and fellow graduate student Alexander Strecker organized an FHI-sponsored dialogue series between photographers and academics during the 2019-2020 academic year.

You can access the article via Duke University Libraries (Duke NetID log-in required) or Academia.edu.